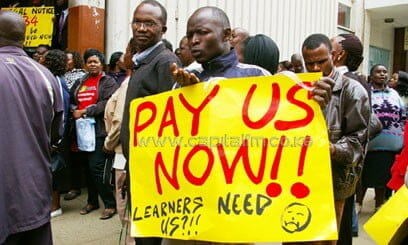 The decision by the Teachers Service Commission (TSC) not to pay teachers their September salaries could be final. Yesterday, sources at TSC maintained that the decision to stop salaries of more than 245,000 out of 288,060 may not be reversed. The teachers’ employer only paid 42,973 teachers.

Most of the teachers who were paid were principals, their deputies and heads of departments who were in schools during the strike that started when schools re-opened for the third term in September and only ended a week-and-half ago following a court order.

The TSC also declined to submit about Sh16 billion to financial institutions for two months in deductions from teachers for loans. The Kenya National Union of Teachers (Knut) and the Kenya Union of Post Primary Education Teachers (Kuppet) have not received Sh340 million in membership dues for two months.

The unions have failed to pay their workers across the country since they rely on the deductions. On Sunday Knut Secretary-General Wilson Sossion said the commission has a duty to respect court rulings.

“The TSC has to pay teachers their September salaries. As of now, it is still withholding third-party dues and union deductions. We will not hesitate to move to court to demand action,” said Sossion.