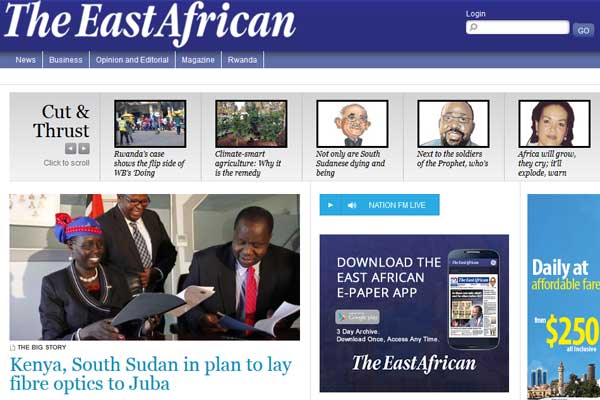 Tanzanians are mad! They are now avenging. It is shocking that the East African paper has been controversially banned in Tanzania. But this is a beef Obama created and if something is not done things will  spin out of control.

It all started after Kenya put a ban on Tanzanian-registered vehicles from dropping off or picking up passengers at JKIA on allegations that Tanzania had continued to deny Kenyan registered vans to take tourists directly to Tanzania airports and national parks.

Minister for Natural Resources and Tourism, MP for SingidaNorth Constituency, and Member of National ExecutiveCommittee of ruling CCM.The United Rep of Tanzania – Lazaro Nyalando went into a ranting spree by tweeting that Kenya and Tanzania should not create enmity. This is what he said

Plans to terrorize Tanzania were hatched by the Jubilee government and it is time Uhuru acted if not today NOW. We need Tanzania.

The reality is that there have been plans to terrorize Tanzania by the Kenyan government. The enmity between Kenya and Tanzania surged when President Barack Obama decided to Visit Tanzania and skip Kenya.

This did not go down well with president Uhuru’s political kitchen that promised to punish Tanzania for this. According to sources, the situation was worsened when President Barack Obama decided to make Jakaya Kikwete the point man in the region. President Uhuru quickly swung into action by mobilizing all other African nations to show that he is not only powerful in the region but the entire Africa.

There was a meeting in one of Kenya’s popular hotels and a resolution to sideline fellow EAC members Tanzania and Burundi was arrived at. This even led to the formation of the so called ” Coalition of the willing ” comprising Kenya, Uganda and Rwanda- Tanzania was sidelined even after protesting .

President Obama realised the mistake he made and was key in the making ICC clear Uhuru because the relationship between USA and many African states started being shaky. The USA political schemers also realised that Kenya cannot be ignored.

So Tanzania is trying to fight Back but using the wrong method. The Daily nation is not a government institution. Soon Tanzanians will ban Kenyans from Accessing their land. The argument that the East African newspaper“has been circulating in the country without having registration, contrary to section 6 of the Newspaper Act number 3 of 1976”. Is useless and insincere. For 20 years ? You realised today ?