There is nervousness among Jubilee MPs in the Tanga tanga faction as  President Uhuru Kenyatta calls for National Assembly Parliamentary Group meeting on Monday.

Through a text message, the law makers have been directed to avail themselves at KICC by 9 am.

“I wish to invite you for a Jubilee Coalition, National Assembly Parliamentary Group Meeting at Kenyatta International Conference Center, on Monday 22nd June 2020 at 9am. Please be punctual,” the message read.

In the scheduled meeting, National Assembly Majority Leader Aden Duale will know his fate. Many politicians allied to the DP William Ruto have been kicked from party leadership and parliamentary positions. 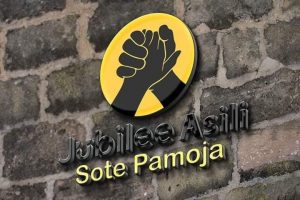 Jubilee Asili signage at the parallel address in Kilimani. [p/courtesy]

The one time loud Duale who admitted to be DP’s sycophant survived,  Jubilee vice chairman David Murathe hinted Duale might lose his position.

“When members asked about the position of the Majority Leader, the President said ‘Let’s leave that for now… so it was left in abeyance… and I think it will be dealt with during the next meeting,” Murathe said.

Duale survived after 25 MPs rallied behind him when it emerged that there was a fresh push to oust him .

The Garissa Township MP is under pressure from the Kieleweke faction of Jubilee, disillusioned that the president had retained him as leader of Majority.

Kieleweke MPs have been collecting signatures to oust him as Uhuru reins on Jubilee politicians perceived to be disloyal.

Politicians allied to the DP held a meeting at the new address as they said the original Jubilee manifesto will be implemented from there.