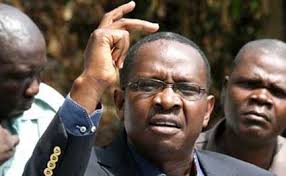 Uhuru Kenyatta has been urged to tame his TNA secretary general Onyango Oloo from interfering with parastatal heads in Western Kenya particularly Nyanza region.
Under the banner ‘Uhuru Tena”, youths took issue with Oloo for stagemanaging troubles in the said outfits in order to have his way.
They singled out the troubled Lake Basin Development Authority where the managing director has been suspended for not towing the secretary general orders to award tenders to his cronies and two wives.
The wives in question are currently driving top of the range vehicles with close series of number plates.
During presidential visits, his two wives will always be spotted welcoming the president and sitting near him at the main dais all to hoodwink him that he has serious women caucus in the area.
Currently, Oloo has allegedly gone to cause trouble at Lake Victoria South Water Board where the CEO who was just confirmed two months ago is being armtwisted to run things without due diligence as required by the procurement law. The CEO late last week got into their dragnet when he was suspended for unspecified period on grounds that he was running a parallel payroll where Sh14 million had been lost.
But according to a source at the usually stable water board, the suspects who were involved have since been fired by the besieged CEO but mandarins are said to be enjoying Water and Irrigation cabinet secretary Eugene Wamalwa’s support have promised to use their proximity to him to bring the CEO down.
One of the mandarins was recently overheard in one of the Nairobi hotels bragging how the unsuspecting minister has vowed to appoint a new CEO who can play ball than Agumba.
During the recent presidential visit, one of the board members requested that the institution give him Sh1 million for mobilisation but the institution is said not to have bought the idea which bordered extortion.
At the time of going to press, the CEO was contemplating seeking legal redress to thwart the machinations to remove him in his office illegally.
Debacles marooning nominated TNA senator Joy Gwendo are also attributed to Oloo. It is alleged that the Oloo feels that he advocated for her to land the lucrative position but the senator seems not to be reciprocating and no small wonder, the drastic fallout, according to the senator.