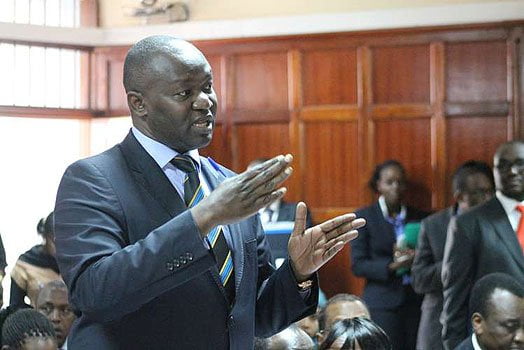 Tainted Nairobi Lawyer Tom Ojienda has been under social media heat after it emerged that he had lost a claim of Sh94 million from the Nairobi county government for legal services he offered six years ago.

The lawyer, a senior counsel, wanted Sh94,415,185 but the Employment and Labour Court’s Deputy Registrar said he should be paid Sh448,328 exposing how these lawyers walking in designer suits are conmen who rob without violence.

Social media users went ham on the lawyer questioning his past deeds.

For decades now, Ojienda has handled almost all of Kidero’s financial dealings. Authorities have intimated that Kidero’s vast wealth, estimated at over Sh9 billion, is far beyond what he could have earned during his working career.

At one time, the lawyer was arrested over Tax arrears that he said were false. On its part, the KRA said it wanted Prof Ojienda to settle tax arrears amounting to Sh823 million.

Court papers showed the KRA had two claims against Ojienda, one for Sh444 million as total tax due between 2009 and 2016; and another one amounting to Sh379 million for the period 2011 to 2016, periods through which Kidero was at the helm of Mumias and Nairobi County Government respectively.

For a long time, the lawyer has cultivated a clean image yet he profits off manipulating legal fees and targets government institutions with some malicious claims tilting to his favour.

A few days ago, National Land Commission (NLC) lost a bid to stop him from demanding a Sh166 million payment for legal services his law firm offered in 2014.

Also, the lawyer is seeking to be paid Sh75 million by the Nairobi county government for services rendered during governor Evans Kidero’s tenure.

Breaking News > @ProfOjiendaTom has lost a claim of Sh94 million from the Nairobi county government for legal services he offered six years ago. The court term fees exaggerated and reduced it to Kshs 150,000. 😂😂😂😂

I need to understand, why all this entitlement about going to law schools amongst the lawyers.Does it mean law is a divine learning ,a course accessed by a sect of some https://t.co/po3jRziYAS it an occultist adventure?

We don't need to go to law school to understand the law .

It has come to the limelight how Professor OJienda and Kidero used corrupt judges to steal 93.9milliom from Nairobi County. A Nairobi court has ruled that 93.9million legal fees claimed by Prof Tom Ojienda is a gross exaggeration for..#TheLearnedgodfatherOfCorruption pic.twitter.com/i8egp9X1Uw

Former Governor Evans Kidero and Professor Ojienda managed to rob Nairobi county of 93.9 million by using the courts. By then Prof Ojienda who was a member of JSC and Kidero the Governor were under investigation for their role in financial collapse of Mumias Sugar Company pic.twitter.com/yvpu0o5b8Z

When I tell you crooks like @ProfOjiendaTom and @ahmednasirlaw hide behind “ legal fees “ to steal taxes , I called names. Cc @lawsocietykenya https://t.co/5B5Tfj6ZyD