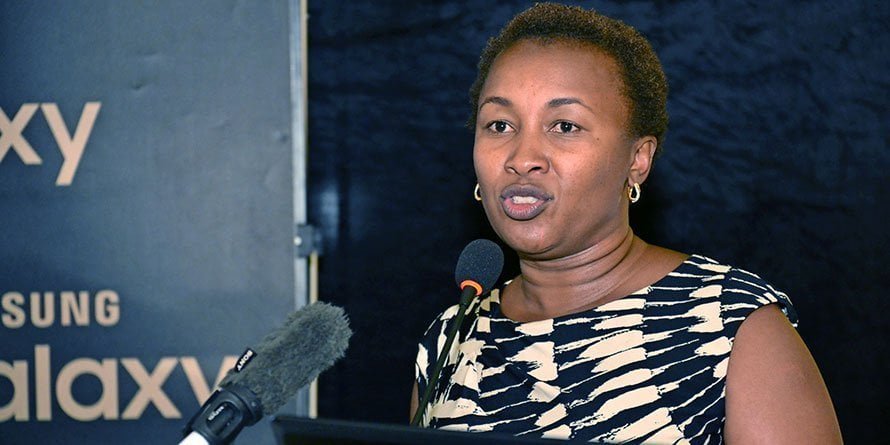 This meant that the murderer and empty-head Sylvia Mulinge has once again been bypassed, and it is for good reasons.

It is a joke to even compare the credentials of Peter Ndegwa and Sylvia Mulinge. That was a stupid dream, laughable in the least.

Sylvia cannot manage anything, she’s been at the helm for stealing ideas from ordinary Kenyans and such a person who has risen and stayed at the top through deceit and other means shouldn’t speak in the table of true ladies.

Safaricom’s Chief Customer officer Sylvia Mulinge was accused of murdering a minor in Kibera while driving under the influence.

The crisis mushroomed from a high-speed road crash that resulted to the death of a poor minor resident in the slums of Kibera adjacent to the Southern bypass in Nairobi caused by a sleek vehicle driven by Mulinge
The vehicle, a top of the range Toyota Prado KBU 483M, had/still has Safaricom Ltd registered as its legal owners.

Mrs Sylvia Wairimu Mulinge, then Safaricom’s Director for Consumer Business, was involved in the fatal accident allegedly caused by reckless drunk driving resulting in the death of young Mary Kusa Etale who was a minor living with her parents in Kibera.

Mrs Mulinge, in conspiracy with her bosses, then went ahead and kept the crash secret contrary to Vodafone’s strict Occupational Health and Safety (OHS) policy.

The accident was itself a bold violation of a core section of Vodafone’s “Absolute Rules” on OHS which demands that employees must “never exceed speed limits or travel at speeds that are dangerous for the type of road, vehicle, or conditions”.

Eyewitnesses claim Mrs Mulinge was speeding while overtaking a stationary truck at the time of the accident which happened in an area known as “Raila Village” which is known to have high pedestrian traffic. She was drunk and staggering at the time.

The scandalous Safaricom top duo then went as far as attempting to bribe the parents of the deceased through an out of court settlement with a paltry offer Kenya shillings 950,000/- which betrayed the value they attached to the late Mary’s life.

To make matter worse, correspondence prepared by lawyers acting for the deceased family suggest Mrs Mulinge and Mr. Collymore of illegally influencing law enforcement officials to avoid thorough investigations as to the cause and circumstances of the fatal accident.

Kenyans, using social media tools and the internet, managed to push the then Director of Public Prosecutions Keriako Tobiko to review this case, leading to an order being issued demanding the arrest of Mulinge. But mulinge managed to influence the system, bribing judges and her case dying. We will keep reminding the no-nonsense Noordin Haji to re-open the case.

Apart from the murder saga, Sylvia Mulinge was mentioned many times in the Safaricom KPMG report that exposed the rot within Kenya’s most corrupt company, Safaricom. The scandal involved a company called Fibre Space LTD and Miss Mulinge.

Fibre Space Ltd was single sourced by Safaricom to roll out a system for electronic payments in the transport sector. This is the project known as the cashless payment system for matatus in Nairobi.

KPMG established that there was no request for proposal (RFP) issued nor vendor selection (tendering process) done for this partnership. During this same period, KPMG also established that Fibre Space was actually having discussions with the head of the business unit Sylvia Mulinge. To the shocking surprise of the auditors, accountability documents related to this contract seem to have disappeared into thin air after payments were made to Fibre Space for a total of USD 6.46 million living Safaricom with a dead stock of unusable cards.

In this article:Safaricom, Sylvia Mulinge