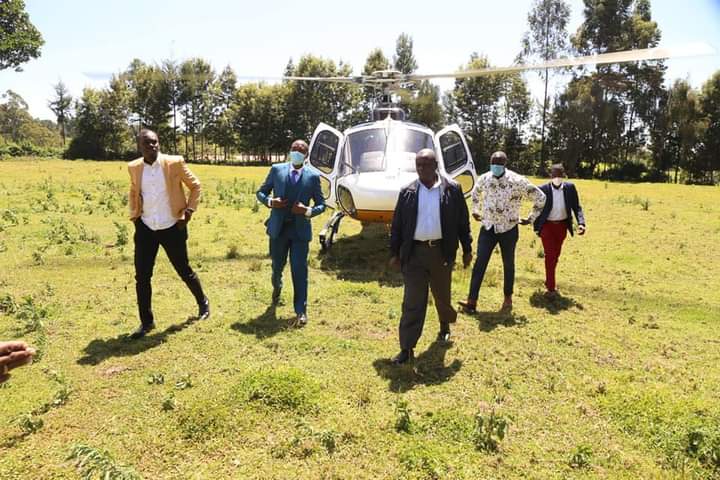 CAPTION: MPs Sylvanus Osoro, Rigathi Gachagua and their associates alight from a chopper in Nyeri where they left a meagre donation

For the better part of the weekend and possibly in the coming days, South Mugirango MP Sylvanus Osoro seems to be enjoying extensive media coverage to his blossoming political career.

Hours after a viral fistfight with his Dagoretti North counterpart Simba Arati during a funeral at Tandere Grounds in Kisii County on Monday, reports have now emerged that the legislator quickly gaining fame as a loyal foot soldier of Deputy President William Ruto on Tuesday flew hundreds of kilometres to donate a meagre amount of money at a funeral.

According to popular Twitter blogger Pius Kinuthia, MP Osoro, accompanied by Mathira representative Rigathi Gachagua, landed in Itundu Village, Nyeri County in a sleek, shiny chopper only to leave a mere Ksh. 15,000 to the bereaved family.

This left netizens rather confused since it makes little sense why the two politicians accompanied by their legion would waste a chopper ride which costs hundreds of thousands to hire only to make such a light appearance at an event which was ultimately engulfed by local political talk.

Rigathi Gachagua and Sylvanus Osoro today landed in Itundu Village in Iriaini Ward for funeral in a chopper and left a total of 15K to the bereaved family.

“A thief and a wash guy! The ones Arati was addressing. Soon, they will pay for their crimes,” one added.

“I think their chopper was too fast; it landed at the funeral ahead of the MPESA message from Karen,” another wrote in the replies.

“The hustlers, kwani it’s only 1 chopper? Where are the choppers for the rest of the mourners, ama walikuja na wheelbarrow?” wondered another.