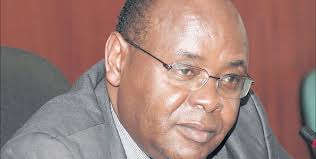 The suspended Geothermal Development Company Managing Director, Dr Silas Simiyu, has been ordered to appear in court on Friday next week.

Kibera Magistrate Bryan Khaemba Friday directed that Dr Simiyu and his accuser, Mr Patrick Kinyua, to be present for a ruling on whether the case should continue.

The court is expected to decide on whether Mr Kinyua should institute private prosecution against Dr Simiyu for abuse of office during his tenure at the company.

Mr Kinyua has alleged that concerns against Dr Simiyu were reported to the Ethics and Anti-Corruption Commission (EACC), Parliamentary committees on Energy and Public Investment but no action has been taken so far, hence the need for the court’s intervention.

In his response, Dr Simiyu said Mr Kinyua is aware that investigations are ongoing and that, the decision on whether or not to prosecute him can logically be taken upon completion of the investigations, and evaluation of the evidence by the office of the Director of Public Prosecution.

The same applies to some members of staff.

However, Mr Kinyua said that the basis of the intended charges is not the corporate structure of GDC, but individual actions of Dr Simiyu, which attracts criminal liability.

“The fact of pending investigations is not a bar to commencement of charges as the application is based on valuable facts and evidence that require no further investigations,” Mr Kinyua said.

Mr Kinyua noted that the response is evasive and clearly intent on diverting the court’s focus from the issues raised. He said that it is not even clear from the letters before the investigating agencies on what charges Dr Simiyu is being investigated on.

“Whereas that may result to other charges against Dr Simiyu, my application is specific on the allegation against him and the charges proposed to be brought against him,” Mr Kinyua.

He added that Dr Simiyu has failed to produce in court, the statement he recorded and the court would therefore be unable to determine whether or not he has responded to the allegations of criminality brought against him.