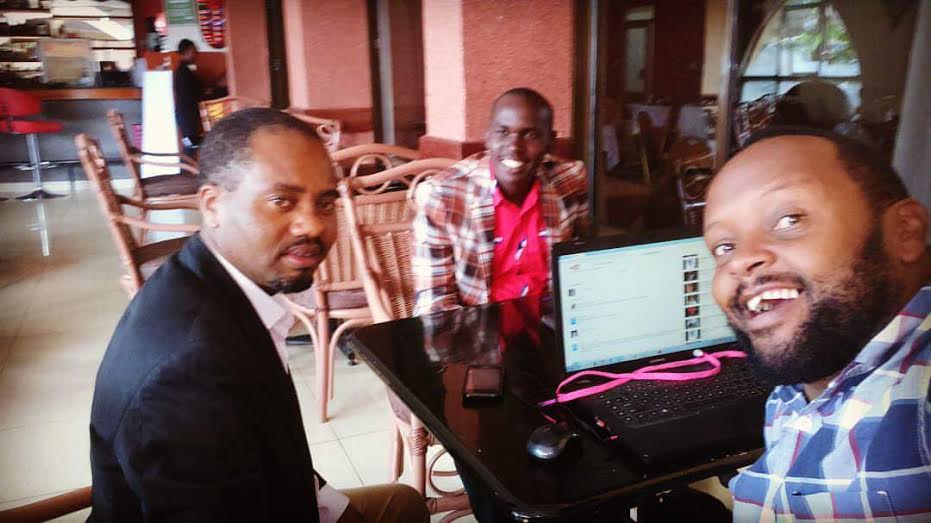 Caption: Antony Kimathi (in red shirt) Manager of the Sunstar Hotel, Garden Estate off Thika Road, pictured with some members of the press.
A Hotel in Nairobi has accused the Niger National Team of failing to pay for cancellation charges following a delay in their arrival.
Anthony Kimathi the manager of Sunstar Hotel in Garden Estate off Thika Road revealed to members of the media that the team departed out of the country without honoring their obligations to the hotel.
“Yes we hosted the Niger National Football Team for their training camp enroute to Rwanda for the upcoming CHAN Tournament in Rwanda, but the team left without paying an entire day’s full-board booking,” a frustrated Kimathi was quoted as saying.
The General Manager of the hotel, flanked by this Finance Manager quipped that the hotel has a stringent cancellation policy.
“There was confusion as regards to payments. The Niger Sports Ministry official who was paying the bills carried an invalid credit-card that had a limit way below what they spent in Nairobi,” said Mr. Kimathi.
Sunstar Hotel is a popular destination for old rich men wishing to engage in clandestine activities with their underage girls.
It is also a haven of corruption by several County Government officials who thrive on the inflated bills provided by the management of the hotel for dubious seminars and meetings.
Amongst their core-clientele is Meru and Kirinyaga County Governments. ‎
Would you like to get published on this Popular Blog? You can now email Cyprian Nyakundi any breaking news, Exposes, story ideas, human interest articles or interesting videos on: [email protected] Videos and pictures can be sent to +254 710 280 973 on WhatsApp, Signal and Telegram.