If you search Twitter about the recent visit by musicians Mya, 112 and Ginuwine, you’ll see the true extent that Daystar has contributed in fanning mediocrity in the Kenyan media and by extension, the Kenyan society. Many media houses and “alternative” blogs like Nairobi News and Mpasho (all being online extensions of mainstream media mediocrity) are focusing on Chris Kirubi’s invitation to Mya on a date, in what clearly looks like a Dam, but is being referred to as a lake. 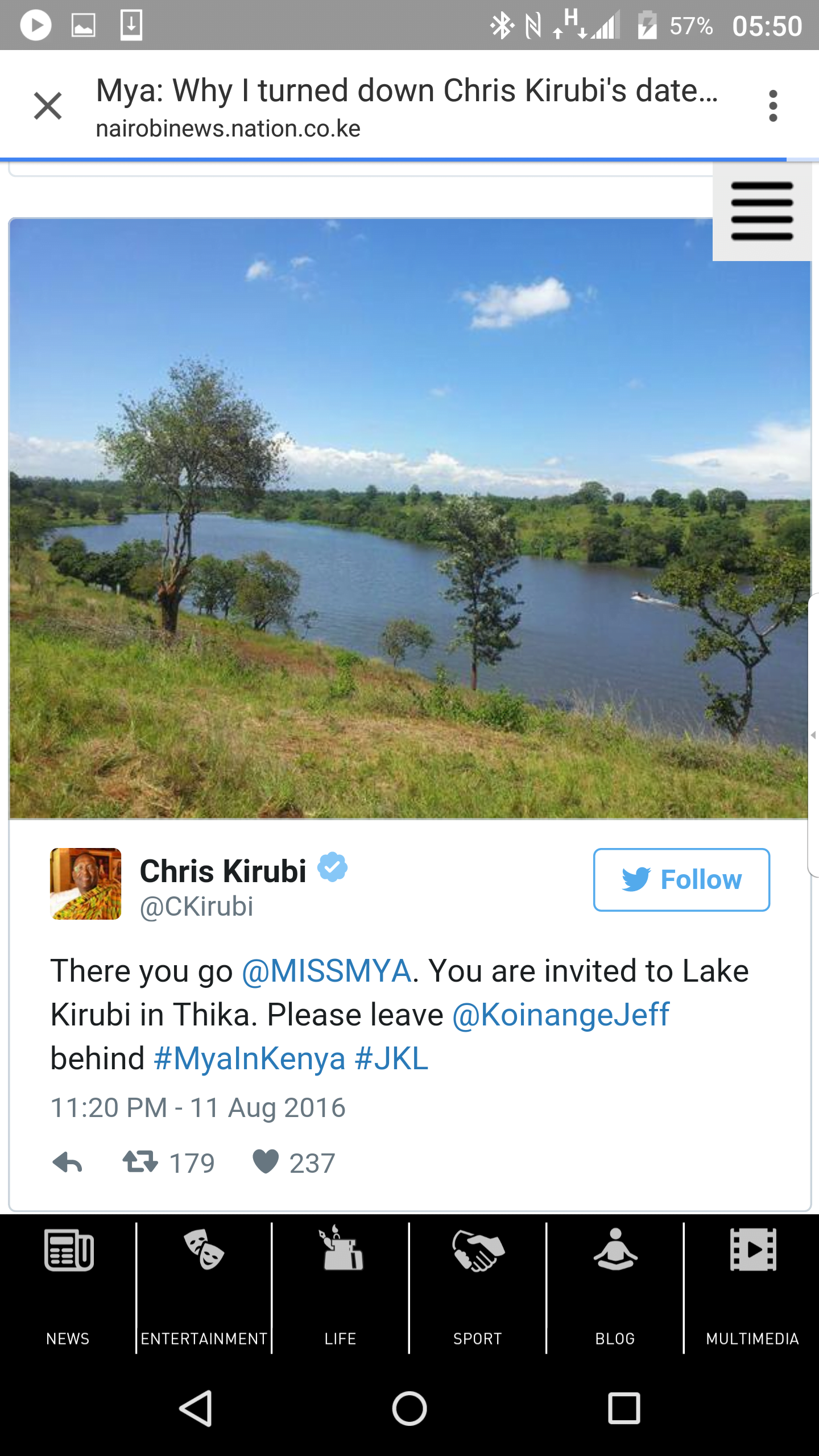 Caption: the so-called “lake” that was supposed to impress mya who probably travelled more countries at by age 25 than Kirubi at age 75.

We have for long spoken about the lack of global awareness by Kenyans, who prefer to spend their days tuning in to radios that play shit music, and listen to pathetic commentary by retarded radio show hosts, whose only agenda is to promote consumerism and dumb-down the general population by glorifying materialism.

We have asked Kenyans who want to be in-sync with the rest of humanity, to totally avoid any association with mainstream media operatives in Kenya, because they’re honestly extremely dumb beyond measure. Their inherent stupidity is contagious and those who associate with or lend them their ears, stand the risk of also being lumped up in the same cycle of stupidity.

For instance, America is at a cross-roads right about now. Black Lives Matter is a grassroot movement started in Ferguson Michigan after the killing of an unarmed black boy called Trayvon Martin. The movement has gained traction and is now being endorsed by many performers, the most prominent being Beyonce whose currently on tour for her “Formation” album, which features dedications to the movement.

Secondly, America is in the middle of a bruising elections pitting Donald Trump vs Hilary Clinton, both of whom subscribe to different political ideologies which will ultimately have an impact on America’s foreign-policy. This will directly affect the entire world as the United States is a global trend-setter and when they sneeze, the rest of the world catches a cold.

Thirdly, Mya has just been hob-nobbing around night-spots, after their aggressive and creative owners went out of their way to draft her for photographs with their loyal patrons and customers. The imbeciles at Brand Kenya Board and Kenya Tourism Board starting with the overrated Julie Gichuru haven’t thought about engaging Mya as a brand ambassador for our country and our products. By now, she should be posting Instagram pictures of her watching Olympics and cheering Kenyan athletes. She won’t do it for free though. 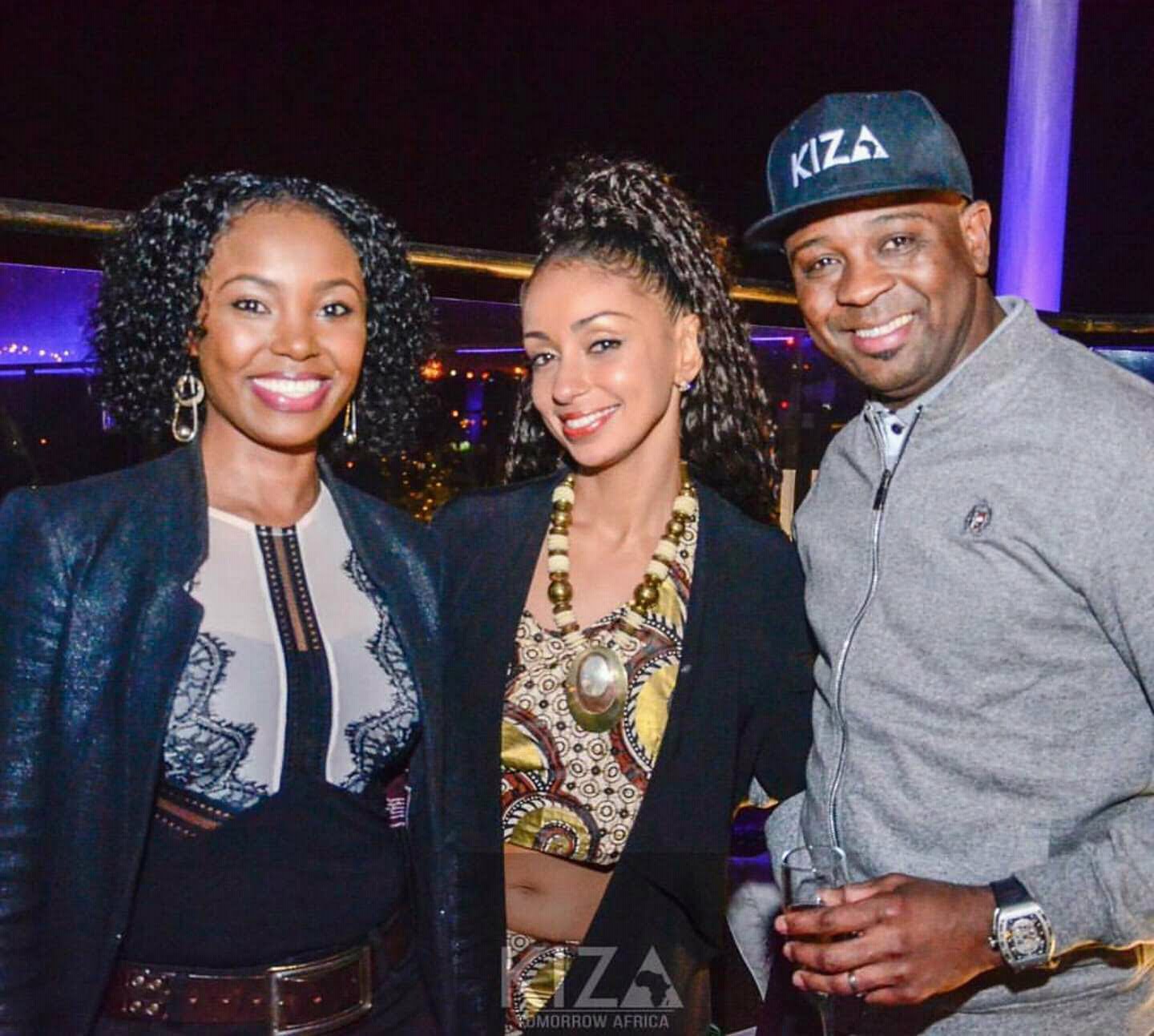 So why is our tax money being used to fund sterile boards like BKB and KTB? Are we paying salaries for basic bitches like Julie Gichuru to self-actualise or serve the nation? While other countries are effectively using online influencers and prominent personalities to market, in Kenya, these institutional retards like Chris Kirubi who chairs the Brand Kenya Board only wants to have sex with Mya? Had he tweeted Mya that he wants her to endorse Kenya as an ambassador, would she have declined? Why must we objectify women? Why can’t that old asshole see Mya as an asset who can benefit the country?

And its pathetic because we have seen countries like South Africa engage bloggers like Joy Kendi to promote their country. So why should the dumbest assholes head the most important institutions in Kenya? 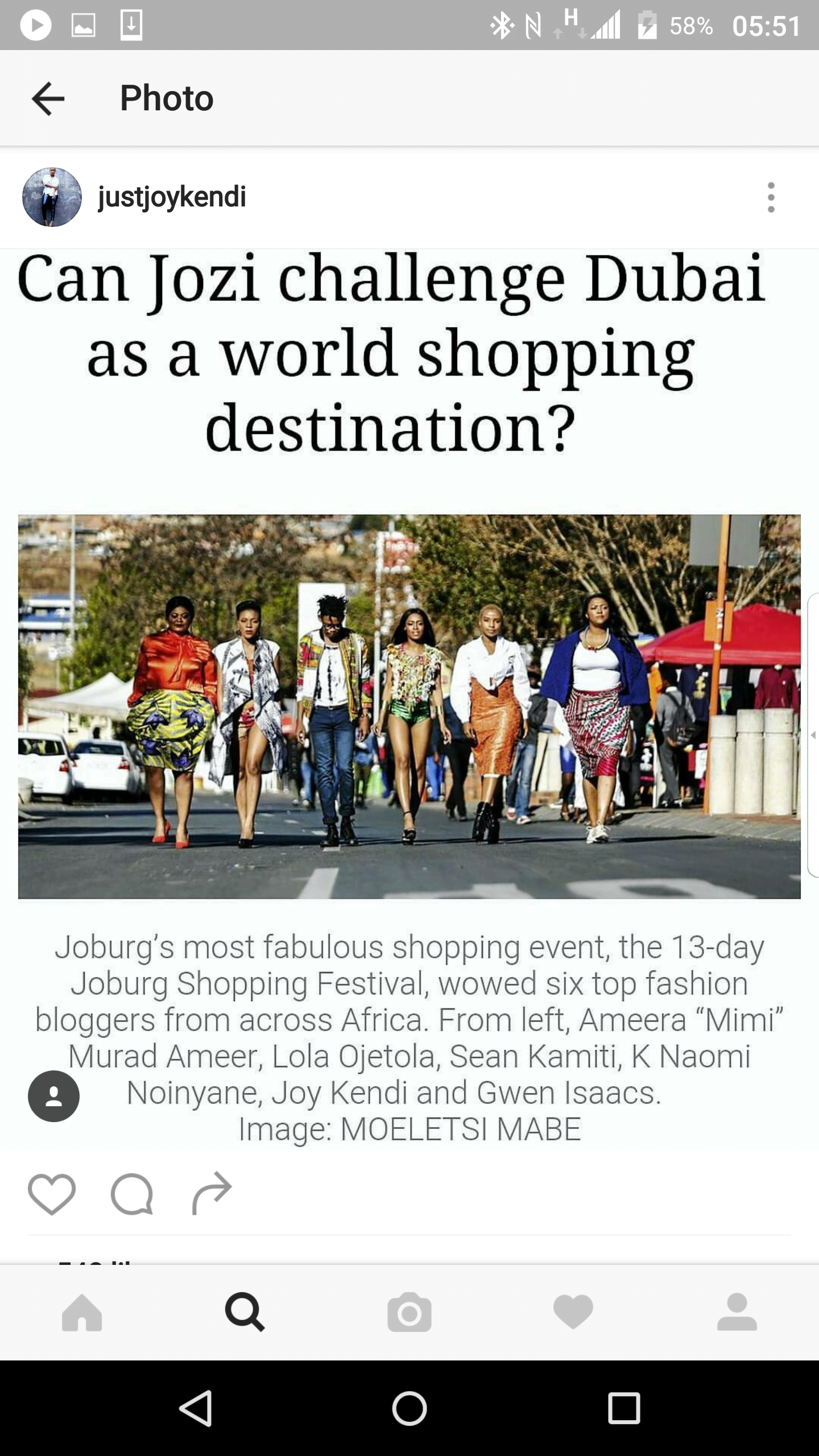 Caption: Joy Kenya as part of influencers marketing South Africa. Meanwhile KTB and Brand Kenya want to retain same model of marketing in tourism fairs, so that they can travel and earn par-diem at the Taxpayers expense. It’s what happens with you have a retarded fagget like Najib Balala as Tourism Cabinet Secretary.

The old assholes who are directors of Kenya Tea Development Agency (KTDA), the Tea Board of Kenya or even the makers of tea brands like Kericho Gold haven’t snapped the opportunity to have the beautiful Mya endorse Kenyan tea and be an ambassador of our tea in the United States. Remember that Diageo, drafted hip-hop legend P-Diddy as an ambassador of their brand Ciroc Vodka, a partnership that drove up the sales of the drink even globally.

It all boils down to the media, the Kenyan set-up and the institutional stupidity that has been entrenched in Kenya by the 8-4-4 education system which was a brainchild of the retarded former President of Kenya Daniel Toroitich arap Moi. People are genuinely dumb in Kenya, and they make no effort to hide that fact. And it also seems that the system is wired to block those who have some brains and can help elevate the country to the next level.

This is the reason why you will see the biggest advertising agency Scanad releasing the most pathetic advertisements, because employment in that public company isn’t based on merit but on who is having sex with the bosses.

Why are corporates continuing to give huge contracts to these shit advertising agencies who don’t even sponsor events and concerts but instead choke our airwaves with shit adverts? Can’t corporates read the signs of the times? If a small outfit like PRC can draft good artists like Mya, 112 and Ginuwine, yet East African Brewing Limited (EABL) isn’t interested to bring us Jay Z or Kanye West simply because the brand managers or CEO wants a bribe, then they’re clearly going to find themselves stranded in the boulevard of mediocrity like mainstream media.

Expounding on the same, mainstream media still hasn’t caught the drift on how Kenyans have started disassociation with them. For instance, concert/event promoters are utilising social media 100% to hype and sell their events. Nobody is using mainstream media to hype their event. And this is only the beginning. Going by the precedent set with the advent of for instance mobile money, which almost crippled the banking sector, or a online betting which is the craze in Kenya, media will become totally irrelevant once smartphones become cheap and accessible to rural Kenyans.

Your stupidity of hiring third-rate journalists from mediocre religious-based institutions of “higher” learning, who can’t even conduct interviews from a global perspective, will be the end of your media houses dear media owners.

I was just about to sign-off then I remembered the town-hall meeting Obama hosted at Kasarani stadium, during his visit to Kenya last year. In the meeting, the “best” brains in Kenya had been selected by the US Ambassador to engage the visiting head of state. Instead of engaging him on matters of geo-political importance which would be a once in a lifetime to pin him down on his foreign policy, the idiots went to solicit for donor funding to support their struggling NGO’s. A real moronic bunch of so-called “activists” whose stupidity is infinite. 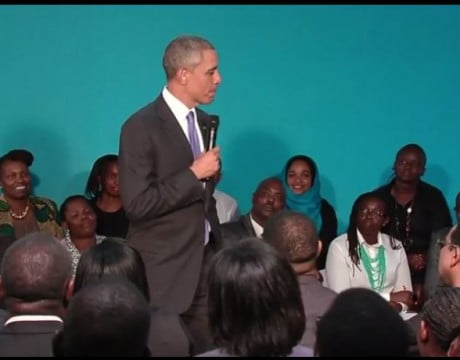 Caption: President Barrack Obama with a collection of kenya’s “top” brains as selected by the US Ambassador. Many were there to solicit for funds for their struggling NGO outfits and gave a horrible representation of Kenya.

This is the sad state-of-affairs in Kenya. We celebrate mediocrity and are even afraid to call it out. Such a shame!
Would you like to get published on this Popular Blog? You can now email Cyprian Nyakundi any breaking news, Exposes, story ideas, human interest articles or interesting videos on: [email protected] Videos and pictures can be sent to +254 710 280 973 on WhatsApp, Signal and Telegram.