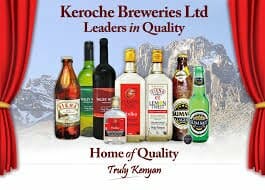 ON THE SUSPICIOUS AND MALICIOUS TARGETTING OF ITS OPERATIONS

First, we would like to commend His Excellency President Uhuru Kenyatta for authorizing the crackdown on illicit brews that are killing our sons, fathers, husbands and grandsons. We agree that these illicit brews must be destroyed completely due to their highly destructive and fatal nature.

But the truth is, the manufacturing of illicit brews did not start yesterday. This problem has been with us for decades and the illegal brewing dens are well known by the county administration officials and law enforcement officers. The manufacturers of illicit brews are well known and hence the crackdown being led by local MPs and leaders should have been conducted lawfully.

Unfortunately, what we have seen is massive destruction of legitimate businesses, properties and the livelihood for hundreds of Kenyans. We have also seen a disturbing trend where the efforts of local entrepreneurs are being destroyed and sacrificed with malicious intent. The experience we are undergoing today reminds us of the 2003 raids when Keroche Breweries was maliciously targeted by Government in a bid to close down its operations.

Yesterday, the Naivasha MP, Hon. John Kihagi, whom we respect highly as our local representative, held a high level cordial meeting with our directors at our brewery in Naivasha. We even took him on a tour of the entire brewery after which he certified that Keroche products were brewed under the highest quality standards and gave us a clean bill of health.

But to our huge surprise, this morning we heard Hon. Kihagi claiming on a national and popular vernacular radio station that he was not allowed into our premises! Why would he go on radio and do this?

Why is he deliberately confusing Kenyans and the market? Is he acting under somebody’s directive? Is he out to tarnish the reputation of Keroche Breweries and destroy the business?

What is his motive? We are highly convinced that he is under the influence of our competitors. What professional manufacturing or engineering credentials does he have that enables him to distinctly distinguish between first and second generation brews? What is the formula being used?

Hon. Kihagi has no moral right to go on national radio and discredit legitimate, law-abiding organizations like Keroche Breweries.

Courtesy of his reckless statements on media, Hon. Kihagi is threatening the livelihoods of thousands of Kenyans who include our staff, distributors and suppliers. He is also threatening the investment of banks and the Kenya Revenue Authority whose revenue is held within the stamps equal to Kshs. 1 Billion annual tax revenue. Who will reimburse our investment? Who will pay the Government tax? Will the Government pay back our loan?

We should loudly and boldly say ‘No’ when an area MP threatens a legitimate, multi-billion investment that has received the endorsement of Government, banks, businessmen and women and Kenyans in general.

ON THE SUSPICIOUS AND MALICIOUS TARGETTING OF ITS OPERATIONS

After investing heavily in manufacturing and providing a livelihood to hundreds of our own Kenyans, why is Keroche Breweries, a company that was built from scratch and single-handedly by the efforts of a local woman from Naivasha who has consistently ploughed back all her proceeds into the company for the last 18 years being targeted?

Keroche Breweries has been on the forefront of fighting illicit brews. For the past 18 years, Keroche Breweries has built strong alcoholic brands that cater for the needs of all Kenyans across the economic divide. All our brands have been certified by the Kenya Bureau of Standards (KEBS) as quality products brewed under the highest standards. If our products had quality issues, then our staff should have been the first to be affected. In fact, the demand for all our brands by Kenyans was so high that we decided to expand our brewery with huge financial backing.

Keroche Breweries has been operating in a market that has been dominated for decades by wazungus and Asians. Many did not even imagine that Keroche Breweries would be where we are today. We have fought the battles and come out stronger, thanks to the support of Kenyans. And I want to thank all Kenyans for believing in us and our dream.

Recently, KEBS published a list of suspended brands. To our utter shock, we discovered that our Crescent brand range of spirits was one of those listed as second generation. How is this possible? Yet the same KEBS has continuously certified our products as quality products for the last 18 years.

We find curious is that none of the brands produced in the exact same way as our Crescent brands by our competitors who have dominated the industry for decades and enjoy the patronage of foreign investors, meaning wazungus, were not on the same list of second generation brews.

Are we embarrassed of ourselves and of being Kenyan entrepreneurs? Does it mean I must have white skin so as not to go through this sort of discrimination in my own country?

Why is it that these companies owned by wazungus are not suffering the same fate?

Who are we supposed to believe when the same Kenya Bureau of Standards first clears and approves a brand, then bans it the next day? Why the constant shifting of goal posts? Who do they serve? Do they really serve Kenyans or foreign masters?

From the assurance of such bodies as KEBS, we went out and sourced for financing from banks to expand our businesses to ensure a steady supply of quality Keroche products to all Kenyans. What are we expected to do now when we see notices from the same KEBS that has endorsed our products over the last 18 years? Is there a malicious intent to harm our businesses and those of hundreds of Kenyans who depend on Keroche Breweries for their livelihood.

Millions of Kenyans have listened, watched and are inspired by the Keroche story. Is this an attempt to kill their dreams of one day standing out as proud Kenyans?

The President can no longer run away from his responsibility to protect local investment. He can no longer allow inexperienced leaders and ordinary wananchi to determine what is legally brewed or not!!

It is with great displeasure that we are compelled to condemn harshly the recent raids on legitimate local businesses under the guise of the war on illicit brews.

Our hope is that the Government can believe and support local entrepreneurship. After 50 years of Independence, we should be ashamed when Government agents apply double standards and different sets of principles between wholly owned local enterprises and those owned by wazungus and Asians.

I strongly urge His Excellency President Uhuru Kenyatta to immediately stop this discrimination against local investors and show the world that we can do better. It would be a very sad day indeed when Kenyan entrepreneurs became paralysed with fear of expansion and equating this as a threat to their lives. It is a shame, indeed, when a country can threaten a local brand that has been built steadfastly for more than ten years. Let us not allow local entrepreneurship to be killed. It is only Kenyans who can build Kenya and we must believe and support our own.

Kenyans are a proud society and are proud of being Kenyans. Let us fight against any form of mental colonization. We urge Kenyans, as always, to continue supporting Keroche Breweries.

As we await the clearance of our Crescent range of products from KEBS, we wish to assure Kenyans that all our other brands, namely the Summit Lager, Summit Malt, Viena Ice, Viena Ice Lemon Twist and Valley Wines (Chenin Blanc, Sauvignon Blanc and Pinotage) are produced with the highest quality that meet international standards. They are still in the market and are available countrywide. Kenyans should, therefore, continue enjoying their favourite Keroche brands.