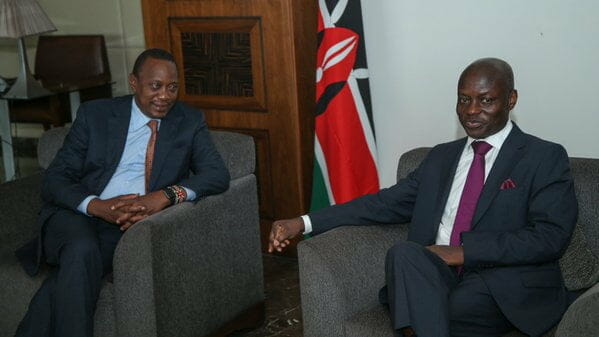 Caption: President Uhuru Kenyatta and his Guinea-Bissau counterpart Josè Màrio Vaz on this photo taken on March 7th 2016 in Ghana.

Sources from the house on the hill indicate that FKF Chairman Nick Mwendwa has managed to achieve what all anti-Jubilee bloggers haven’t, and that is to disgust President Uhuru Kenyatta.

It emerged that President Kenyatta may have placed a friendly bet together with Guinea-Bissau’s President José Mário Vaz when the two bonded during Ghana’s Presidential swearing-in ceremony.

Both Uhuru and Vaz were left stranded for 15 minutes in the scorching Accra sun, after mediocre Ghana protocol staffers cocked-up travel plans and delayed the two heads of states vehicles.

The  Guinea Bissau leader was to later call on Uhuru at his hotel suite as the two spoke about many issues, amongst them last week’s Harambee Stars Africa Cup of Nations Qualifying Match.

Uhuru has opted to keep off football affairs, preferring to leave his Deputy William Ruto who is said to have funded the young Mwendwa in-order to trounce his former YK 92 colleague Sam Nyamweya.

Led by greed and loyalties to his ghetto upbringing, Mwendwa opted to instead use the matches to reward his cronies who then made a big mess, which saw Kenya’s loss to the lowly-ranked Guinea Bissau.

Leading journalists and sports pundits now want to push for Government intervention to get rid of Mwendwa, as the country has got nothing to lose since chances of qualifying for the AFCON and WorldCup are gone up in smoke.

Nick Mwendwa was not only an embarassment to President Uhuru Kenyatta, but the country by and large.