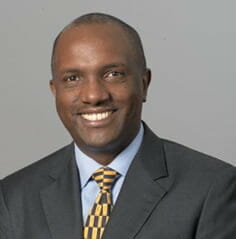 Caption: Jeremy Ngunze, is the MD of Commercial Bank of Africa (CBA) owned by the Kenyatta family and brother to the thief whose obliterated Kenya Airways Mbuvi Ngunze.

President Uhuru Kenyatta is said to be blocking the resignation of Mbuvi Ngunze, despite endorsement from key shareholders.

Mbuvi Ngunze is the brother of Jeremy Ngunze, who is the CEO of Commercial Bank of Africa, the bank that is owned by the Kenyatta family.

Mbuvi is said to be taking care of “special” interests in Kenya Airways such as the fraudulent leasing of aircraft, acquired under dubious means by the then CEO Titus Naikuni, the thief from Magadi Soda Company.

With such vested interests not for the benefit of all shareholders but only a few people, Kenya Airways is surely headed down the drain, taking down with it small shareholders and suppliers with them.

Kenya Airways will also go down with the hopes and aspirations of the many workers who have come to call it home, together with the many dependants it supports.

Kenya Airline Pilots Association (KALPA) had the upper hand yesterday, as they had the Government in a corner and only needed one extra day to achieve everything they needed, including Mbuvi Ngunze and the entire board’s resignation.

KALPA seems to have bowed to pressure, oblivious to the fact that Mbuvi’s continued stay at the national carrier will result into a witch-hunt of instigators of the strike. The young clowns at KALPA don’t seem to be very strategic.

Pilots are not yet privy to the return-to-work formula and moreso the fact that there seems to be political interference in Mbuvi Ngunze’s resignation, where Uhuru wants him to stay in office.

The question remains, why can’t Uhuru employ him at Brookside?