The ministry spokesman said that “the space intelligence images showed that oil was actively extracted and massively exported for processing outside Syria, under the reliable protection of US troops, before and after the defeat of the Daesh* terrorists.”

Commenting on the satellite intelligence, Maj. Gen. Konashenkov said US operations in eastern Syria and its actions regarding Syrian oil could only be described as “international state banditism.” He added that Syria’s oil belongs to the Arab Republic, and not to Daesh or to “American protectors from Daesh.” 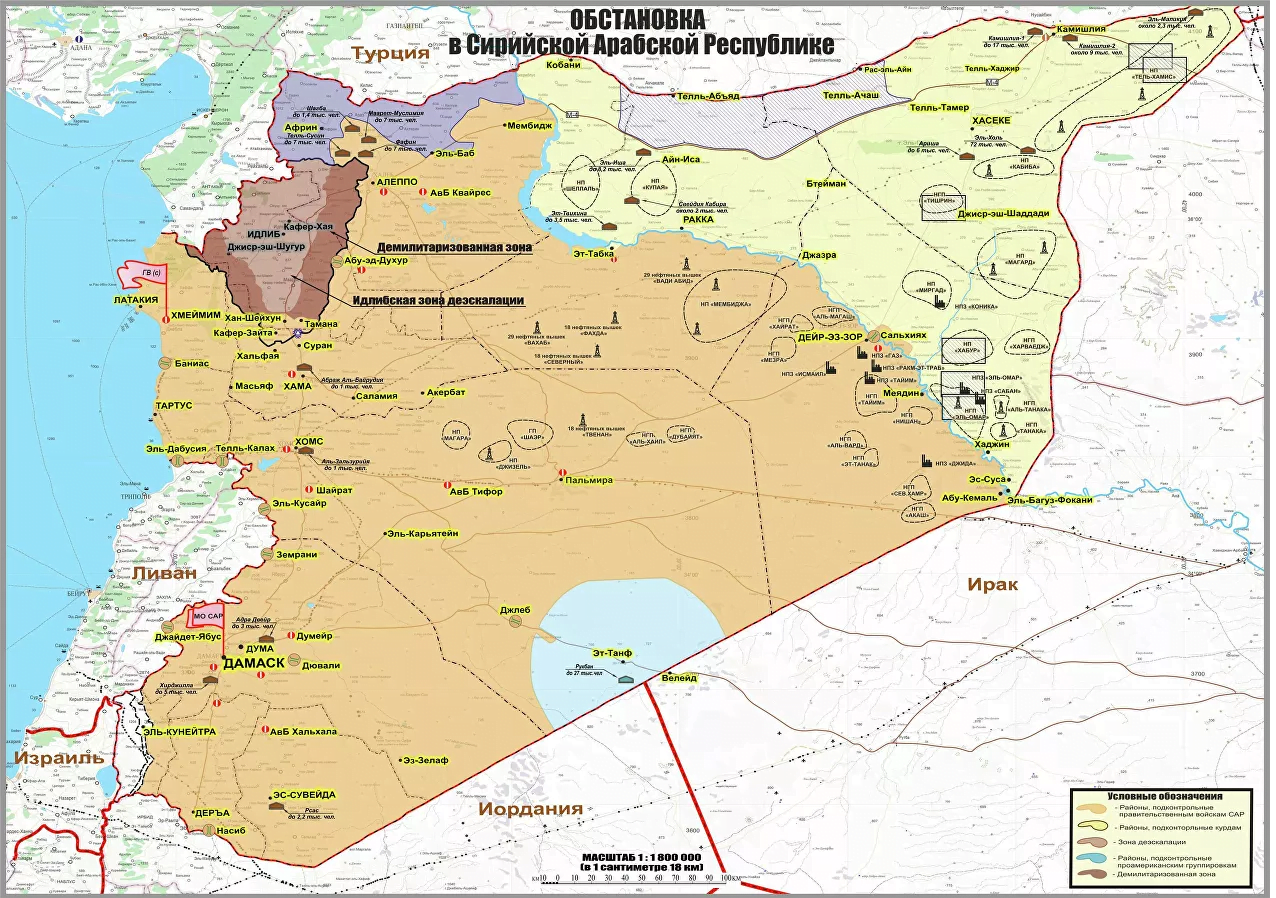 According to Russian intelligence, the illegal US-supervised extraction of Syrian oil was being carried out by “leading American corporations” and private military contractors, with US special forces and air power used for protection. Konashenkov said the estimated monthly revenue of this ‘private enterprise’ was over $30 million, and that for that kind of money, the Pentagon and the CIA would be “ready to ‘guard’ Syrian oil wells from ‘hidden Daesh cells’ indefinitely.”

The Defence Ministry spokesman pointed to several concrete examples of the scope of US-led operations. On August 23, satellites picked up a cluster of about 90 vehicles, including 23 tanker trucks, clustered at the Daman collection point, about 42 km east of Deir ez-Zor province. Then, on September 5, 25 vehicles, 22 of them fuel trucks, were spotted in Hasakah province. On September 8, 36 more vehicles, 32 of them tankers, were spotted in the vicinity of Der ez-Zor, with 41 more vehicles, 34 of them fuel trucks, spotted in the Mayadin area in Deir ez-Zor.

Konashenkov cited a US-controlled company called ‘Sadcab’ or ‘Sedcab’, created under the auspices of the local Kurdish autonomy, as exporting the oil, with the proceeds going to numbered accounts of US military contractors and intelligence services.

Pentagon chief Mark Esper said Friday that the US intended to take measures in the near future to strengthen its position in the Syrian region of Deir ez-Zor in order to prevent terrorists from accessing oil fields. According to the defense secretary, Washington is studying how to move forces in the region so as “to ensure the safety of oil fields.” 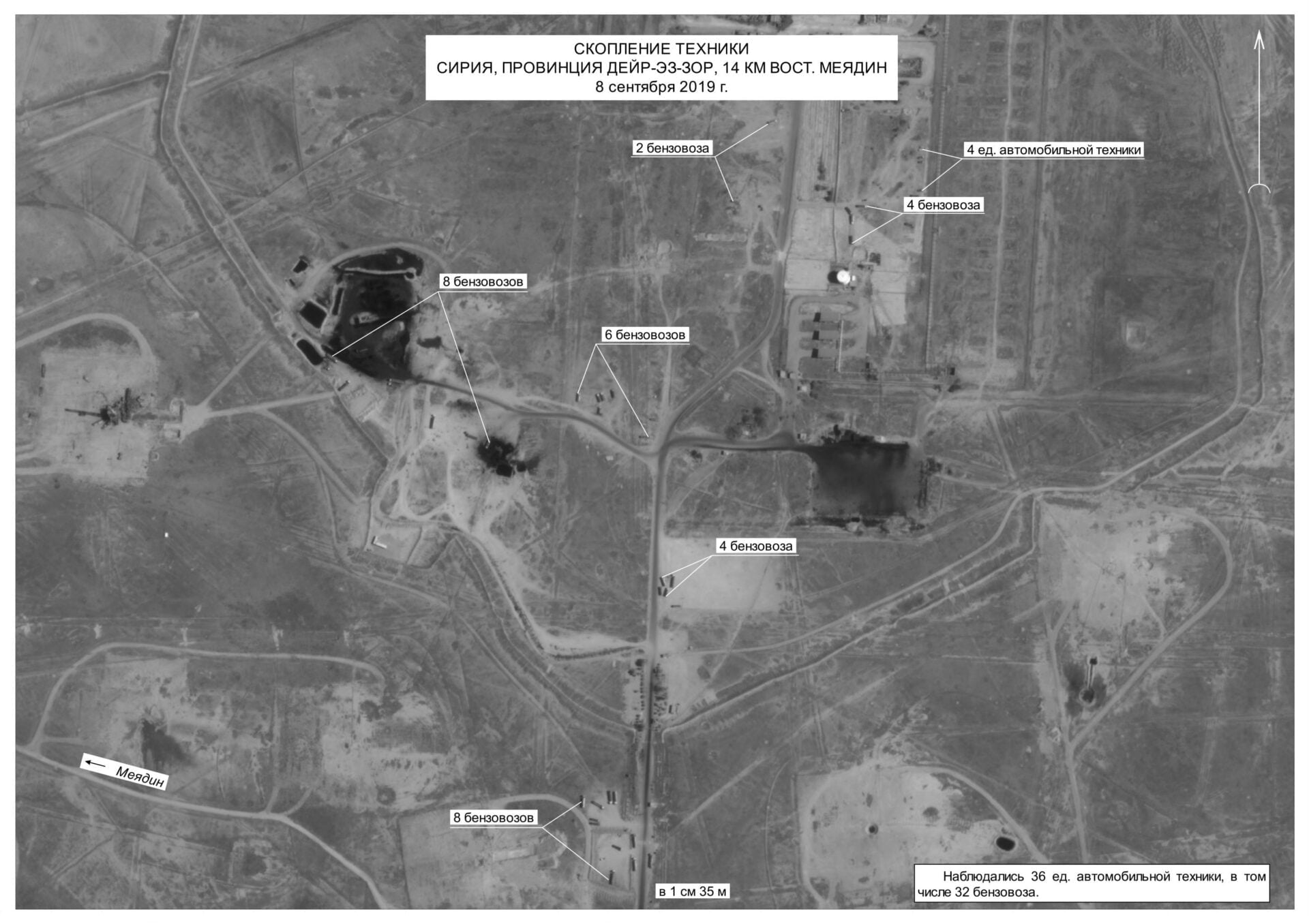 President Trump raised eyebrows in a tweet last week when he said the ceasefire between Turkey and Syrian Kurdish forces was “holding up nicely” and that the US had “secured the Oil,” without elaborating. Trump repeated his sentiment in a Friday interview, saying “we’ve secured the oil and we’ve got the oil, so that’s good.” In Saturday’s presentation, the Russian military offered insights into the scale and scope of the oil Mr. Trump appeared to be talking about.

“The ceasefire is holding up very nicely. There are some minor skirmishes that have ended quickly. New areas being resettled with Kurds. U.S. soldiers are not in combat or ceasefire zone. We have secured the Oil.” Mark Esper, Secretary of Defense. Ending endless wars!

Washington withdrew part of its forces from northern Syria earlier this month in the face of an imminent invasion by Turkey, which launched an operation ostensibly aimed at clearing the area of Daesh and Kurdish militia forces, which Ankara also classifies as terrorists. The United States and Turkey reached a ceasefire agreement in the region last week, with Russian President Vladimir Putin and Turkish President Recep Tayyip Erdogan later meeting in the Russian city of Sochi to work out a deal to ensure the pullout of Kurdish forces from the border area with Turkey in exchange for a halt in Turkish operations and the establishment of joint security patrols in the operation zone. The Syrian Army also began deploying into areas formerly controlled by Kurdish militias, with a number of settlements declaring their allegiance to the Syrian government due to the perceived inability of the Kurdish forces to protect the local population.