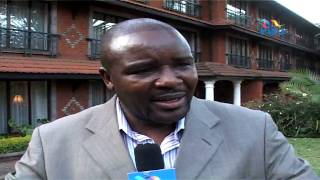 There was drama at the funeral ceremony of a senior police officer in Kakamega county when two senators clashed sharply with a political activist over the fate of Mumias Sugar Company and corruption allegations levelled against Devolution and Planning cabinet secretary Anne Waiguru.
Businessman Stanley Livondo engaged in a bitter exchange of words with senators Bonnie Khalwale of Kakamega and Moses Wetang’ula of Bungoma over the cause of Mumias Sugar’s near-collapse and its current revival programme.
Wetang’ula echoed the sentiments and dismissed the Jubilee administration’s bail-out programme for the miller saying it was “shrouded in mystery and lies”.
“They lied to us that they were giving Mumias Sugar grants towards its bailout. However, we have since learnt that it was a loan which will be passed on to the farmer,” he said.
The senators also continued with demands for the sacking of Waiguru whom they said was aware of the goings-on at the National Youth Service.
However, Livondo who was seated among the mourners, went for the microphone immediately after the duo had spoken and rubbished all their claims, dismissing them as malicious and hogwash.
He accused Khalwale and Wetang’ula of insincerity and hypocrisy in their latest onslaught against Kidero.
“My brother Khalwale was chairman of the public accounts committee while Wetang’ula was a minister when Kidero was at Mumias Sugar Company. We want them to tell us what they ever did to stop the alleged looting that they claim was taking place at the sugar miller,” he said amid cheers from the mourners.
Livondo further said only recently, the duo flanked Kidero just after he had won an election petition. “These people are not honest with you farmers. They are not doing whatever they are doing for the benefit of the farmers, workers and other people who rely on Mumias Sugar. We know that they are making this noise against the Nairobi governor so as to extort from him. They are in business,” he said as the senators looked on in astonishment.
The businessman, who is said to be eyeing the Kakamega senator’s seat in the next elections, said instead of concentrating on fighting Kidero, they should enlist him to help them understand how he steered the sugar miller for the over nine years he was at the helm.
He accused Khalwale and several other leaders from Kakamega county of contributing towards the problems facing the miller after they incited farmers to uproot cane thus affecting supply to the factory.
“I vied in Lang’ata in 2007 and my vision was to see Kibera the way it is today. But it is shocking that the opposition is now inciting people to burn latrines and health facilities put up by the NYS in collaboration with the area youth. Is this the kind of government Kenyans want?” he posed.
He dismissed Khalwale and Wetang’ula’s assertion that Cord would clinch power in 2017 saying the government was even winning more support ahead of the polls due to its robust development programmes across the country, including in opposition zones.
The leaders clashed during the burial of the former head of Anti-Terror Police Unit Isaac Katola at his home in Navakholo. Also present was area MP Emmanuel Wangwe.