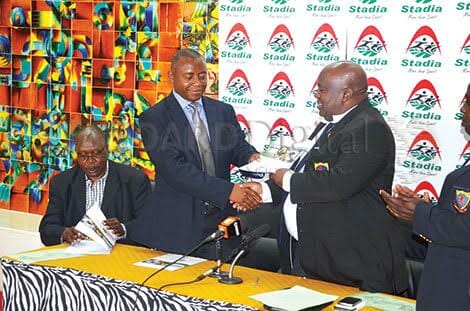 Photo Caption: Far left, Wilberforce Chebet, head of tender committee at Sports Kenya and next to him Gabriel Komora, CEO of Sports Kenya at a past event. Komora is hell-bent on ensuring that a consortium of his liking wins a recently-advertised bid.
After details of corruption in a tendering process regarding the formation of a Special Purpose Vehicle to oversee the Magic Cup 2016 Tournament and host the best European teams, Sports Kenya Chairman Fred Muteti summoned senior Sports Kenya managers for a crisis meeting.

The meeting came amidst continued scrutiny of Sports Kenya activities by Statehouse operatives, who seemed to have been caught off-guard as the scandal changed form, and more revelations and high-level graft were released.

The main agenda of yesterday’s meeting was to formulate a strategy to eliminate the board from taking over the matter and to ensure that only favored bidders connected to a section of the Jubilee Coalition, emerged victoriously.

It was agreed that the timelines be altered, and a decision on the winner of the bid be extended by an extra month or two, to allow Fred Muteti and Gabriel Komora time to consult with a higher office, and figure out a strategy to have the partners win, without arousing the suspicion of the independent board.

According to the proposed timelines, contracts with partners and teams were supposed to be signed this month (August) and announced next month. But Fred Muteti wants an extra two months to “re-evaluate” the tenders, buy time and keep the board distracted, preferably with an international trip, so that the decision can be made in their absence.

The Sports Kenya Board comprises of a multi-sectoral panel, all of whom are established individuals in their fields of expertise. Many are wealthy and beyond reproach. In fact, Fred Muteti, their chairman, is ironically the most broke of them all, a situation largely attributed to his involvement with politics.

They know very well that they will bear the brunt of any reckless activities by the management, and will be answerable to the law now or in the future when institutions to fight corruption are resurrected. For Muteti, this appointment means an opportunity to enrich himself, while the rest of the board members do not require the handouts from Sports Kenya. They are simply doing their jobs.

Fred Muteti and officers from the second highest office in the land were busy consulting on the phone on strategies to isolate the board, extend the decision and have their preferred companies win the tender. Largely in part because one of the parties had already parted with a tidy sum of money, in-form of a bribe for senior Government officials.

The acting CEO Gabriel Komora is particularly playing a high-risk game which will cost both his job, career, and benefits. He has been warned severally, but he continues to be stubborn and openly associating with vested interests in the matter, many with photographic evidence.
Will Fred Muteti have his way to isolate the Sports Kenya board, postpone the timelines of the Special Purpose Vehicle tender, and finally, enable his preferred consortium to win the tender for his personal gain?

Keep it here for more details.