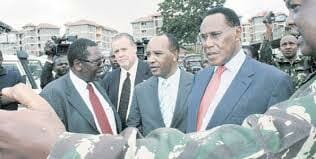 From humble beginnings, Kirigua passes off as a very ambitious and aggressive man. He established Pewin Group and has positioned the brand as the foremost vehicle dealer and taxi company in Nairobi.

New in this violent world of football politics, Kirigua blindly followed his tribesmate Kenneth Mathiu into bidding for a tender which he has no prerequisite knowledge of, and neither does he understand the dynamics behind the industry. His consortium partners are simply misusing him for money, and connections with Government officials.
But unlike other industries, football is tough and unforgiving. You need to have thick skin to survive. Unlike in Government where UhuRuto and Co., make away with 67B and nobody complains, stealing 1million in football can give you sleepless nights.

Already, an associate of Peter Kirigua confided in us that these reports have aggravated him to the extent that he is now under medication for high blood pressure-related complications.

Government officials starting with Deputy President William Ruto and Tourism Cabinet Secretary Phyllis Kandie have started distancing themselves from this scandal, even though they know very well that they were part of the deal.

William Ruto is nothing but a work of art. They don’t make his type anymore. He’s the master of double-speak and has perfected the skill of saying one thing, and doing the exact opposite. He can cry while kneeling in church and heartlessly steal the days offerings from the same church, with no qualms at all. A man with no heart. A walking carcass.

He went round the country articulating Jubilee’s agenda for the youth as regards to sports and arts. Now, Ruto is the same man, meeting conmen like Kenneth Mathiu at night, and ensuring that projects which are a negligible investment but with immense positive impact for the youth, never see the light of day. The little that’s been allocated by the youth is being encroached on by the same old forces that have wrecked this country. What a shame!

And with a straight face, Ruto will address the same youth, mock their misery and poverty with his stage theatrics, speech delivery, and cunning words. Worst of all, he will get away with it.

In the end, Peter Kirigua will be left alone, as Government officials are renowned for saving their skins and jumping ship whenever it’s convenient for them or when the heat is around the corner. We know of many examples, dating back to the days of powerful Indian businessmen like Kamlesh Pattni and Ketan Somaia, who fell from favor and prisons became their second homes.

And while Peter Kirigua claims to be a born-again Christian, his actions betray him. You would have expected that by now, following the bad publicity and PR that his family-business has endured, his handlers would have advised him to exit the situation already and withdraw from the tender.

But staying true to form, Kirigua claims to be battle-hardened and has vowed to ensure that he will fight and emerge victorious, even when the odds are against him.

We will also be unrelenting in our quest to expose shoddy underhand tactics by Government officials and private companies to loot taxpayer monies.