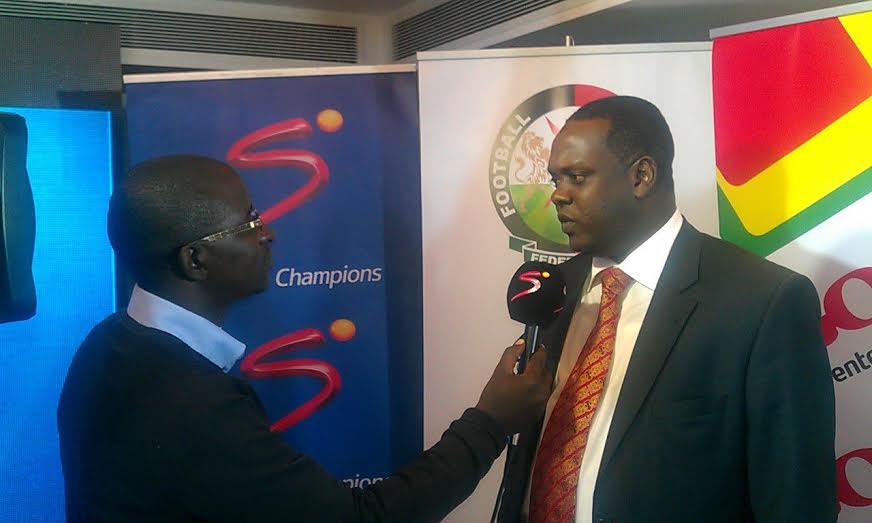 Photo Caption: Sports Cabinet Secretary Hassan Wario Arero being interviewed by Supersport International. ‎He has threatened to disband the entire Sports Kenya, if they fail to tame the greed by senior managers.

Cabinet Secretary, Ministry of Sports, Culture and Arts Hassan Wario Arero is now turning the heat on the Sports Kenya board, as he seeks to distance himself from affiliation with OpenSide Sports UK, which was paid Kshs. 50 Million in 2013 to secure the signature of Arsenal, a project that turned out to be a fraud.

“The board should have been on top of this matter, overseeing a credible tendering process, evaluated all bidders based on merit, and acted accordingly as regards to the Sports Act,” Wario confided in one of his officials.

Sports Kenya recently advertised in the press, for interested firms to submit their Expression of Interest (EOI) in overseeing the Magic Cup Tournament, but the matter seemed like a staged procedure aimed at ensuring that a politically-connected consortium won the bid.

The bid also includes individuals linked to OpenSide Sports UK, that was previously awarded the tender which expended a lot of taxpayers money, and they did not deliver. The letters purportedly presented to the then Sports Stadia Management Board were forgeries.

Wario, who has since changed tune after the scandal blew up, today threatened to disband the entire Sports Kenya board, and dismiss without benefits the three senior Sports Kenya officials (Komora, Githaiga, Chebet) should they not carry out the recent tendering process in a transparent and accountable manner. Wilberforce Chebet and Francis Githaiga are due to retire after reaching the mandatory retirement age, while Gabriel Komora’s position is being advertised, and he will be required not to apply, because of overstaying in an acting capacity for over three and a half years.

“We do not want the Ministry subjected to negative publicity, nor do we want the Government to lose any more money. I appeal to the Sports Kenya Board to move swiftly and supervise the entire tendering and vetting process, to ensure that only qualified and certified bidders win,” Wario said.

It is still unclear what role the Football Kenya Federation (FKF) will play in the bid, but being a unique football project staged in Kenya, it would only be logical if they were involved in the tendering & vetting process.

But reports are that Sports Kenya CEO Gabriel Komora had isolated all interested parties, and was dealing directly with the Sports CS and the Deputy President. He has since gone into hiding and is not picking Phonecalls or responding to emails.