We continue to force down the fact that 8-4-4 is a flawed system created by retarded and retired President Moi to dumb-down the country and turn citizens into dysfunctional robots, who serve the ruling and corporate class as servants. Reason why on their idle time, many Kenyans prefer to discuss about other people’s wealth and achievements, instead of focussing on their own.

Secondly, religion has been interwoven within the 8-4-4 curriculum, meaning that students are forced to attend pastoral sessions. When intertwined with education, the hybrid of Moi’s stupidity demonised students that were exceptional especially in the arts. Those who could sing, act, draw, and the likes were bullied by their peers who thought that simply because they passed exams, they were the SI unit of intellect.

8-4-4 stifled all co-curricular exploits like sports, because all the free-time in schools was exploited for remedial classes in shit subjects like Mathematics, where mediocre 8-4-4 teachers derived pleasure from robbing the childhood from students. Because teachers had a miserable life while growing up themselves, they opted to extend their misery to students and denied/continued to deny them the freedom to explore the talents and gifts outside books.

Many people claim that Gospel music is popular in Kenya, but the real truth is that it’s largely Gospel musicians who are allowed to visit schools. Students who then lack an avenue to exploit their talents end up being drawn into the Gospel craze as it’s the only outside contact with a co-curricular musical activity during school sessions.

Mediocre parents are happy to concede the burden of raising their children to teachers and house-helps, so that they can live the lives their parents didn’t give them. So they drink every evening, they go out with their boys to play golf on weekends, and on Sundays spend entire days in churches and third-rate outings, not bothering to have one-on-one discussions with their children.

Recently, school fires had become a subject of national concern, where again, the mediocre teachers and even religious leaders had the nerve to blame devil-worship as the root-cause of the fires. Nobody even the Jubilee wankers was proposing the complete scrapping of 8-4-4 which is an outdated model of learning that doesn’t make Kenyans competitive globally.

For instance, visit the UNEP office in Gigiri and see that the Kenyans who work there are largely in low-grade positions. Burundians, Rwandese, etc are very marketable internationally because they’re multi-lingual plus their work-ethic and output especially in positions that require trouble-shooting, is visible.

And until the day you mediocre parents stop agreeing to every delusional proposal by these low self-esteemed teachers who want to deprive your children off their youth, by even embarking on holiday-tuition, the mediocrity will continue.

On Twitter, Chance The Rapper launched the #SoGoneChallenge where he welcomed his fans to freestyle bars using beats from Monica’s 2003 song So Gone. And to freestyle and compose lyrics that rhyme is true intellect, something that’s becoming extinct in Kenya.

I have sampled one from a lady who is rapping about love and her ex-boyfriend which is relevant on two fronts. One shows her intellect and ability to drop bars, while still look decent without showing boobs or booty. The second observation is that she is talking about a real relationship with a boyfriend her age, unlike in Kenya where the “sponsor” scourge has grown exponentially, driven by media personalities who sort of find it funny.

We recently called on employers especially those working in result-oriented firms whereby content generation is evolving everyday, to desist from employing graduates from some select universities which embodied the mantra of the 8-4-4 system in totality. 8-4-4 stifles creativity and impedes intellect, reason why we have dumbed-down masses who get Bribed to vote or are conditioned to engage in post-election violence by radio personalities.

The older generation who went through 7-4-2-3 will admit that they were a better lot of graduates than the crap that’s being churned out from these religious-based universities like Daystar. Just like radical islamism as taught in schools has enabled terrorism to thrive, so has Christianity made students who studied through it, made them one-sided and semi-retarded.

Teachers or lecturers at Daystar would for instance, find the lady in this YouTube video as committing a “sin” due to their religious conviction which gives them the illusion that Christianity is the only religion that makes Christians supreme beings over the rest. Yet the lady is exhibiting intense creativity, artistic expression and intellect. And she is doing this from her bedroom.

Today I was saddened to see someone with a degree walking around the streets with a big banner begging for employment, yet he has an accounting degree with a CPA-4. Our mediocre universities train students for employment and not necessarily incubating the next thinkers, inventors, innovators and the likes. 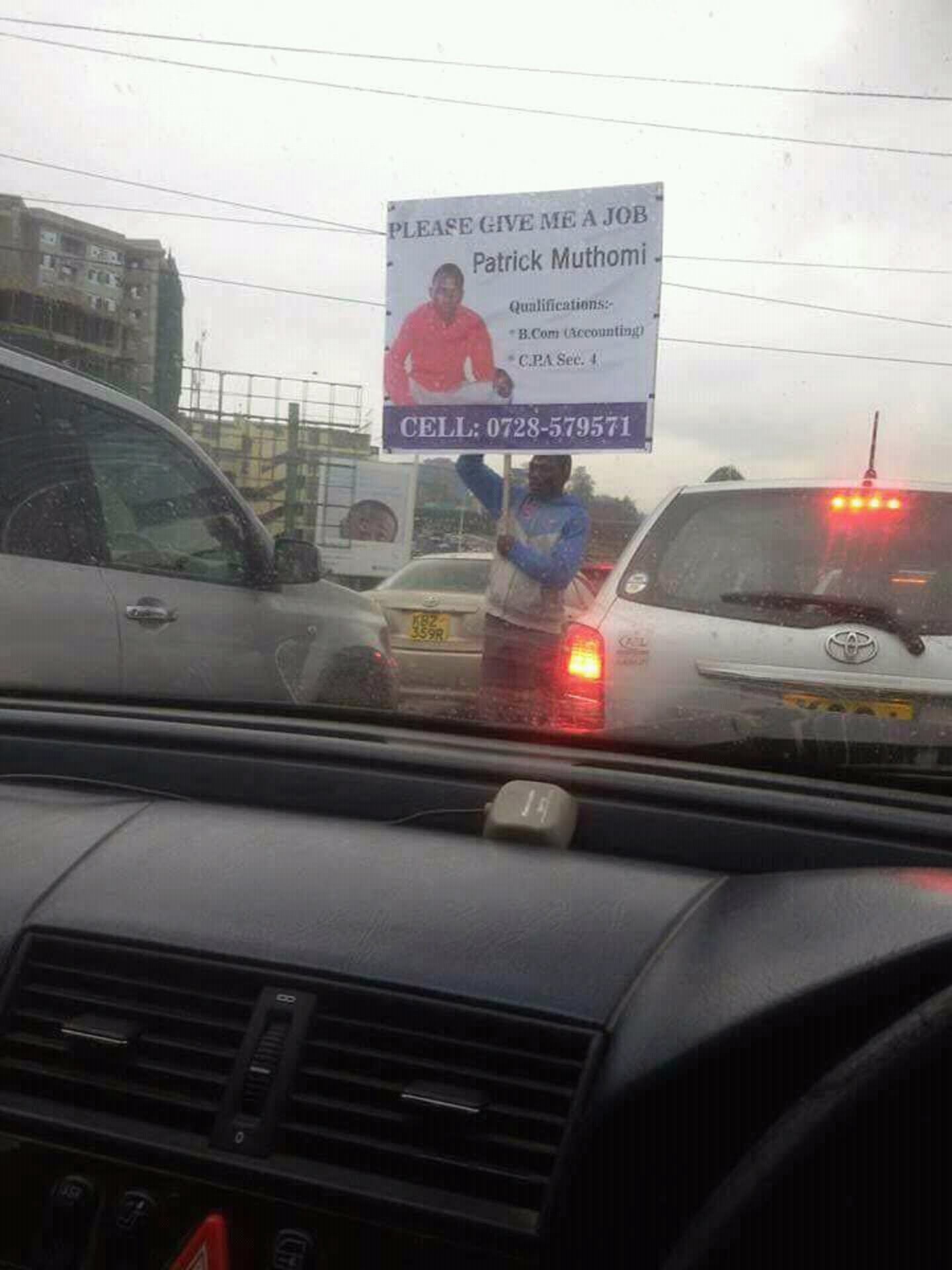 Caption : Kenyan Graduate using a Banner to beg for a Job on the Busy Thika-Super-Highway. Very sad

You can either choose to insult me, or you can atleast admit that you’re products of a flawed education system, and thus take the necessary steps to safeguard the future generations from Moi’s mediocre 8-4-4 system. Otherwise prepare for schools getting burnt every term.

Watch this video shot by a teen, and tell me if our education system can churn out such talent. It can’t!