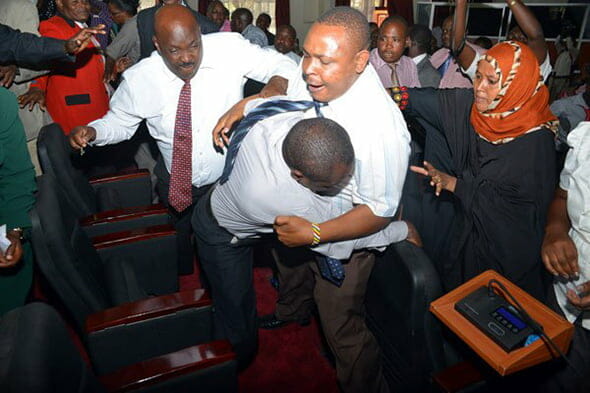 NAKURU majority leader Samuel Waithuki is a “project” for speaker Susan Kihika, an MCA has said.
Visoi MCA Gitau Kamau said Kihika is using county assembly resources to fund county representatives allied to Waithuki.
He said the Waithuki camp is buying MCAs with Sh3,000 to support him get back his post.
Kamau said the speaker should be arrested for quashing a court order from the Political Party Tribunal that reinstated George Mwaura as the leader of majority.
He said the Nakuru county assembly is divided between supporters of Mwaura and thos of Waithuki.
Mwaura and Waithuki are contesting for the leader of majority post.
“We have gone back to court to seek some intervention after the speaker failed to reinstate Mwaura as the leader and that is why the house is divided,” Kamau said.
He said the assembly speaker is fighting Mwaura as she cannot manipulate him into swindling the county assembly money.
Kamau said most MCAs supporting Waithuki are just afraid of being stripped of their positions as chairpersons of assembly committees.
He said the Mwaura camp, 32 MCAs, is on retreat in Naivasha town to strategise on how to reclaim the leader of majority seat.