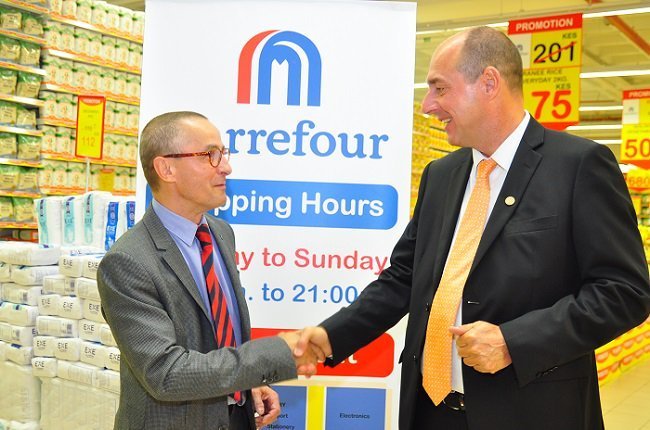 This blogs spent a better part of 2019 talking about #SlaveryInKenya. We exposed a lot of the slave-like conditions that Kenyan workers endure everyday.

Low pay, heavy work and being bypassed when foreigners are brought into the country to work in jobs that Kenyans can undertake easily, flouting the Immigration rules.

Immigration rules says in layman’s terms, ‘Foreigners should only take u jobs that Kenyans don’t have expertise in, and even though, the foreigner must train the Kenyan in the ‘expertise’ within 2 years.

We also urged Kenyans to exercise their rights to fairness and if that fails, then there is Article 37 of the Constitution which gives all Kenyans the right to peaceably and unarmed, to assemble, to demonstrate, to picket, and to present petitions to public authorities.

Kenyans must not think change comes from heaven. Kenyans must not believe that being humble and following rules will ever change anything when their rights are violated.

Below, we received this email from disgruntled Carrefour Supermarket staff.

There are some we’ve received in the past that you might want to read before you embark on the below.

Here we are again. One might even say that this might be tiring considering we keep reverting to you as a last resort regarding the ethics at carrefour Kenya, especially Two rivers branch, or should I say lack of ethics….?!

The untouchable GM, Mr Houssem Naccache… is still the subject of this email. Since our last emails to you detailing what has been going on at two rivers branch, and how local senior management has been working to sanitize him, nothing has been done to address the claims of harassment, intimidation and extended working hours for managers. If anything, this most recent claim we are about to speak to has already started eliciting subtle blowback on managers he feels were instrumental in getting the junior staff member he harassed.

Whilst on leave, Mr Houssem does not proceed on leave as is expected by all employees.its not that since he is Tunisian and can’t travel back home, he has to show up at work in civilian clothes to harass people, bulldoze people as he normally would whilst on duty. When on leave, he comes to work, just that he is not in uniform. This is important to note because, company law and policy dictates that if an employee is on leave, they should not be at their work station unless pre-authorised by their immediate boss-see excerpt from HR policies attachment 1.

Slavery At Blowplast: Abuses are Like Whips The Slavemasters Used In 1619

Already, he is breaking company rules, but since he is untouchable, nothing happens. This time, we will strive to make a difference by putting names, faces and voices to our complaint so that it all stops sounding like make-believe stories to the senior management or anybody that might want to care.

Almost on a daily basis, 2weeks on April and two weeks towards the end of May, the footage will clearly show him illegally t work while he should be on leave. On multiple occasions, he would harras staff and one day, a junior staff member had his turn. Racial slurs are claimed to have been used against him based on him being black. Note, Mr Houssem is also African, but more evolved, brighter and knowledgeable than the likes of as dark-skinned natives. The employee, one Dileck Marani Mativa. Staff number 51175053 a stocker in the light household department, complained to the Defunct and bootlicking HR department, which unfortunately in most Carrefour branches are very dull, sycophantic company stalwarts who are at the senior managements beck and call.

They are only there to maintain the Frenchmen & Arabs interests i.e senior management. The case was then forwarded to the country human capital manager, Roselyn Kweyu, staff id 51130075 who also doubles as the company Matriarch. She has installed myriad of her tribesmen into company hierarchy, at times even embedding candidates found not suitable at interview level, awarding jobs whose JD’s were in possession of other employees to her clansmen.

Roselyn also happens to be one of the most recognizable and noticeable faces in carrefour East Africa. She is on internal branding plastered in all back end offices, warehouses in every single carrefour premises in East Africa, depicting her as a champion of company values etc. The truth…., well that is subject to a lot of debate. She is, undoubtedly ”mama”. Roselyn and the Soon to retire District Manager, Mr Jean Yves Genies ( who has for a long time stifled attempts at managers claims of harassment by Houssem) had been holding a series of meetings- we liked to believe about what actions that would be taken this time, in light of the undertaking he made the last time he met with all two rivers managers to address Mr Houssem’s abrasive attitude. Unfortunately, 3 weeks later, nothing seems to have happened, Roselyn has also implored Dileck to withdraw his complaint. If this is not the case can we be furnished with statements concerning the complaint as is stipulated by company policy, which by now, all know is never followed….?

The GM, Mr Houssem has also not been idle, he has been on a self-sanitizing spree, in an effort to redeem himself in case, we think, should a time come thaT he will need the support of the local natives… eg there is talk of promised promotions with backdated salary increments. Two Sundays ago, he loaned a couple of staff, including two managers money to purchase Dr mattress mattresses.

Funny that a very abrasive Gm who is always threatening one with sanctions, warning letters (which by the way is his preferred way of ensuring managers dont get salary increments even 2 to 3 years after joining) is al of a sudden eager to help you purchase a 100k mattress that has been put on sale at 30k…? We are not fooled in the least by his cosmetic attempts at pacifying staff, we know him too well, he acts the reformed part until senior management which couldn’t be bothered in the least turns their attention to something else.

Also, he recently changed working hours for managers based on ….? We are not entirely sure that Kenyan labour laws say managers should work 11-12 hours per day, though GM, mama etc may see things differently. managers are meant to work the same 8 hours a day with one hour lunch but to avoid paying overtime, they tell you you are exempt from punching, why then, would sll staff below grade 12 be required to punch in, and receive their daily clocking reports but managers do not? As per Kenyan labour law, an employer should keep and provide records of all employees, apart from managers at carrefour of course. Ask any single manager in Kenya, carrefour cannot provide any working hour record for them, be it weekly, monthly or yearly… slave /cheap labour. Good subject for a lawsuit, this…..? See directives on working hours.

All in all, the feeling is this: it is not that the desired effect is for Mr Houssem to be terminated, not at all, we are also human. All that is asked is that he is either transferred to another store so that it is determined if the almost 300 staff at two rivers have a personal grudge against him or if it is indeed true that he may have a problem with how he relates with subordinates & people, and if it is the case, it offers an avenue for him to rectify what needs rectification. Many have not had it so easy under his Reign, so no, no one is calling for his termination, just that they now be compelled to move him elsewhere and finally see if 260+ two rivers staff are still crying wolf .And anyway with the recent resignation /retirement of almost 5general managers, we believe there are ample room and motivation for a reshuffle. It is long overdue. 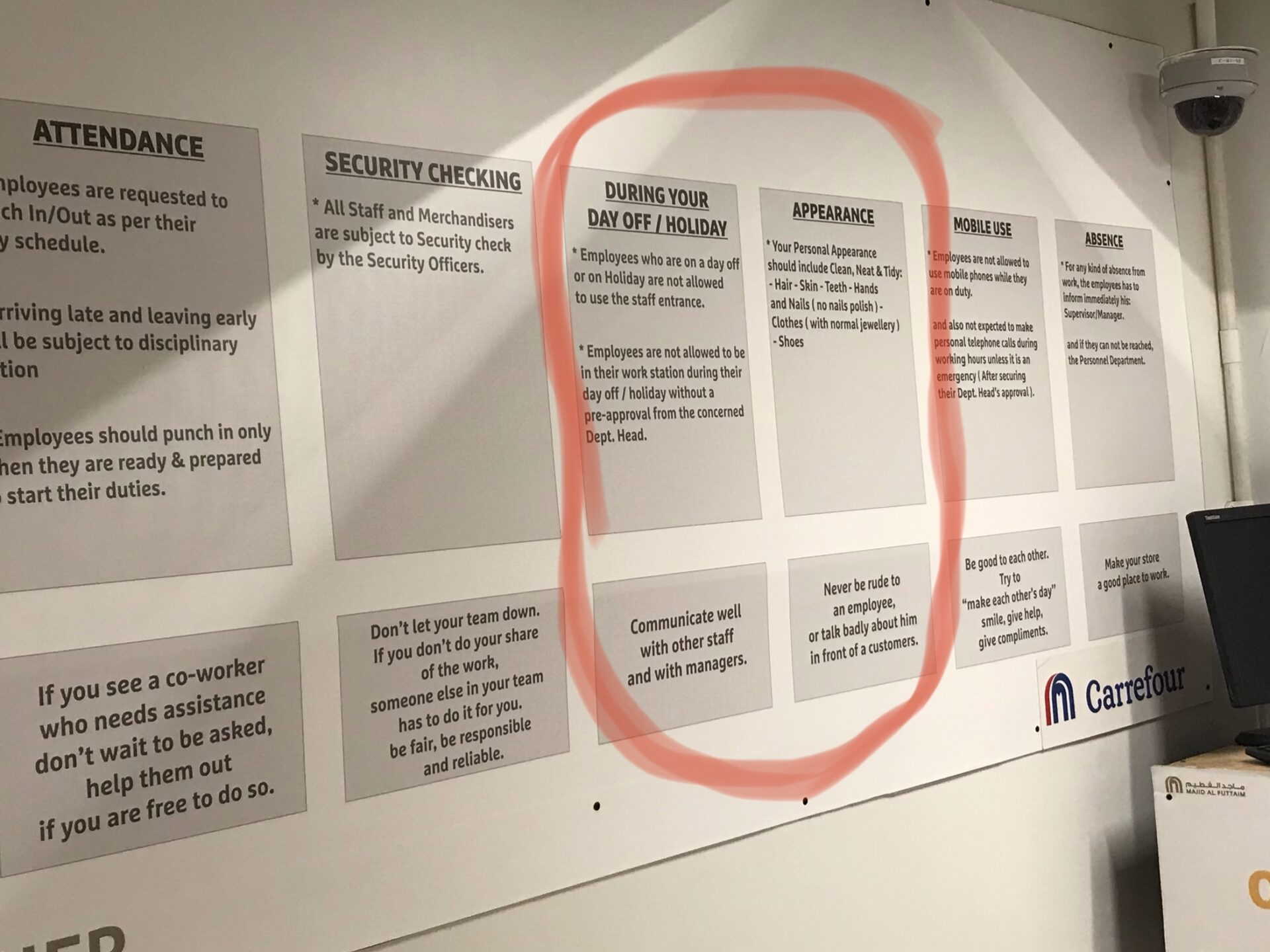 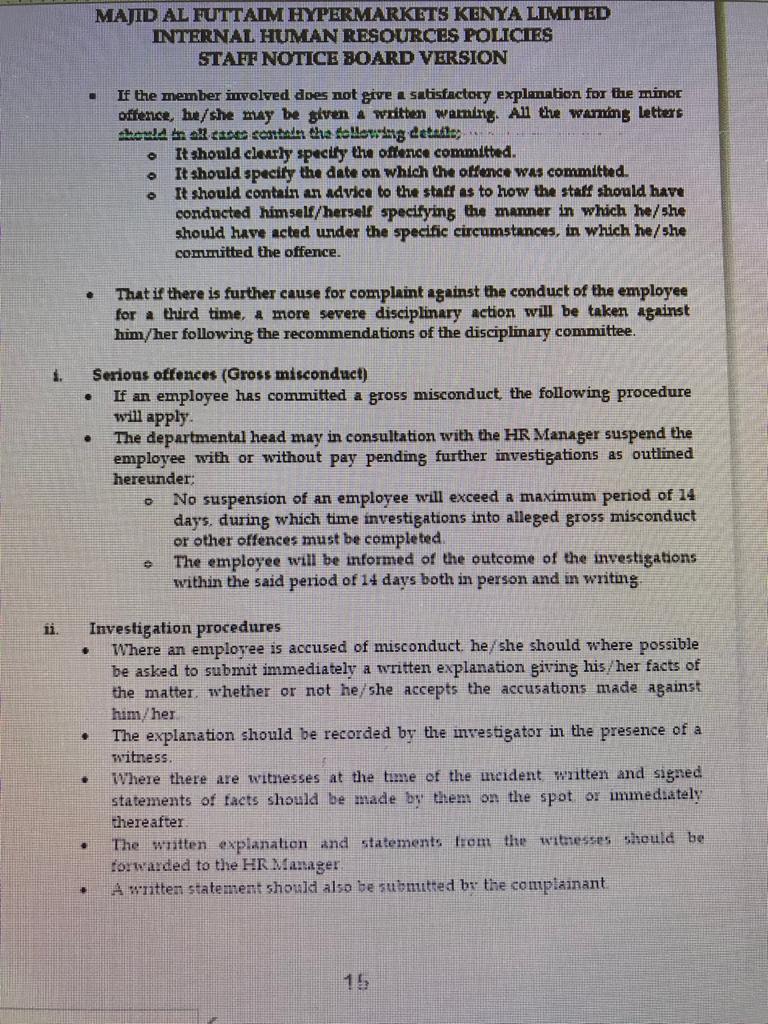 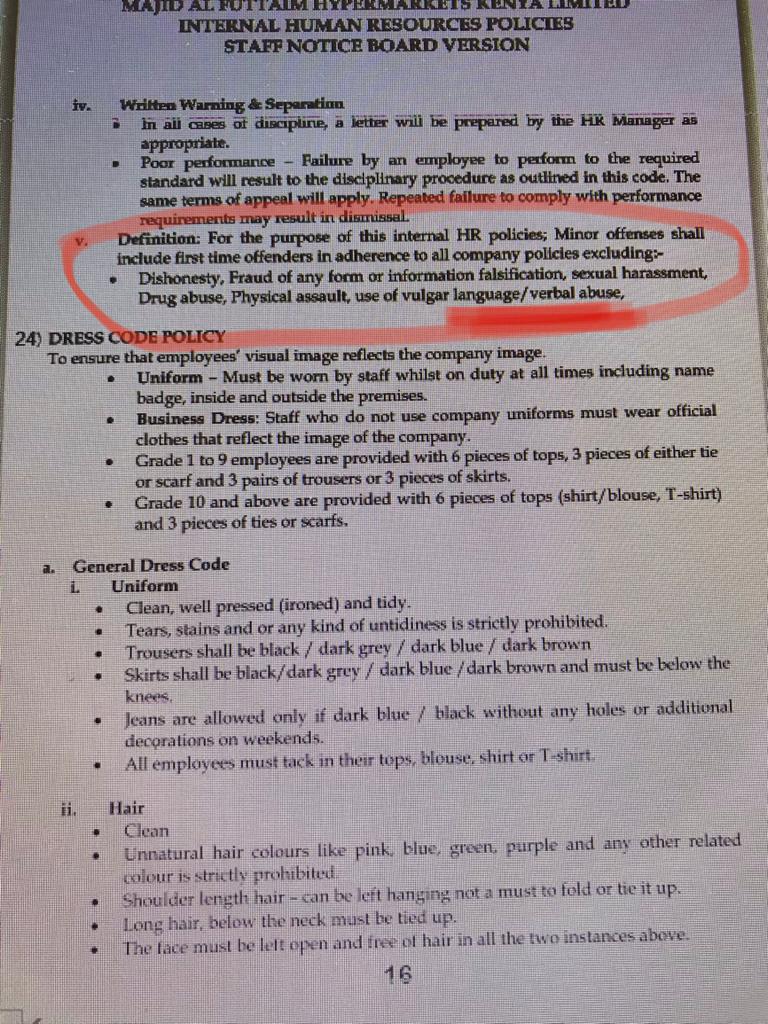 In this article:Carrefour Supermarket, Slavery At Carrefour