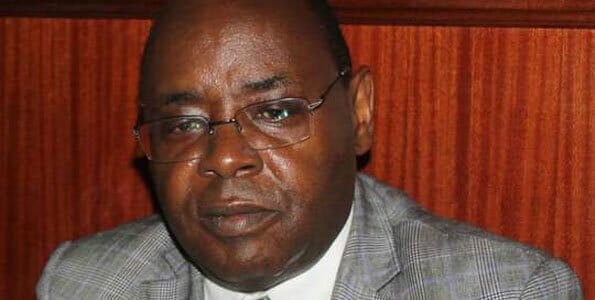 Suspended Geothermal Development Company managing director Silas Masinde Simiyu was Tuesday charged with abuse of office and hit with an Sh8 million cash bail — the highest ever granted to an accused person by a Kenyan court.

The nine are accused of illegally awarding a Sh42.7 million Rig Move services tender to Bonfide Clearing and Forwarding Limited.

The accused caused controversy after they refused to take a hearing date in protest at the chief magistrate Kennedy Bidali’s decision to grant them cash bail of between Sh5 million and Sh8 million each.

Mr Bidali, who doubles as the judiciary ombudsperson, had granted Mr Simiyu and Ms Saisi Sh8 million cash bail while the others got Sh5 million.

Their lawyers Kioko Kilukumi and Wilfred Nyamu argued that the higher cash bail was ridiculous and out of tune with what had been granted to people facing even more serious charges.

“It is not possible for the accused to pay that money, we are not ready and will not take any hearing date since this is the first time we are hearing a bail term of Sh8 million in an anti-corruption case,” said Mr Kilukumi.

Mr Nyamu submitted that even those facing murder charges get released on as little as Sh500,000, and that the cash bail amounted to condemning the accused persons to staying in remand until the trial is concluded.

The lawyers argued the maximum fine the accused could get if found guilty is Sh1 million, meaning the cash bail was eight times the penalty for convicted persons.

“If they had pleaded guilty, they would have not been fined more than Sh1 million. The cash bail is like punishing them eight times. We feel that there is conspiracy to defeat justice and unfairly treat the accused,” said Mr Nyamu.

Mr Bidali, however, stood his ground. He also refused to allow the accused to be detained at the Ethics and Anti-Corruption Commission (EACC) cells, ordering that they be remanded at Nairobi’s Industrial Area prison until they raise the cash bail.

“The application to be held at the EACC cells is disallowed. I will also not review the cash bail and if they feel aggrieved, they can move to a higher court to appeal or make an application for review before the trial court,” said Mr Bidali.

He went ahead to impose a mention date of November 30 while the accused’s lawyers said they will be filing an application at the High Court to review the bail terms.

The accused face a total of seven counts. In count one, Mr Weke, Mr Saat, Mr Omenda, Mr Mwanogo, Ms Saisi, Mr Mbaya and Mr Linyuru are alleged to have failed to comply with procurement laws in awarding the Sh42.7 million tender.

“On August 29, 2012 at GDC headquarters at Taj Towers in Nairobi, being members of the GDC tender committee, the accused failed to comply with laws relating to procurement by confirming an award of Sh42,746,000 to Bonfide Clearing and Forwarding Ltd for rig move services,” says the prosecution.

In the second count, Mr Saat, Mr Mwanogo, Mr Linyuri, Mr Simiyu and Mr Mbevi are alleged to have inappropriately influenced the tender committee’s evaluation of the contract.

Ms Saisi faces separate charges of abuse of office and failing to ensure proper management of public funds in executing the contract.

“Being the company secretary and whose functions concerned corporate governance, you used your office to improperly confer a benefit to Bonfide Clearing and Forwarding Company totalling Sh42.7 million, which was in excess of prevailing market prices,” says the prosecution.