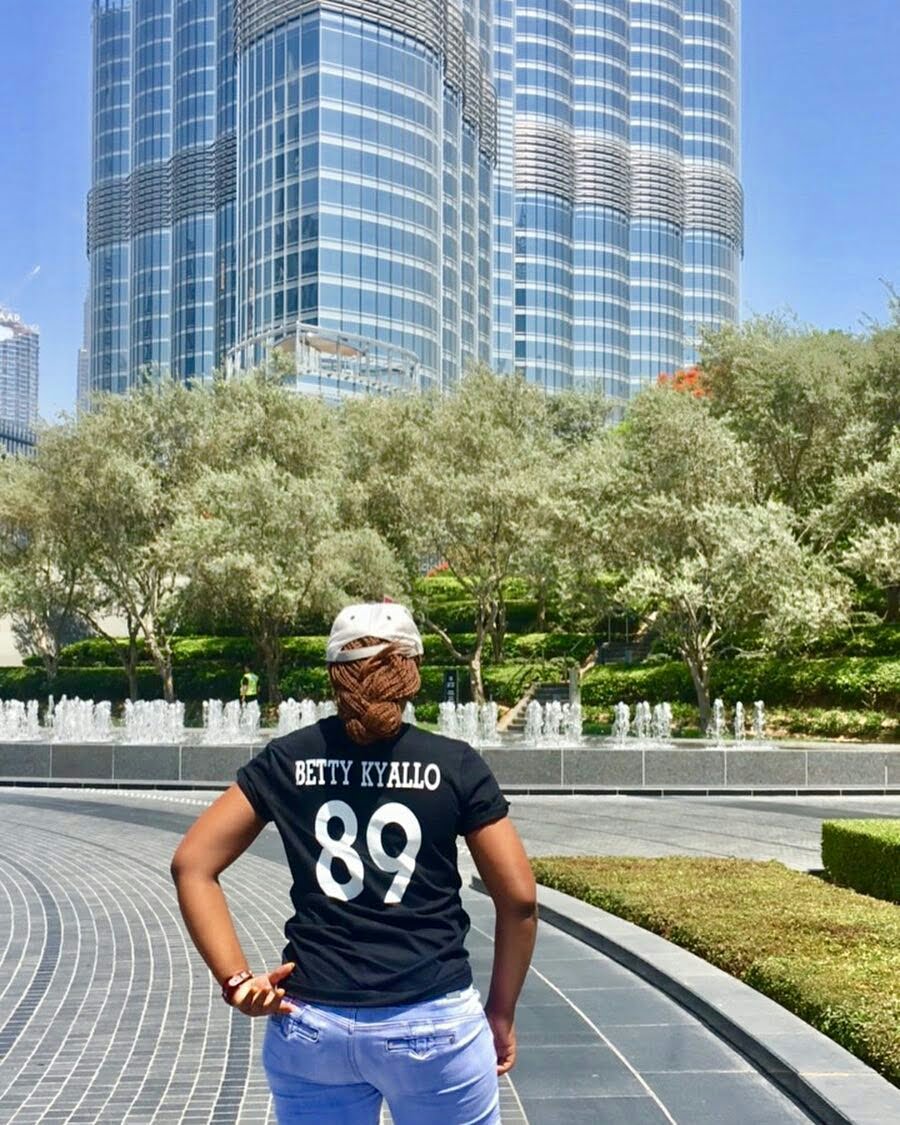 CAPTION: Betty Kyalo in Dubai. We want Kenyan women to stop hiding their sponsors. And sponsors should stop being reduced to the role of photographing your side-bitches during trips.

This is a kind and passionate appeal to women. We have all sort-of deduced that the nice photos and videos you post on Instagram, are actually fully paid-junkets from your benefactors, primarily married older men.

And we are not judging you for your indiscretions. That’s your life, do you. We only request that you stop hiding your blessers, so that men can see you for who you are. Normally Kenyan women who have slept with the highest number of men the most, normally regain a new-found chastity after age-30, posturing as virgins, yet their reproductive organs have been rendered kaput after wasting their youth years selling it to older men.

These are the women we are trying to save our brothers from marrying. 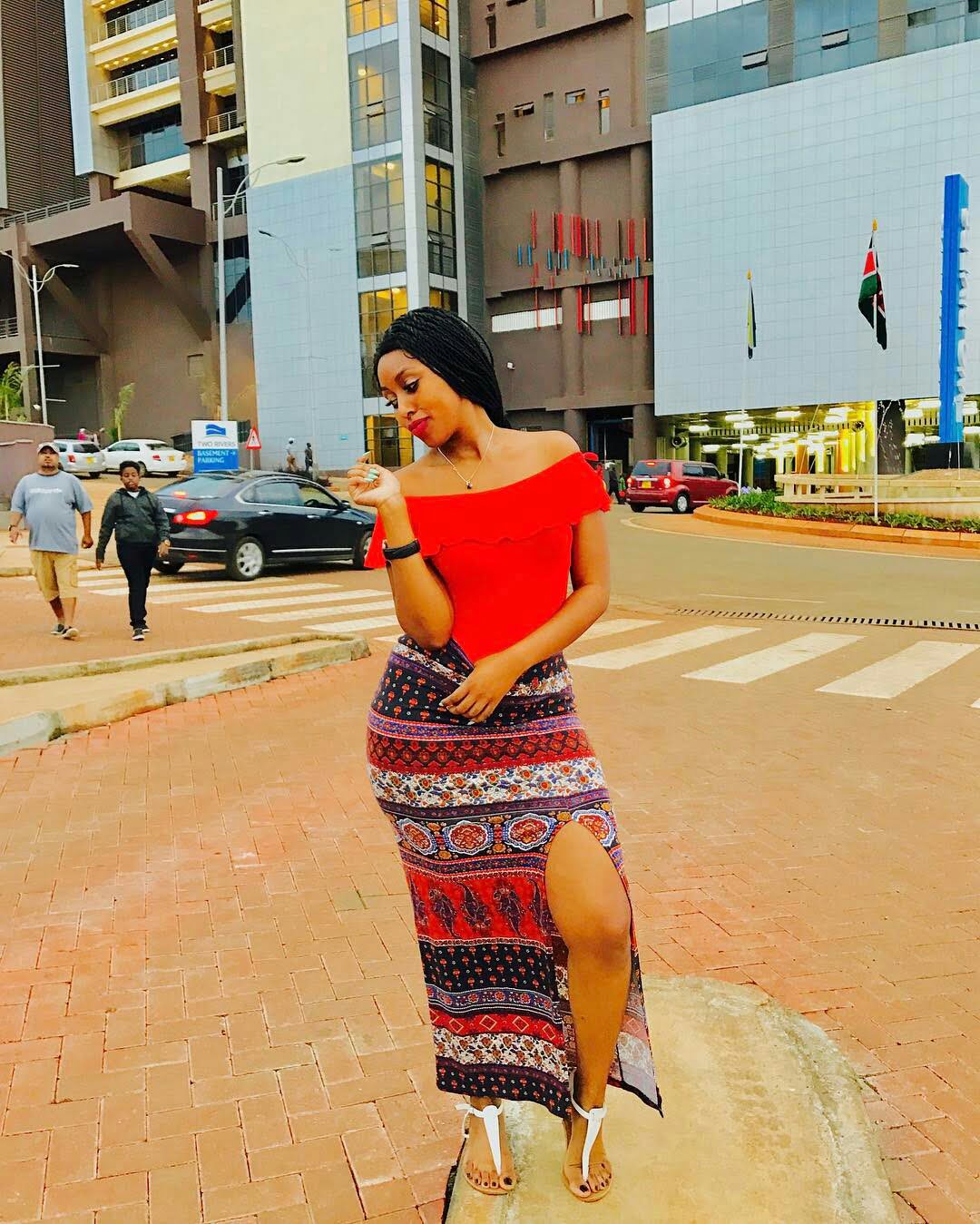 CAPTION: They call themselves “slay Queens” but really these are just women who sleep with a plethora of men for financial gain. They portray an image of happiness, but deep inside, they’re extremely sad lonely and dejected.

However it is extremely unfair for women who we know are “kept” characters, posturing as inspirational figures in society. By now, you might have seen how we’ve demolished Julie Gichuru, once a darling of the media and beloved by Kenyans. It dawned on Kenyans that this privileged brat had no moral authority to even comment on national issues, because she has never struggled in her life. Growing up with a silver spoon, she then married into wealth, which was accrued from proceeds of crime.

Its been a bad period for her equally old camel friend Caroline Matako, who entrenched feminism in the country using her high-flying career in the media industry. Her ratings dipped so drastically, that her Ghanaian benefactor Patrick Quarcoo relegated her to an office role, away from media.

But despite the obvious reality, these two old hags still want to antagonise Kenyans with their lectures, as if we eat in their houses. They want us to forget that their ass kissing got them jobs at Brand Kenya Board, and now they want to use us again, while trying to manipulate some form of consensus in accepting “peace” as their bargain tool for proximity and state jobs.

Unfortunately Kenyans are an awakened lot now. We have not time for sanctimonious and pretentious feminists, because we know they’re the root cause of the current problems we have in Kenya today. Mutoko built her career around male-bashing and unfortunately back then we were helpless as we watched her tear into weak men while misleading young women into adopting prostitution as a way of life.

Feminism, which teaches women to think of men as the enemy, has made women “angry” and defensive, though often unknowingly. Now the men have nowhere to go. It is precisely this dynamic – women good/men bad – that has destroyed the relationship between the sexes. Yet somehow, men are still to blame when love goes awry.

We can see off-shoots of Mutokoism in the ways of her Kamba sisters Lillian Muli and Betty Kyalo, who preach consumerism and use their social media to portray a plastic life of success, yet we know they bleed every night from their comedy of errors. These are women who cannot be embraced by other women as wives and mothers, and also cannot have normal lives in the mainstream business set-up, a playground for men.

So they’re left looking for validation in the night-scene, which is why you will always be seeing Betty Kyalo in Kiza Nightclub, where she will be readily accepted because as they give her a soft-landing, she gives them publicity. Win-win. But at what expense?

Feminism has really misguided today’s professional woman. Professional women’s default presumption is that it is always sexism that is holding them back from breaking through the ‘glass ceiling’, but as is women’s warped conditioning, their first thought is that their problems are caused by men. Never is there an insight that they may simply lack the skills or that they don’t perform at their peak in a job they were told should be rewarding to them.

The truth is there are very few women whether in Kenya or beyond who actually create something of worth because the easier path to success is to create a social convention that shames men for not including women in their own successes. It will always be easier for women to live off the success of men rather than create anything for themselves. And that’s the very basis and framework under which feminism thrives.

Women don’t invest or build functional Enterprises because it’s not sexy. It requires a degree of commitment and a depth of insight that goes well beyond what an average woman has any interest in. Your average Kenyan woman is looking for a sponsor to take her on holiday or pay her rent. She has no perseverance or staying power in business.

Women can’t build. They take over what men have already made a success. Ask women to start a company with you and not one will want to patiently grow the enterprise with you. Years later when its a giant the same women will petition the powers-that-be to force you to make spaces for women because Gender Quota. Such crap! The only thing women can start is human life. And that is more important than all the businesses of the world combined and tripled. But since women have come to look down on that marvel as something that holds them back or whatever, they are left trying to swim with sharks in the business world.

You see, equality (the religion of feminism) would have women believe that what makes men happy must necessarily be what makes women happy – or would make them happy in the long term if only the “patriarchy” would allow women the same opportunities to experience it. That’s why Nairobi women are sleeping with the most men, or struggling in the business world, in pursuit of that “high” which they perceive as the motivation for men towards perfection.

However when you see the pain and bitterness exhibited by the likes of “successful” women like Caroline Matako and Julie Gichuru, when you see a girl way in her thirties like Betty Kyalo living off handouts from Governors, when you see all these bitches refusing to even show the men sponsoring their trips and holidays, it shows a greater crisis at play. One of sadness, innate bitterness and unfulfillment. Mutoko went to adopt a child, Kyalo, Muli etc divorced their husbands in pursuit of sexual fantasies and financial gain, while single mothers are strewn all over the city.

Why are these “successful” women unhappy? Why do they cry every night in bed? Why do they stock wine and hard liquor in their houses to help them sleep? Why are they alcoholics and chain-smokers?

Women in this feminised environment they created, are unhappy because they expect unhappiness. They’ve been taught that the security they sought in men was a weakness; one they need to compensate for. They were conditioned to feel shame for that need, that masculine comfort, even when they know security is never going to be guaranteed in the best of possible cases. They’re unhappy because they were taught that men’s happiness is better than women’s happiness and that’s the path they ought to follow no matter the sacrifice, no matter the damage to the family. They were taught that feminist pride and equalist hubris were a better substitute for a family – they believed the lie that they would just be ‘happy captives’.