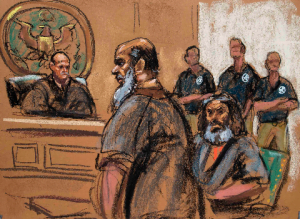 An Egyptian man was sentenced in New York on Friday to 25 years in U.S. prison in connection with the 1998 bombings of U.S. embassies in Kenya and Tanzania that killed 224 people.

Adel Abdul Bary, 54, pleaded guilty in September to three counts, including conspiring to murder U.S. citizens abroad, as part of a deal that limited his maximum sentence to 25 years.

U.S. District Judge Lewis Kaplan, who in September briefly considered rejecting the agreement as too lenient, said Bary could be released in approximately eight years after receiving credit for more than 15 years already spent in U.K. and U.S. custody.

“You, unlike victims of the embassy bombings, can look forward to rejoining your family and living out your life in freedom,” Kaplan said.

Prosecutors said at the time of the plea that Bary, who had initially faced 224 counts of murder and scores of other charges, was not as culpable for the bombings as other members of the al Qaeda conspiracy.

His primary role, they said, was that of a “communications facilitator” who disseminated messages from al Qaeda leaders to the public, including claims of responsibility for the embassy bombings. He was not accused of planning the attacks.

His sentencing came in the midst of the trial of Bary’s co-defendant, Khalid al-Fawwaz, who U.S. authorities say served as Osama bin Laden’s representative in London.

At Friday’s sentencing, Edith Bartley, whose father and brother died in the Kenya bombing, urged Kaplan to hold Bary accountable for the “heinous, cowardly and barbaric” attacks.

“We want to ensure he has to think about his responsibility for these murders for the rest of his life,” said Bartley, who has also been attending al-Fawwaz’s trial.

Bary spoke briefly in court, saying he felt sorry for Bartley and the other victims.

“If I could just do something to bring the victims back, I would do it,” he said through an Arabic interpreter. “Unfortunately, I can’t.”

Bary was extradited from the United Kingdom to the United States in 2012 following a protracted legal battle. He plans to apply for permission from the U.S. Department of Justice to serve his sentence in the United Kingdom, though Kaplan said he hoped that request would be rejected.
Reuters