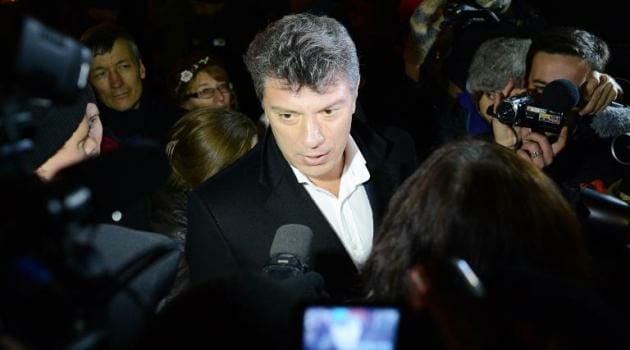 Russian opposition leader Boris Nemtsov, a fierce critic of President Vladimir Putin, was gunned down while walking in sight of the Kremlin late Friday, prompting an international chorus of condemnation.

The murder of the 55 year old politician, an outspoken critic of Russia’s involvement in Ukraine, came ahead of a major opposition rally he was set to lead this weekend and sent shock waves across the country.

US President Barack Obama led condemnation of the “brutal” and “vicious murder” of Nemtsov, whom he had met on a visit to Moscow, and called on Russia to conduct an impartial probe of the killing.

The murder “bears the hallmarks of a contract killing,” he said on radio, describing the killing as a provocation.

Police and investigators said Nemtsov was shot by unidentified assailants as he was walking with a woman along a bridge just metres (yards) from the Kremlin.

“According to preliminary information, an unidentified person shot at Boris Nemtsov no fewer than 7-8 times from a car as he was walking along the Bolshoi Moskvoretsky bridge,” investigators said in a statement.

An AFP reporter saw a blood stain on the pavement on the side of the bridge near the red walls of the Kremlin, with roses laid by a police barrier at the scene.

In one of his last tweets, Nemtsov urged Russians to take to take to the streets and join a major opposition rally planned for Sunday.

“Are you tired of lies, propaganda, war and price hikes?” he wrote on Twitter. “Then come to the ‘Spring March’.”

After working as a research scientist in the late Soviet era, Nemtsov rose to prominence as governor of the Nizhny Novgorod region in central Russia and became a vice prime minister in the late 1990s under the presidency of Boris Yeltsin.

After leaving parliament in 2003, he led several opposition parties and groups.

An accomplished orator with a rock star image and popular with women, Nemtsov was one of the key speakers at mass opposition rallies against Putin’s return to the Kremlin in 2012.

He developed a reputation for writing critical reports about corruption and other misspending under Putin.

In 2013, he said up to $30 billion of the estimated $50 billion assigned to the Olympic Games Russia was to host in Sochi had gone missing.

The Kremlin has denied the claims.

The brazen killing in central Moscow recalled the high-profile shooting of anti-Kremlin reporter Anna Politkovskaya, who was gunned down in the Russian capital on Putin’s birthday in 2006.

“This is payback for the fact that Boris consistently, for many, many years fought for Russia to be a free democratic country,” opposition leader Mikhail Kasyanov, who served as prime minister under Putin, told reporters after viewing the scene.

“In the 21st century, in 2015, a leader of the opposition is shot dead by the Kremlin walls. It is beyond imagination.”

Washington was among the first to condemn the killing.

“We call upon the Russian government to conduct a prompt, impartial, and transparent investigation into the circumstances of his murder and ensure that those responsible for this vicious killing are brought to justice,” Obama said in a statement.

“Nemtsov was a tireless advocate for his country, seeking for his fellow Russian citizens the rights to which all people are entitled.”

“The murderers’ shot has destroyed it. I think it is not by accident.”

Thorbjorn Jagland, secretary general of the Council of Europe, added he was “shocked and appalled.”

“Killers must be brought to justice,” he said on Twitter while London said it was “shocked and saddened”.

“We deplore this criminal act. Those responsible must be brought to justice,” a Foreign Office spokeswoman said.

Kasyanov said organisers had scrapped plans to hold the Sunday opposition rally and planned to conduct a funeral march in central Moscow instead.

“We all loved him. With a devil may care attitude but a very good guy.”

Boris Akunin, one of Russia’s best loved authors, said Nemtsov was one of the most fearless people he had ever met. Cursing the killers he wrote on Facebook: “And you be damned, ghouls.”

Would you like to get published on this Popular Blog? You can now email Cyprian Nyakundi any breaking news, Exposes, story ideas, human interest articles or interesting videos on: [email protected]. Videos and pictures can be sent to +254 710 280 973 on WhatsApp, Signal and Telegram.