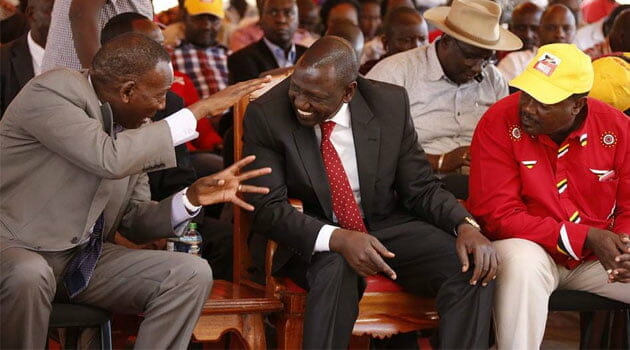 Nkaissery thanked the government for his recent appointment and urged residents to support the Jubilee administration implement development plans.

“I am asking you to support the Jubilee administration because never before has anyone from this area held such a high ranking Cabinet position,” Nkaissery said amidst applause.

The minister who was addressing a thanksgiving prayer meeting that was organised following his appointment at Ngatataek Primary school grounds pledged to serve all Kenyans with commitment to realise better security.

Addressing the same meeting, the Deputy President who took charge of JAP campaigns for the third time asked residents to vote for Patrick Tutui for the sake of unity and speedy development of the area.

“I am here today to ask you to support Mr Tutui to continue from where General Nkaissery left,” he said.

Ruto said the Jubilee administration was committed to serving all Kenyans and asked Kajiado residents not to be cheated by the opposition.

“Do you want to join us to move this country forward or join the opposition that has nothing to offer?” he asked.

He maintained that the government is committed to the development of infrastructure across the country to ease movement of goods and services adding that Kajiado County will benefit from a 200 kilometre tarmac road within five years.

The DP noted that among other programmes, the government is investing heavily in education so that all children access quality education.

“The government has increased allocation to the free primary education by 35 percent, raising the figure from Sh28billion to Sh40 billion,” he said.

Would you like to get published on this Popular Blog? You can now email Cyprian Nyakundi any breaking news, Exposes, story ideas, human interest articles or interesting videos on: he[email protected] Videos and pictures can be sent to +254 710 280 973 on WhatsApp, Signal and Telegram.