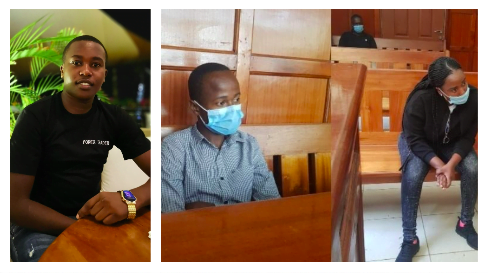 LEFT: Paul Mugenda – Facebook user who has strongly come to the defence of Moses Gatama RIGHT: Moses and Eunice Wangari during a past court hearing of their case

A fresh twist has emerged on the headline-making case of Eunice Wangari Wakimbi, the woman who was allegedly thrown off the 12th floor of a Nairobi building by a boyfriend she met on Facebook.

This is after a man identified as Paul Mugenda, the former employer of the suspect, Moses Gatama, released a statement via social media on Wednesday detailing a different account of events that occurred on the fateful night of September 13, 2020, at one of his offices at Ambank House within Nairobi CBD.

Mr Mugenda claims that many of the articles that were published by various local dailies contained information that was inverse to what he knew.

Earlier in the week when the story first broke, it was reported that the couple (Gatama and Wangari) had bought alcohol, food and sneaked into Mugenda’s offices that evening.

While drinking the night away, Wangari is said to have rejected Gatama’s sexual advances which angered him and to a fight that saw her being thrown down from a window on the 12th-floor to the 9th floor where she landed and suffered serious pelvic injuries that saw her admitted at the Kenyatta National Hospital (KNH) for two months.

Threw herself off the building

But according to Mugenda, after the argument arose, his employee’s girlfriend wanted to leave immediately which prompted Gatama to try and calm her down since he felt it was rather late for her to exit without any proper means of transport.

In the midst of the heat, Wangari is said to have unsuccessfully attempted to escape from the building through the window.

“His version still remains that they were drinking in the office, an argument arose and his girlfriend left hurriedly.

He went after her in an attempt to cool her down and tell her it’s too late to leave in such a state without transport means and so on.

He claims to have known that if she was flagged down around my office drunk, I’d have fired him anyway so he had to convince her to cool down.

So after going back to lock the office he found that the lady had jumped from the building, from 12th floor to 9th floor (pictures attached).

He rushed to call for help and luckily the security guards were there to help,” read part of his long Facebook post.

Mugenda also claims he reached out to Wangari, who admitted to having been heavily drunk that night but could not remember exactly whether or not she was thrown off the window as she had alleged.

He further argued that the story which caused media outbursts was in fact not given with Wangari’s consent or version of events, adding that it was written randomly by a blogger with either intention of fame or attention.

“I went a step further and called his girlfriend.

Turns out the story published; coursing media outbursts wasn’t given with her consent or version of events.

It was written randomly by a blogger with either intention of fame, attention or something else.

On her side, she was drunk and doesn’t quite remember what exactly transpired that night, only the argument but being thrown off? Not exactly,” he wrote on the post embended below.

Wangari’s case was for the better part of the week the bone of contention among Kenyan netizens and even turned into a full-blown trending topic after Homeboyz Radio presenters Shaffie Weru, DJ Joe Mfalme and Neville Muasya brought it up in their morning show discussion.

The radio presenters controversial comments were deemed to have demeaned the victim and as a result, they were served a suspension by their employer.