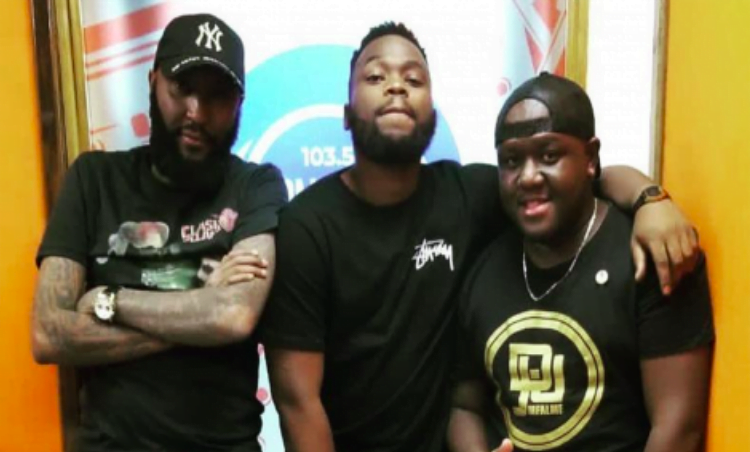 Hours after Homeboy Radio General Manager, Somoina Kimojino disclosed that radio presenters Shaffie Weru and DJ Joe Mfalme and Neville Muasya would face disciplinary action over their remarks on a sexual violence survivor, the station issued a fresh statement on Friday evening confirming the inquiry into their conduct had been concluded.

In the brief shared on their social media pages, Homeboyz  Radio announced the suspension of the three employees for a period of 2 weeks as a reprimand for their actions earlier in the week.

“Following our statement earlier today the disciplinary inquiry on the conduct of Homeboyz Presenters Shaffie Weru, Neville and DJ Joe Mfalme has been concluded.

The inquiry has given us enough and justified reason to suspend the presenters with effect from today for a period of two (2) weeks,” read the notice in part.

The station further revealed that during their period, the trio, as well as their colleagues, shall undergo “mandatory” gender awareness sensitization training accompanied by lessons on ethical reporting and on-air discussion of such sensitive issues. 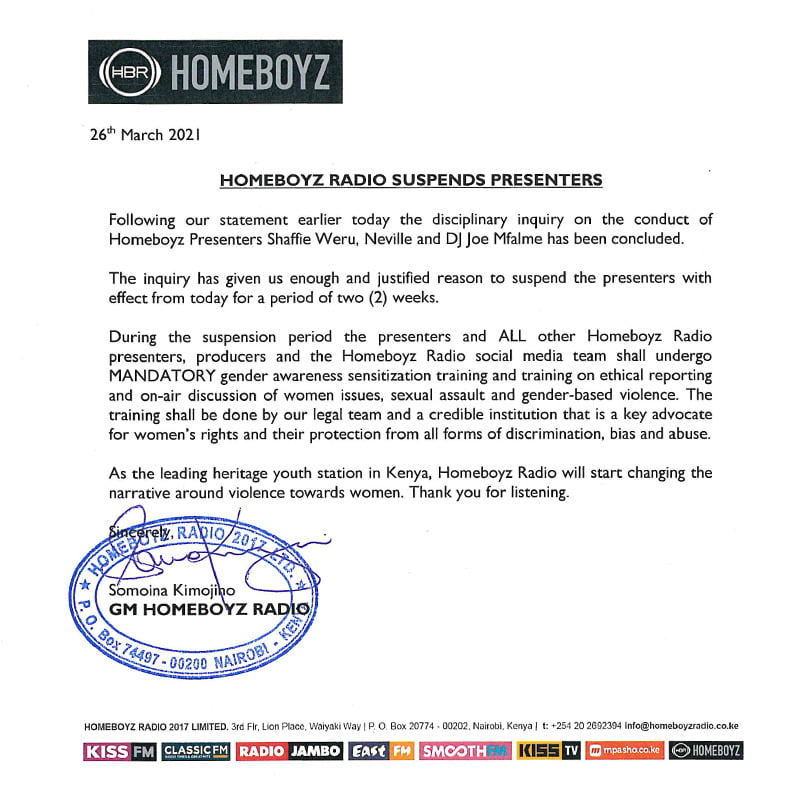 During their morning show, The Lift Off, the three discussed an incident in which Eunice Wangari Wakimbi, 20, was thrown off the 12th floor of Ambank House by a man she had met on Facebook.

In a clip that went viral on Thursday and has since been deleted, the hosts engaged their audiences by advising women on how they should play hard to get and occasionally be unavailable.

Only posting the deleted video here for reference, but pls do not listen to what these three grown men are saying. They've got a very skewed, ignorant and misogynistic way of thinking. pic.twitter.com/fgEOYrjTAQ

Their’ conversation centred on an ongoing case in which the woman narrated to a Nairobi court how her boyfriend, whom she met on Facebook, allegedly threw her from the 12th floor of Ambank House while they were drinking together on their first date.

She told Nairobi Principal Magistrate Esther Kimilu that she had been invited by one Moses Gatama Njoroge and while drinking she rejected his sexual advances, angering him leading to a fight that saw her being thrown from a window on the 12th-floor landing on the 9th-floor balcony.

She suffered serious pelvic injuries and was taken to Kenyatta National Hospital (KNH) where she was admitted for two months.