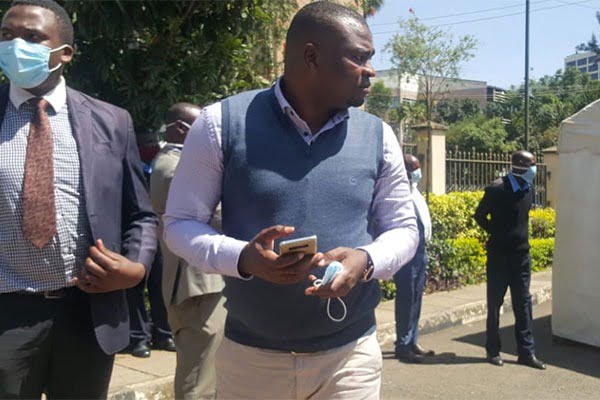 This is after it emerged that the Director of Public Prosecutions (DPP) intends to press further charges against him pending a report by the Firearm Licensing Bureau chairman, kenyanbulletin.com has learnt.

It is reported that senior prosecution counsel Kennedy Panyako Wednesday urged Justice Ngenye Macharia to suspend an order by a lower court that ordered the release of Echesa’s two firearms and his Range Rover.

Echesa who was fired in March 2019, gravitated fully towards Deputy President Dr William Ruto, and was caught up in a Sh40 billion fake firearms deal, which took a twist after one of the security officers at the DP’s office was killed.

Police Sergeant Kipyegon Kenei was laid to rest in march 2020, but the events surrounding his death still remains a mystery.

Still in early 2020, Echesa’s house was raided by detectives from Directorate of Criminal Investigations (DCI) where his firearms and motor vehicles were confiscated.

A widow, claimed that the former illiterate CS had forcefully taken a vehicle from her.

It was then reported that Echesa had illegally acquired a Toyota Land Cruiser registration number KBZ 009J from Esther Kabura in 2016, according to an affidavit sworn by a detective from the Serious Crime Unit (SCU). Detectives from the SCU and DCI also said the former CS is suspected to have fraudulently registered ﬁve high-end vehicles.

In the ongoing tussle over the return of Echesa’s firearms and vehicles, the DPP said they intend to pursue further charges.

“We intend to initiate further charges in lieu of the two firearms depending on the report the chairman will submit and the charges shall be rendered futile if the said firearms are released to Echesa,” an affidavit by the DPP read.

According to the documents, the firearms were taken to the FLB chairman for verification and a report has not been received because of the inconveniences caused by the Covid-19 pandemic.

Echesa has since challenged this.