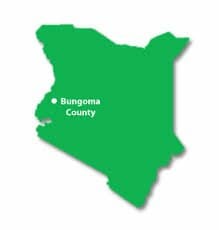 Residents of Sang’alo in Bungoma county have asked the government to investigate the death of a man who died at Namwacha AP Camp after he was arrested.
The residents led by Sang’alo West rep Mohammed Waswa raised concern on the circumstances under which Raphael Makokha who had a quarrel with his brother died in the hands of the police.
“We want the government to arrest two police officers who were on duty when our brother died because we suspect that he was bitten by the administration police officers,” said Waswa.
Contacted for comment, Bungoma AP Commander Paul Soi confirmed that the suspect died at the AP camp but denied that his officers were to blame for the death.
Soi told the press that Makokha was arrested following a domestic row with the brother. He said that Makokha had escaped from lawful custody and was later re-arrested and upon reaching the AP camp, he collapsed and died.
However, Bungoma county commissioner Maalim Mohammed said a postmortem to be carried out would determine the cause of the death. “At the moment, we really cannot be sure of what killed the suspect but postmortem will reveal to us the cause of the death and appropriate action will be taken against whoever may have caused his death,” he said.

In this article:Bungoma County Politics