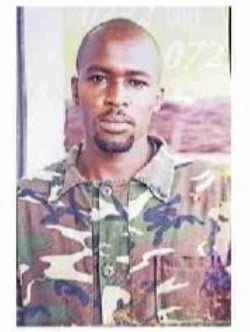 CAPTION: 44-year-old Christopher Nderitu who was killed by a speeding motorcade to Sagana on Sunday

Hours after the incident happened, it is now reported that a senior member of the Kenyatta family was among the occupants in a speeding convoy of vehicles which were involved in fatal a hit and run this past weekend which left a disabled man dead.

Taking to his social handles, Jubilee orphan turned William Ruto sycophant Dennis Itumbi dropped the revelation, further adding that apart from the unnamed Kenyatta family member, a Cabinet Secretary, as well as senior parliamentary official, was part of the motorcade.

Attached to Itumbi’s post was an excerpt of a story published by a local daily with claims that police have now gone silent on the identity of the person whose convoy ran over and killed the 44-year-old Christopher Nderitu in Karundas, Nyeri County, as they rushed to Sagana State Lodge for President Uhuru Kenyatta’s meeting.

“Accidents happen, but take responsibility,” read part of the caption.

HUSTLER Charles Nderitu was killed by THREE cars SPEEDING to Sagana @StateHouseKenya. The Passengers in were; A Senior Kenyatta Family member, a CS & a Senior Parliamentary Official.

Even as police insist that they are yet to find any culpable suspect in the accident, eyewitnesses say that Mr. Nderitu was crushed to death by three vehicles that were speeding as he escorted a friend along the Sagana-Chaka Road right after they ignored a speed bump right at the entrance of Karundas Primary School.

The first vehicle threw him off the wheelchair shortly before the other two ran over him.

Raha Wambui, Nderitu’s mother, when questioned by the press said the accident happened five minutes after he left his electronics shop at Karundas.

His widow, Fortunate Muthoni, expressing dissatisfaction in the manner the incident was handled, noted that Nderitu was dumped in the hospital and left on his own, adding that Health CS Mutahi Kagwe sent someone from his office and area sub-chief to their home to “request for information”.

“He was treated like a lowly person. It is sad that I lost a husband and breadwinner. Our son is still in school,” she said.

At the same time, reports are doing rounds that a police signal and situational report on the accident was shared with only a few senior police officers via messaging platform “WhatsApp” in an apparent attempt to keep the matter private, with police failing to reveal any more information on the accident.