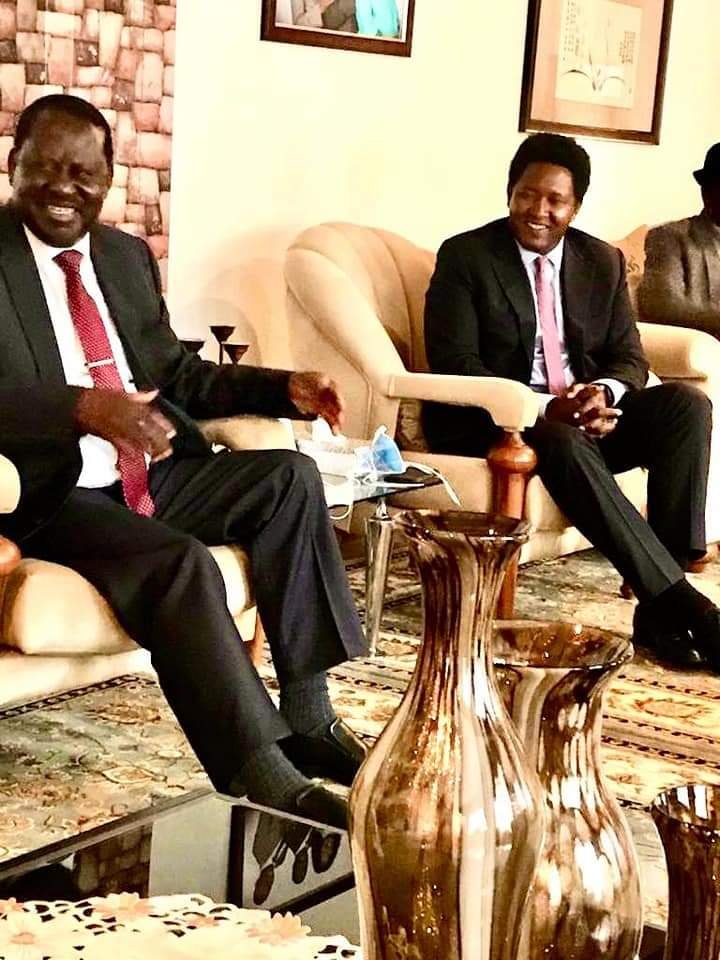 CAPTION: ODM Party Leader Raila Odinga with Narok Senator Ledama Ole Kina and a section of Maasai leaders at his Karen home this morning where his forgiveness was delivered

Weeks after he was forcefully kicked out of the Chairmanship of the powerful Senate County Public Accounts and Investments Committee, Narok Senator Ledama Ole Kina, who previously appeared to be on his way out of the ODM Party, has proven his critics right by curling back down under Raila Odinga’s powerful political wings.

On Tuesday morning, the outspoken lawmaker led a delegation of the members of the Maasai community into a meeting with the former Prime Minister at his Karen Home.

ODM had questioned Senator Ledama’s loyalty and accused him of secretly aligning his allegiance to the besieged Deputy President William Ruto and as a result, sabotaging the party’s plans to have Kisii Senator Sam Ongeri take up the prestigious responsibility to oversee the powerful committee.

After the relationship between the party and Ledama turned sour, he was kicked out from the House Business Committee and from the CPAIC where he had just been elected.

Consequently, Ledama accused the party of being undemocratic and arrogantly warned its officials, including party leader Raila Odinga that he is a “wrong number” to joke around with.

However, during the last Friday’s Senate session that sealed the fate of Tharaka Nithi Senator Kithure Kindiki as House Deputy Speaker, Ledama declared that he is only loyal to ODM and its boss Raila Odinga.

“If my party chooses to de-whip me because it perceives me as disloyal, it does not matter how badly I fight it, the only thing I can do is to convince them that I’m loyal and fight for what is mine from within. However, as a house we may need to define the difference party loyalty and meritocracy but for Kindiki, it boils down to loyalty. I want to assure my party leader that despite the rumours you are getting, I’m loyal to the ODM,” SENATOR LEDAMA OLE KINA SAID.

Following the completion of the meeting, Raila announced through social media that he had forgiven Narok Senator Ledama Ole Kina for challenging the party position on the constitution of Senate committees.

He added that as a result, he has instructed the party to reverse its former decision to dewhip the rebellious Senator.

Senator @ledamalekina has this morning agreed to withdraw the case he had filed against @TheODMparty over the Senate Public Accounts Committee chairmanship, surrendered the seat and apologized. In return I’ve instructed the party to reverse the decision to dewhip the Senator. pic.twitter.com/SdFZWT5QIm