Siaya Senator James Orengo has gone to court claiming ownership of the controversial 10,000-acre parcel of land that Miwani Sugar Company sits on.

Senator Orengo, on behalf of the Assian owned Crossley Holdings Limited, wants the court to issue eviction order to the Miwani Sugar Ltd.

In the petition seen by cnyakundi.com,the Senators clients also want the almost collapsed Miwani Sugar to be fined sh6 billion in damages.

Alternatively, the firm wants Sh4.6 billion being the current market value of the land with interest from the date of filing the petition until payment in full and any other loss of income incurred until the petition is heard and determined. 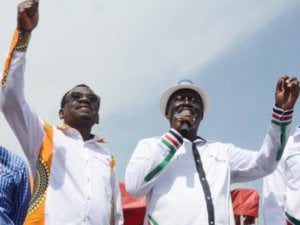 Raila Odinga’s close ally has gone behind his ‘political boss’ back in a case that is creating a twist in the planned leasing of the state-owned sugar factories.

Senator Orengo’s client, Crossley Holdings Limited has sued the Cabinet Secretary, Ministry of Agriculture, Livestock and Fisheries as the first respondent, the Agriculture and Food Authority as the second, County Government of Kisumu as third and the Attorney General as the fourth.

The suit is supported by an affidavit sworn by Buggar Singh, the director of the company with the full authorisation of the board of directors of the company.

“We want a permanent injunction prohibiting each and all the respondents together with their agents, officers, workers, servants, representatives and heirs from interfering with the petitioner ownership, possession and title to the land and stopping them from selling or leasing the land,” read the court documents.

The petitioner who is being represented by James Orengo, claims he is the registered proprietor of the massive parcel of land as LR No 7545/3 which he says is currently occupied partly by trespassers and illegal settlers