Former Tiaty MP Asman Kamama has accused Baringo Senator/Kanu Chairman Gideon Moi of being the force behind his loss of three state jobs after he was fired from the National Social Security Fund board.

“The people fighting me are William Kamket (MP Tiaty) and Kanu leadership. They have ensured that I do not serve in any position in this government,” he said.

He unsuccessfully defended his parliamentary seat on a Jubilee Party ticket in 2017 after he lost to Kanu’s Kamket, a die hard sycophant of Gideon Moi.

The former chair of Parliament’s National Security committee was appointed by Labour Cabinet Secretary Simon Chelugui to the NSSF last week but was revoked through a special gazette notice.

Revocation of Kamama’s appointment was done by the Office of the President. 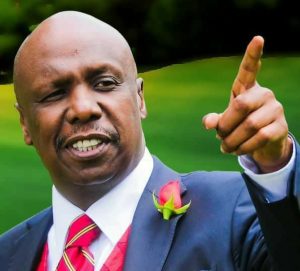 The former Tiaty Mp is perceived to be a Tangatanga sympathiser, an outfit associated with the DP William Ruto who is Moi’s rival.

Kamama said that he is no longer interested in state jobs but he has booked an appointment with President Uhuru Kenyatta to find out what his crime is.

He said he will be accompanied by all the leaders from West Pokot including Governor John Lonyangapuo.

Kamama also accused Kanu of superintending the affairs of Kalenjins in Jubilee government and it is doing so by witch-hunting perceived enemies.