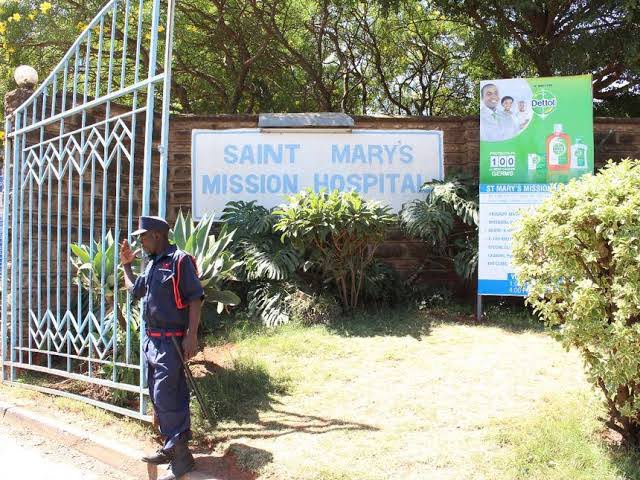 Previously we were concerned but now we are shocked lot of nuns.

It is with disbelief and shock that we inform you of the sudden resignation of the sensible 70% of the Board of Governors of the St Mary’s Mission Hospitals. The board

consisted of 11 members out of who 7 tendered their resignations in quick succession. The members who resigned are:

The resignations were tendered between 28th and 30th January 2019. Sr Bernadette convinced the following persons to remain:

Confirmed information from our Church Road Head Office after an emergency meeting over the weekend is that the resignations were because of financial mismanagement at the Hospitals in the hands of ASN Superior General, illegal HR and Procurement Practices and most importantly a request by the Superior General for the Hospital Board to accept liability of the monies withdrawn and already spent from Prime Bank to which the Board blatantly rejected and some members walked out. This is the money that was given to Mr Zachariah Baraza, Mr Charles Owino, Mrs Wambugu, Cardinal John Njue and others last year. The Board was also under pressure from the Superior General to pay Mr Zachariah Baraza another Kshs 35,000,000 for services that the Superior General could not explain.

After these resignations and in panic mode, our Superior General hurriedly constituted another Board without due consultations to ensure that she brings on Board persons who shall be her puppet and implement what she wants. The new Board now consists of:

Eventually, the new Board now consists of 50% Kamba people and so the Superior General is assured of 50 + 1 majority support for her strategies. She needed a Board that shall accept liability of the monies she withdrew from the Hospitals, Prime Bank and G T Bank and irregularly spent. She also wants Mr Baraza paid extra Kshs 35,000,000 for private purposes

Mr Musyoki Mbandi has virtually no mental capacity to be Board Chair of St Mary’s Mission Hospitals, he was hurriedly appointed to implement the agendas of the Superior General, but not to use his little knowledge and inexperienced brains. He is just supposed to follow his tribes-lady to the letter and ensure that Kamba people occupy the top seats. He was a member of the Finance Committee of the Board and despite his knowledge on the financial scandals, he quickly accepted to Chair the new Board. We are sure he is in the syndicate of covering up all the financial misappropriations that have been done by the Superior General and Sr Maureen Nakhungu, our congregational Bursar. One wonders how much he has been promised from the missing Kshs 171 million. Is he going to share this Money with Opus Dei, Strathmore Vice Chancellor or it’s only for individual gain? Is Strathmore University aware of his scandalous engagement with Sr Bernadette Munyao? It is really unfortunate that the most reputable tertiary teaching institution in Kenya in the field of Law has employees of this calibre. Has Opus Dei Okayed this fraudulent weekend night appointment? This email is copied to Strathmore University and Opus Dei so that when investigations into the missing 171 million culminate, Opus Dei, the Chancellor and Vice Chancellor may not claim they never knew of the scandal involving their employee. We hope he is not going to soil the good name of Strathmore University because of his greed for blood money stolen from St Mary’s accounts without the knowledge of ASN Registered Trustees.

We thought that Mrs Jacinta Mutegi has integrity, but we are now taken aback on learning that she quickly accepted to replace Fr Moses Kago as Church representative in the Board. Did she consult to understand why the other Catholic Diehard Professionals in the Board had suddenly left the Board or has she also been promised part of the missing Kshs 171,000,000 from G T and Prime Bank? It would be very unfortunate for Jacinta Mutegi to come to ASN and rubber stamp glaring financial irregularities so that she gets kickbacks from her friend the Sr Superior. Let her know that ASN is bigger than Sr Bernadette. If Jacinta is ready to soil her name and that of KCCB, let her sign the documents which previous Board members refused to sign. If she is not satisfied with the salary she gets from KCCB she should ask for pay rise but not partake of swindled money and rubber stamp financial irregularities. Why join the Board now yet she had declined before? If indeed Jacinta rubber stamps these expenditures, KCCB should bear the consequences.

Dr Peter Kilonzo is a good bone surgeon who frequently spends nights in our convent at St Mary’s Langa’ta and has no capability to tell the Superior a contrary opinion in the Board. He is the new chair of the Finance function of the Board. It is highly advisable that Kilonzo concentrates on assisting us with his good surgical work and marriage life. He is a professional and should desist from being used as a rubber stamp. However, if he choses to sacrifice professionalism at the alter of tribalism and financial greed, so be it.

Sr Christine Kagunye is firmly under the oath of obedience to the Superior General, she has no capability to tell the Superior a contrary opinion. She should just concentrate lecturing at Jomo Kenyatta University before she gets unnecessary grey hair and Heart attack. She should remember that this is the same Sr Bernadette who removed her from the seat with exceptional disrespect. Sr Christine is one of the ASN Registered Trustees and yet she did not know about the monies from the Hospital and Prime Bank but now Sr Bernadette wants her support, keeping on calling her now and then. The names Sr Christine had floated for the Board were all rejected by the Superior, but now she pretends to be very close.

Mrs Kristine O. Oraro is a sound minded lawyer who has been retained by ASN for years and so she is a confidant of Sr Bernadette’s underhand operations like evading some taxes here and there. It is clearly said that she has been one of the members disgruntled by the misuse of the money from Prime Bank but now it is shocking that she is now in the line-up to ratify the same financial misappropriations. However, it is understandable because most lawyers are thieves and given that she earns from ASN, she has chosen to sacrifice her integrity to please the Superior General. She has decided to support whoever is buttering her bread. The disturbing question is, does Mr Oraro take good care of Kristine, are they still together or are they financially struggling such that she needs to be part of dirty money?

Disowned by “One of Our Own”

Our greatest nightmare is the quick resignation of Prof Judith Mbula who used to be one of us and even ascended to the position of Deputy Superior General ASN, she is highly educated, experienced in corporate governance and comes from the same geographical area with Sr Bernadette Ndele Munyao. She is one of the few who know Sr Bernadette Ndele Munyao inside out. Professor Judith Mbula is one of the most respected and straightforward scholars close to ASN and to the Government.  For her to hurriedly quit the Board, something is terribly wrong, the scandal that is making Prof Mbula run away from us is surely very bad!!

Further, we are shocked and devastated that 70% of Board Members can resign and an illegitimate tribal Board is installed overnight without adequate consultations. In this new Board nobody has financial accounting knowledge, nobody to guide spiritually, no HR specialist, it is basically a tribal rubber stamp.

Central Bank of Kenya is involved

Sr Bernadette confined to one of us that in 2018, Mr Charles Owino organised several meetings at Central Bank of Kenya for her. The meeting of December 2018 at CBK was attended by Sr Bernadette, Mr Charles Owino, Mr Zachariah Baraza and some Central Bank Senior Managers so that they can assist Sr Bernadette to get Kshs 153,000,000 from Fr Fryda’s Medical Mission Trust. Mrs Wambugu the lawyer is also deeply in this circle for execution through the courts and kickbacks. After the said meeting some Central Bank managers asked for a kickback of Kshs 10,000,000 as facilitation fee. This is why Sr Bernadette was pushing the previous Board to pay Mr Baraza the Kshs 35 million or part of it so that it can be used to unlock the 153 million from Medical Mission Trust. With the new Board Chairman, she is sure of getting the facilitation fee to Mr Baraza and Mr Owino.

Sr Bernadette added that Mr Baraza is busy looking for the Judge who shall hear the application for the Kshs 153 million Medical Mission Trust money case. Mr Baraza is the one who was used to reach Judge Sila Munyao through the elder brother of the judge and the Prime Bank monies were released to Sr Bernadette.

Mr Baraza is also looking for atleast 2 out of the 3 Court of Appeal judges who shall hear the ownership appeal case by Fryda later in the year. She explained that part of the money that she gave to Mr Baraza was handed to some High Court Judges for favourable rulings and orders especially from Nakuru.

Mr Baraza is also looking for the Judge handling the labour case in Milimani court against the Hospital and ASN by former employees of St Mary’s. This is because the money withdrawn from Prime Bank Staff Salary account by the Superior General is featuring prominently in this case and we are likely to lose the case.

It is now with urgency that we call upon you to jointly and severally: –

The government cannot continue giving us deaf ears when we are screaming about real criminal activities by Mr Baraza, financial misappropriation of almost Kshs 200,000,000 by our Superior General and St Mary’s an institution of great public interest is collapsing.

Politely, we are conscious that we have taken the oath of secrecy and obedience to Our Superior General but silence over these matters is no longer canonical, please understand