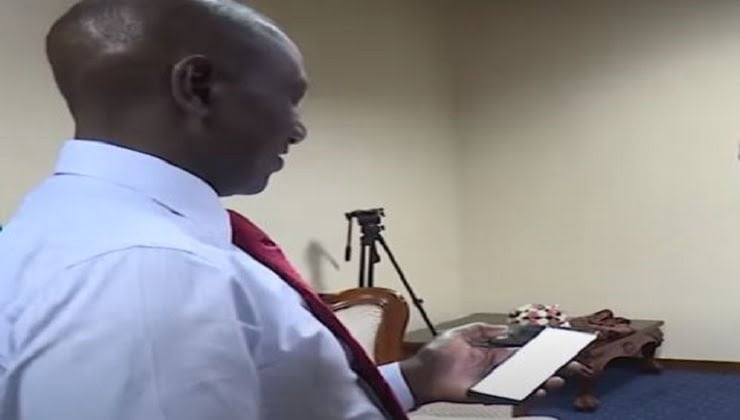 In the same week which Deputy President William Ruto looks to have slightly toned down his robust efforts to popularize the “Hustler” narrative, reports from the corridors of power have emerged that the Tanga Tanga brigade leader has in a rather peculiar move completely overhauled his entire social media team from the previous reckless managers to a more mature and responsible squad.

The gentleman, who has been posting as Mumbi Wa Wambui on Facebook, is now said to be the new man in charge of posting on Ruto’s accounts.

“The nonsense that has dominated the pages – including sheepish emojis and broken language plus meaningless dots that don’t depict the status of a DP, is being replaced by some sensible updates. Most probably upon realizing that the accounts could be his undoing as we near the elections,” he wrote on his post, adding, “The old team is left to run around with mobile-phones shooting and recording in rallies and walkouts in burial ceremonies attended by the DP.”

Earlier, there had been reports of a fight in Ruto’s communication team, specifically on the social media department, brought to the fore by the owner of the pseudo-Facebook account which insiders say they suspect to be a former State House employee who left in disgrace.

The account, which was created on June 28, 2019, suddenly gained a humongous following and in a slow and crafty way, escalated its presence on social media and as result, lighting up the mini-war in Karen.

The language in the updates, the number of comments and the shares, the frequency of posting and all other characteristics of the pseudo depict a fairly well-informed individual who must be utterly different from the face on the cover.

For a long time now, DP Ruto’s allies have capitalised on engaging their supporters and opponents on social media, with Dennis Itumbi leading the team and the likes of Senator Kipchumba Murkomen, Aaron Cheruiyot, among others, bringing in their legions of followers into the fray.

The strong social media presence, that includes the DP’s regular posts, perfectly fits into one of his overall plans to mobilise the youth vote.

Ruto is always diplomatic and civil on social media pages, but whenever a story he disagrees with appears in the newspapers, all diplomacy is dropped, often exhibiting raw emotion in his posts.

Currently, he has 3.6 million followers on Twitter and 1.6 million on Facebook where he regularly updates on his engagements and, save for his few outbursts against the press, the real battles are taken up by his online team, led by Itumbi, a former director in the State House communication team.