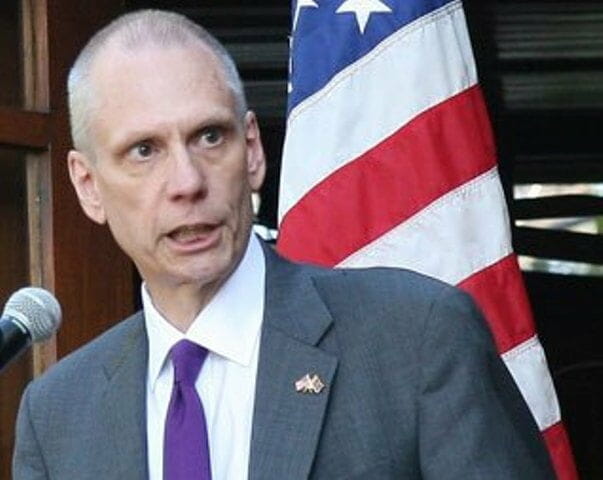 When Barack Obama visited Kenya, he hinted that his administration would take unspecified actions against top government officials involved in corruption and true to his word, last week, Ambassador Robert Godec announced that the US has slapped visa bans on Kenyans who have been implicated in corruption.
Godec did not release the list of the individuals banned as diplomatic rules and protocol demands that such people must first be informed formally in writing before their names can be made public but the list has leaked out and has been circulating though sources say the US embassy has already dispatched letters to the individuals.
We broke the visa ban as a lead story and two days later, America, Britain and European Union envoys were at Integrity Centre giving warnings.
According to our diplomatic sources, the name of William Ruto is at the top. The ban on Ruto is based on the ongoing ICC case. It is also said that Ruto has a number of active cases over his alleged involvement in corrupt deals.
Also in the list is Budalangi MP Ababu Namwamba who was the scandal-plagued chairman of public accounts committee of the national assembly which was disbanded and reconstituted afresh with Suba MP John Mbadi succeeding him.
The Pac team was sent home after an investigation into claims that its members had been using their positions to enrich themselves through extortion and blackmail was proven.
Ababu’s deputy in Pac Cecily Mbarire of Runyenjes is also said to be in the list of those barred from setting foot on US soil. Other Pac members in the list are Ahmed Abass of Ijara, James Bett, Kesses and Omondi Anyanga, Nyatike.
Others in the list are former cabinet secretaries Charity Ngilu, Felix Koskei, Davies Chirchir, Michael Kamau and Kazungu Kambi. Others in the list are former registrar Gladys Shollei and the former geothermal development company CEO Silas Simiyu. Former secretary to the cabinet Francis Kimemia, former Defence PS Mutea Iringo and Peter Mangiti, as well as NYS director Nelson Githinji. Mangiti and Githinji were recently arrested and charged with corruption. Their case is ongoing.
Former director of Immigration Jane Waikenda’s name is also in the list of those banned from visiting the US.
Former chief of staff in Ruto’s office Marryane Keitany’s name has also appeared in the list. She was suspended after her name was mentioned in Uhuru’s list of shame after being accused of misappropriating Sh200 million from the Legislative and Intergovernmental Relations Office.
Former Nairobi city county secretary Lillian Ndegwa and former finance officer Jimmy Kiamba’s names are said to be in the list. They were also suspended after they were allegedly involved in corruption at City Hall. They have been charged with defrauding City Hall of millions of shillings in shady procurement deals.
Also in the list is former Transport PS Nduva Muli who is being investigated for irregularly selling property of Kenya Railway Corporation when he served as its managing director. He is also accused of influencing procurement at the KRC and other state corporations under his ministry.
The name of Caroli Omondi, former chief of staff in Office of the Prime Minister is also in the list. He had been implicated in the sale of a Sh400 million parcel of land belonging to Kenya Commercial Bank. KCB is said to have agreed to sell the land situated on Loita Street in Nairobi.
Machakos governor Alfred Mutua is among the governors who cannot set foot in the US. Former PS, Information and Communication Bitange Ndemo’s name has also featured prominently in the list.
Others in the list are former chief executive of Independent Electoral Boundaries Commission James Oswaggo who has been accused of irregularly awarding tenders during his tenure at IEBC for the procurement of electronic voter identification devices.
Others are Godana Doyo who is Isiolo governor, Alfred Keter, Nandi Hills MP, Sonia Birdi, nominated MP, Okoth Obado, Migori governor, Isaac Ruto, Bomet governor, Richard Lang’at, managing trustee of National Social Security Fund Peter Kebati, former MD Mumias Sugar Company, Rebecca Nabutola, former PS Tourism ministry and Paul Wasanga, former CEO, Kenya National Examinations Council.
Others are Evans Ngibuini, acting chief executive officer, Nairobi Water Conservation, Alex Kabuga, CEO Kentrade Agency, Charles Tonui, MD Kenya Pipeline, Ukur Yatani Marsabit governor, Lucy Mbugua, managing director KAA, Richard Onyonka, MP Kitutu Chache, Peter Munya Meru governor, Zablon Mabeya ex-lands commissioner and George Aladwa, former Nairobi mayor.
Also in the list are MPs in the Agriculture, Livestock and Co-operatives committee. Early this year, the committee members were involved in a bribery scam.
At one time, drama unfolded at the committee sitting when some members accused their colleagues of receiving a Sh4 million bribe to doctor investigations report before tabling it in the house for debate.
The committee’s chair, Mohammed Noor who is Mandera North MP was particularly accused of having been compromised to influence the outcome of the report after receiving the Sh4 million through his Equity Bank account from unidentified depositor.
The committee members are Adan Mohammed Nooru, chairperson, Kareke Mbiuki vice chairperson, Kabando Wa Kabando, Raphael Letimalo, Mary Wambui, Francis Waititu, Peter Gitau, Maison Leshoomo, Anthony Kimani, Alfred Keter, Justice Kemei, Philip Rotino, Korei Ole Lemein, Silas Tiren and Benjamin Washiali.
Others are Ayub Savula, Victor Munyaka, John Serut, Millie Odhiambo, Fredrick Outa, Maanzo, Daniel Kitonga, Opiyo Wandayi, Patrick Wangamiti, Frednard Wanyonyi, Florence Mwikali Mutua, Sulekha Hassan Juma, John Kobado, Paul Simba Arati and Awiti Bollo.