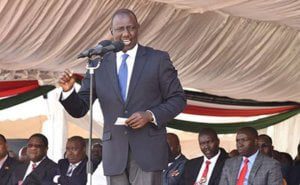 A local Kenyan blog has reported that Kalenjin MPs have alleged Deputy President William Ruto owns a vast amount of land in Congo where he has planted maize meant for export into the country.

The MPs identified as Joshua Kutunny, Alfred Keter, and Silas Tiren have accused Ruto of encouraging local farmers to switch to other crops like avocado and macadamia in order to create a shortage of maize in the country and an opportunity for him to import his maize from DRC.

The DP was also recently accused of having used his chopper to smuggle around 5 tonnes of gold from Congo to Kenya. The gold was estimated to be worth up to Ksh. 14 Billion.

The above MPs have, however, insisted that Ruto used the trip as an excuse to visit his farm in Congo.