Deputy President Dr. William Ruto has accused his rivals of sponsoring violence against him and his Tangatanga allies to frustrate his 2022 presidential bid.

The DP was speaking in Kisii where he preside over a fundraiser to support boda boda groups in the area He also accused violence schemers of using the police and the national administration to frustrate him.

Protests and violence were witnessed in the area ahead of his visit yesterday when his supporters clashed with the opponents in the streets of Kisii.

“The intimidation is aimed at causing mayhem during the 2022 elections. This country is full of learned people who will make the right decision on the voting day,” Ruto said.

The DP asserted that he played a key role in the making of Jubilee government and warned those trying to intimidate him from within to brace themselves for a tough political competition.

He also blamed the Raila Odinga led camp of hijacking the development agenda they had put in plans and pushed Jubilee into unnecessary politicking.

“We promised people that once we form a government, we were to create jobs and initiate development projects but that has not stopped” he added. 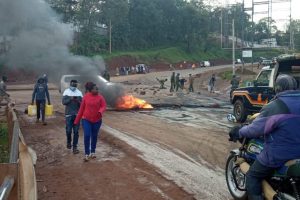 While addressing boda boda operators at Nyanchwa Adventist College, Ruto appreciated the region for the overwhelming support it gave Jubilee during the 2017 polls as he alluded that the administration had appointed several individuals from the community to different state departments.

“I have come to Kisii because our people need support. There are those who were born into rich families. They don’t understand the pain our mothers underwent to ensure we achieve our dreams,” said the DP.

The vocal DP further warned of alleged illegal orders issued on the provincial administration and the security agents. “The Inspector-General of Police should not be used to achieve political goals,” he said.

Ruto was hosted by Deputy Governor Joash Maangi, who promised never to support DP on his quest to be succeed President Uhuru Kenyatta as he will ensure that Ruto gets majority votes from the region in 2022.

“We have planned to travel together. The journey has just started. We may not shout about our plans but we remain determined and optimistic that we will get to the end,” Maangi said.

Dagoreti South MP John Kiarie who accompanied the DP claimed that he is aware of plans to arrest and harass Jubilee politicians allied to the DP.

“It doesn’t mean that those of us in Jubilee who support Ruto are disobeying President Uhuru Kenyatta. All of us are equal before the eyes of the Lord.” he said.

South Mugirango MP Sylvanus Osoro accused their attackers of trying to use divide and rule tactics frustrate their mission to country’s top leadership.

“The diversionary tactics will not stop us from demanding that we get answers on Kemsa theft. If they will not explain how they spent our taxes, let them prepare for countrywide public meetings to demand answers,” Osoro said.