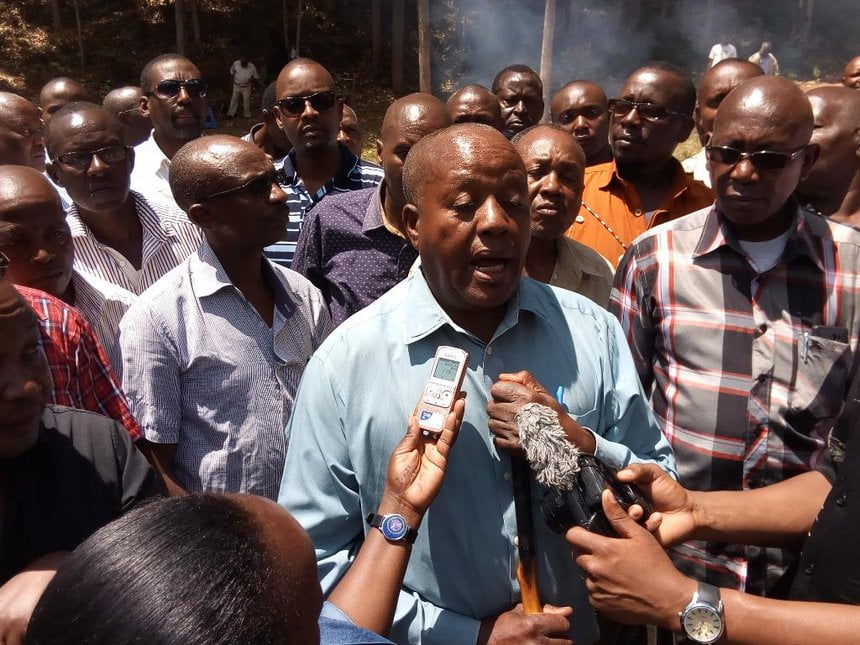 CAPTION: Kikuyu “elders” or extortionists masquerading as opinion leaders, during their meeting in Gatanga constituency, Murang’a county, where they placed curses on Royal Media Services chairman S.K. Macharia, saying he had betrayed his community.

Kikuyu Council of Elders congregated in Ndakaini at the end of last month, to perform a series of rituals against leading light SK Macharia.
The extortionists masquerading as Elders have promised that Royal Media Services and other companies by SK Macharia will collapse in three (3) months after they cursed him.

Claiming to have been sent by President Uhuru Kenyatta, the extortionists masquerading as “Elders” performed practices which the ordinary Kikuyu isn’t even aware of, like slaughtering a single-colored goat and offering it as sacrifice.

While partisan media have framed this as an act by old noble men, it appears as just another excuse to have a goat-eating ceremony by a bunch of old confused men.

These same so-called “Elders” use the same goat ceremonies to invite young girls and make merry with them under the guise of upholding Kikuyu customs and religions.

Young Kikuyu men have been drawn into these convenient narratives by their older “Elders”, not knowing that these same old men have made it their habit to sleep with their young girls. The reason young men can’t even marry is because these old “sponsors” have turned young girls into shores.

But SK Macharia has weathered many storms and is no stranger to such antics. Moi went out of his way to steal Madhu Paper Company from him. Moi literally brought his credit card company Royal Card Services to its knees. And Moi had also attempted to shut down Royal Media Services, where Macharia is seen literally fighting while dressed in his pyjamas.
Do a bunch of misguided old extortionists masquerading as Elders seem to think they can shake him because of his political stance?
Would you like to get published on this Popular Blog? You can now email Cyprian Nyakundi any breaking news, Exposes, story ideas, human interest articles or interesting videos on: [email protected] Videos and pictures can be sent to +254 710 280 973 on WhatsApp, Signal and Telegram.