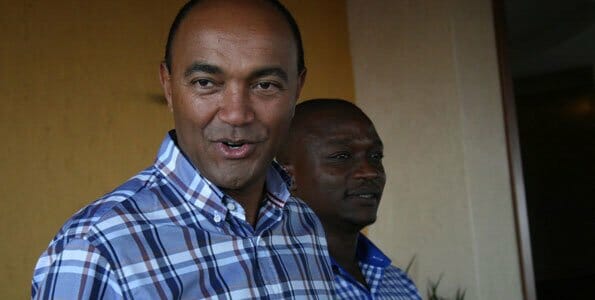 We recently ran a piece questioning Peter Kenneth’s integrity and silence amidst industrial-scale corruption by the incompetent Jubilee regime led by President Uhuru Kenyatta. We also correlated Peter Kenneth’s proximity to Uhuru, through his running mate and Ex-Starehe Boys Center henchman Ronnie Osumba, who is a known StateHouse functionary.

As the saying goes, mapenzi ni kama mimba; haifichiki and today’s appointments served to connect for Kenyans to see the turncoats masquerading as change-proponents.

GAZETTEN0TICENO. 1739
THE NATIONAL YOUTH COUNCIL ACT
(No. 10 of 2009)
APPOINTMENT
IN EXERCISE of the powers conferred by section 16 (2) (a) of the National Youth Council Act, .1, Uhuru Kenyatta, President of the Republic of Kenya and Commander-in-Chief of the Defence Forces, appoint— RONALD OSUMBA to be Non-Executive Chairperson of the Youth Advisory Board, for a period of three(3) years, with effect from the 18th March, 2016.

Don’t forget that these same characters Ronnie Osumba and Peter Kenneth will package themselves as “change” during the forthcoming General Elections, yet they have been eating from the same plate as the corrupt Jubilee mandarins.

Peter Kenneth in particular is rumored to have been a middleman/broker in the fraudulent SafaricomGate CCTV tender scam, where over Kshs. 50 Billion was hurriedly allocated to the mobile service provider in order to facilitate Jubilee’s first grand heist. That money should have instead been used to improve the welfare of the Kenya police, many of who have to endure the indignity of sharing staff quarters between families.

Yet our EuroBond money is lying idle in Qatar National Bank as Jubilee tries to find ways to loot it, after their plans were revealed and US Attorney General Loretta Lynch alerted.

So in a nutshell, when we say that for-instance a person like Ory Okolloh is a StateHouse mole, it’s not some rubbish conspiracy theory.