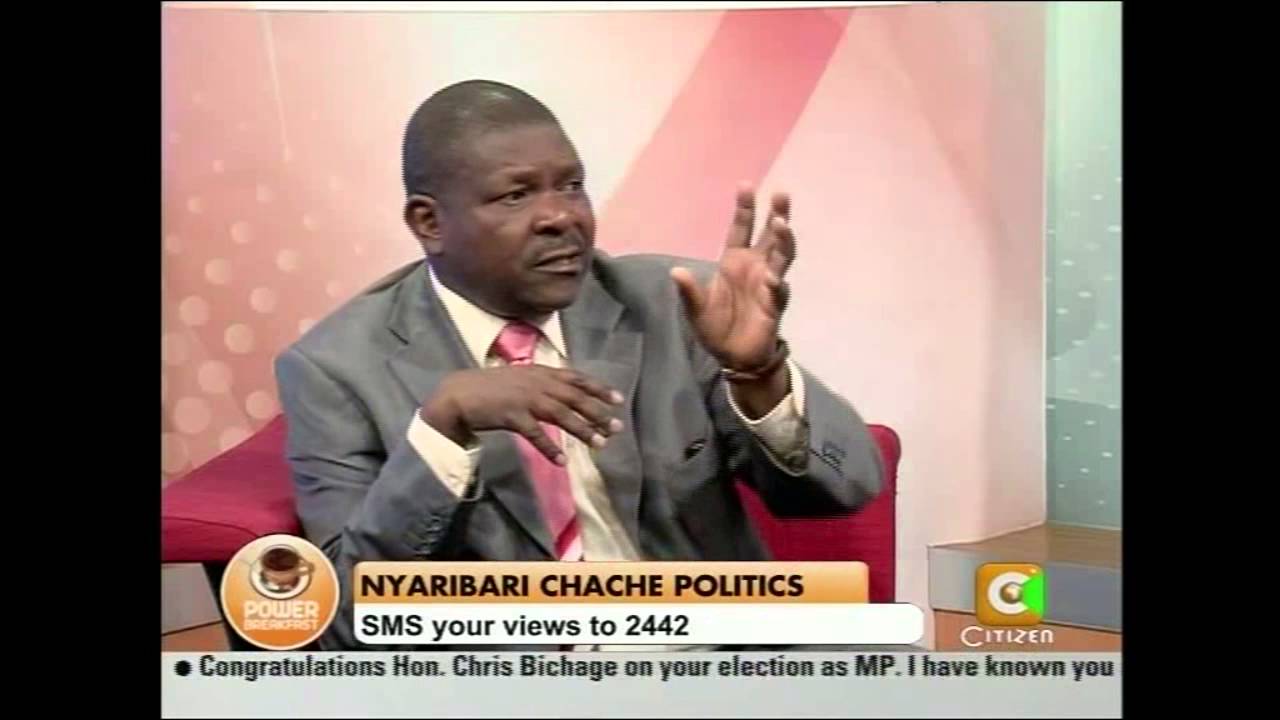 Caption: Dr. Chris Bichage
Dear Cyprian,
As a reluctant admirer of your blog and social media works, I hoped I would never have to engage with you in any substantive way, being shy of publicity. However, recent events have pushed me to change my mind.
My name is Robert Bichage and my father is the recently deposed MP of Nyaribari Chache constituency, Dr. Chris M.N. Bichage. Whereas I believe he is fully capable of fighting his own battles, the scale of media blackout and misinformation surrounding his travails in the courts have spurred me to at least try and come to his aid in whatever insignificant way I know how.
I am attaching for you the decisions given in court ( Feb 25th 2017 )  by the Supreme Court in the matters of election petitions 6 (Fred Outa) and 17 (Chris M.N. Bichage) both of 2014. I will understand fully if, due to the esoteric subject matter or any other personal consideration, you will be unable to digest and publicize these events for your readers. I do believe however that it is imperative that I try and convince you of the value of having the impunity of the judiciary, and specifically the Supreme Court with CJ Maraga at the helm as currently constituted, laid bare. 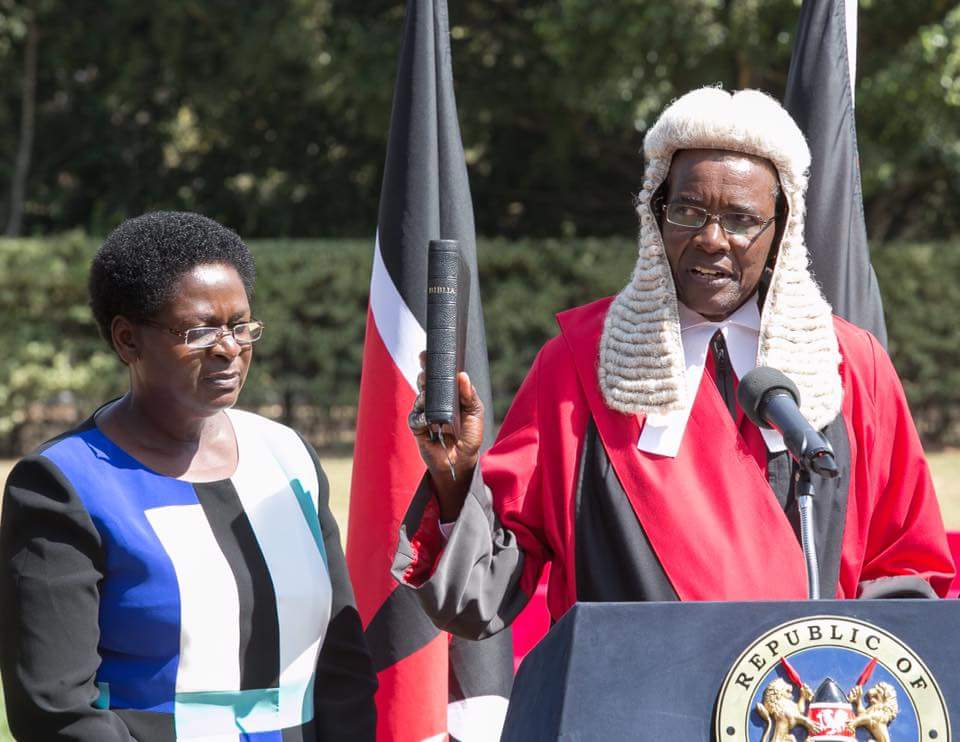 Caption : Chief Justice David Maraga swearing in.
The decision in the case I am particularly interested in, Petition No.17 of 2014, Dr. Chris M.N. Bichage Vs. Richard Nyagaka Tong’i, the IEBC and Robert K. Ngeny as respondents, was given with respect to an appeal based on precedents determined by the Self Same Court in the Election Petitions No. 7 of 2014 (Mary Wambui) and Election Petition 10 of 2014 (Joho). These decisions are freely available to the public on the Kenya Law website.

This case, having taken 4 good years against prescribed timelines of 6 months in the new constitution, has, through no fault of the petitioner, suffered many miscarriages of justice that I would have to write a book to detail, not least of which is having to suffer through not one but 2 final hearings and have a Chief Justice (Willy Mutunga) blithely walk away from an unconcluded matter that was filed under a certificate of urgency and moreover suffer not 1, not 2 but 3 notices of judgement which were summarily postponed literally at the last minute.

It is a bit of a long read, but to wit, the most relevant paragraphs of interest (at least as far as I see it) is paragraph 53. To wit, given that by their own admission, a case that is filed out of time is ab initio void (This was asserted in Joho, reaffirmed in Mary Wambui but in this case qualified by the puzzling modifier ‘prima facie’), can any constitutional process be birthed by that illegality? The ruling authority, indeed quoted in the Joho Case, avers that it is not the case. Indeed, Lord Denning said:

“… If an act is void, then it is in law a nullity. It is not only bad, but incurably bad. There is no need for an order of the court to set it aside. It is automatically null and void without more ado, though it is sometimes convenient to have the court declare it to be so. And every proceeding which is founded on it is also bad and incurably bad. You cannot put something on nothing and expect it to stay there. It will collapse…”
The Outa case was pronounced first so as to shut the door on any possible inclination to appeal the decision of the court, whether absurd, inhumane, plain wrong or scandalously unjust. It also makes for very interesting reading, touching as it does on matters of voter bribery and corruption.

The sophistry used to justify this decision was an Obiter Dicter (essentially a comment of the court, non-binding) in the Mary Wambui case (paragraphs 90 and 91) to the effect that judgements that create precedent can be applied retroactively provided that the cases they are applied to are not concluded. However, they fail to quote paragraph 86 of the same case which deals with the issue of nullity.

The Court itself permitted the petition despite a preliminary objection filed early in the case to have it dismissed on the grounds that it was of no value. Why would the Court address itself to a concluded matter and put litigants and indeed constituents through the pain of expensive and tortous litigation if the matter was concluded? Why not bury it at the time the P.O. was made and save everyone the trouble of almost an additional 2 years of litigation? Your guess is as good as mine!
Moreover, the Court did this with an admission that the Court of Appeal Case ruling that led to the by-election had ‘special circumstances’ that excused the late filing of the Supreme Court appeal (essentially addressed in paragraphs 49, 50, 51 and 52). And what were these special circumstances?
The court itself admitted that they gave a ruling dismissing Dr. Bichages appeal and vacating all stays and clearing the way for a by-election to proceed. However, since they did not give their reasons, Dr. Bichage was unable to file a competent appeal until the Court finally gave it’s reasons – 4 months after the by-election had happened! A by-election, by the way, which was based on the ruling of a high court without the jurisdiction granted in section 105 (1) of the Constitution to hear an election petition (since it was filed out of time, by their own finding).

This judgement may appear to the layman to be fantastically complex and unfortunately I do not have the smarts to unravel it and present it in a digestible manner. However, I do believe that regardless of any personal bias I may have, a grave injustice has been committed in this instance, one that I would be happy to break down if at all given the chance to illuminate the shenanigans the judiciary gets up to under the cloak of legal obfuscation.

I sincerely hope that I have not committed the cardinal sin of boring you and thank you for your indulgence. I know there is a lot that I have left out that may seem to make this missive merely the rantings of a sore loser, but I assure you I have an intimate knowledge of this case and can answer in depth any question that can be put to me on the matter and not only that, but that I will also do so with as much truthfulness as is warranted, should there be anything that you wish to know.

Once again thank you and with
kind regards,

Robert Bichage
Would you like to get published on this Popular Blog? You can now email Cyprian Nyakundi any breaking news, Exposes, story ideas, human interest articles or interesting videos on: [email protected] Videos and pictures can be sent to +254 710 280 973 on WhatsApp, Signal and Telegram.