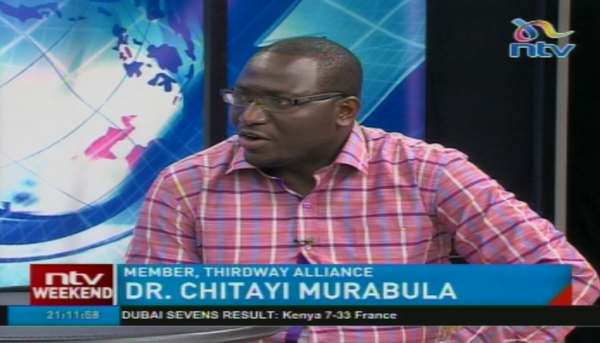 A recent post published on the cnyakundi blog titled ‘2011 doctors strike, How 3 individuals sold out their colleagues to uhuru for a few coins’ is gutter, utter hogwash. The article tramples on history with impunity, liquidating the dignity of the Kenyan doctor while randomly urinating on former KMPDU leaders’ reputation. Nyakundi deliberately sidesteps facts to attain a pre-meditated motive of slander.

The propagandist article opens with an icing on what soon turns out to be a completely rotten cake. The writer cleverly seeks credibility by giving a detailed narration of the historical events of the 1994 doctors strike in about four paragraphs totaling to approximately 500 words. It is quite an interesting read which should in any other circumstance capture the attention of the reader by sugar coating the poison to be served thereafter.

It is only when the taste of the sugar coating becomes familiar that one soon discovers that the lengthy historical introduction is plagiarized work from 2011. That’s when the reader realizes that he is reading the work of a certified fraud.

It is factual to state that half of Nyakundi’s article on the doctors strike of 2011 that was published on 11th March 2016 is plagiarized word for word from the blog , ‘Walter’s world’ penned by mr Walter Menya on December 8th 2011. The story was then written under the heading ‘Are Kenyan doctors in it for the long haul like their colleagues in 1994?’

A quick comparison of the two articles uncovers plagiarism-the worst form of intellectual dishonesty and a betrayal of intellectual bankruptcy on the part of Cyprian Nyakundi. At no point in his own fake ‘expose’ does Cyprian Nyakundi acknowledge that he has stolen half of the article and predictably the only factual part. The discretion to sue remains with Mr. Menya.

The rest of the article conveniently gives the truth a wide berth. It fails to state that the quest for a doctors union that started in 1994 was triumphantly accomplished in 2011 when young doctors overcame every imaginable barrier to get KMPDU registered. It is out of this commitment that on the day the new officials were elected as substantive officials, they announced industrial action.

The author remains pretentious; putting up a show to feign solidarity with the doctors while failing to acknowledge the gains made through the fledgling union then. He, for instance says, ‘After 9 days of industrial action that had cornered the grand coalition government and held it by its balls , a flurry of night meetings and “special delegates” meetings were hurriedly convened……’ I wish to inform the author that a workers strike is not a ball holding contest. Inasmuch as he is excited about that aspect, the leadership of the KMPDU executive council was pre-occupied with getting a salary increment for doctors and starting the nation on a path of better healthcare. KMPDU achieved its objectives.

Mr. Nyakundi may not be aware (or may not be interested in knowing) that negotiations had started way before the strike. The first meeting between the ministry of medical services was held between the then minister Prof. Anyang Nyongo and ourselves on 21st November 2011. When the strike ended we had been negotiating for over three weeks with more than five offers tabled and rejected by our union at various instances. The offer that my national executive accepted awarded doctors a 100% increase in pay. This has been lauded as probably the highest workers gain from a single strike in the history of trade unionism in Kenya. If in your opinion the strike should have gone on, am sorry the national executive of KMPDU thought otherwise and made a decision to accept a 100% salary hike and reopen our public hospitals. There are no regrets. Doctors who were part of the 1994 strike have constantly given approval of our achievement in the 2011 doctors’ strike both then and now.

Also coming out of the 2011 strike is a document called ‘The Musyimi task force report.’ To date this remains the most comprehensive document on reorganization of healthcare delivery in Kenya. Mr Nyakundi I challenge you to read the Musyimi report, synthesize it and share it with your governor back home for local implementation. That will be of greater use to the mwananchi than your hawking of lies in the name of blogging.

As for the bribery allegations made in the same article, they sound like the incantations of a charlatan who having failed to give his audience substance gives them glorified rubbish. What is supposed to be the central theme of the article becomes a one liner concealed as ‘a theory that gained currency amongst the medical fraternity was that bribes exchanged hands.’ That’s underwhelming to say the least. The statement reeks of dishonesty and paints your blogging work as propaganda and yourself as a character assassin. Beyond that point a lawyer comes in handy and a court of law becomes a necessity.

The article sinks further into personality attacks even to the point of name calling. An article that without basis refers to an individual as a clown belongs to the dustbin. In this regard, and to prove you wrong, I invite you to a ‘who’s the clown now’ challenge where we can debate this matter.

The constitution gives all of us the freedom to belong to any movement and party. Workers’ unions influencing political activities is an old phenomenon and it is not even unique to Kenya. In South Africa the tripartite agreement signed between the ANC, SACP and COSATU in the 1980s remains in force today. Tom Mboya believed that trade unions should produce leaders and they did. Out of the Kenyan labour movement came the likes of Bildad Kaggia and Fred Kubai. During the 2013 general elections the late George Muchai was elected member of the national assembly while serving as the secretary general of COTU.

At this point in the history of Kenya, our workers must exercise the freedom to belong to a worker friendly party which will improve their wages hence their standard of living.

Bwana Nyakundi , kindly note that I have defended you many times when you are in custody. I am still willing to defend you on condition that the next time you sit down to pen your next propaganda article, do thorough research, don’t plagiarize the work of others and avoid making wild allegations against fellow citizens.