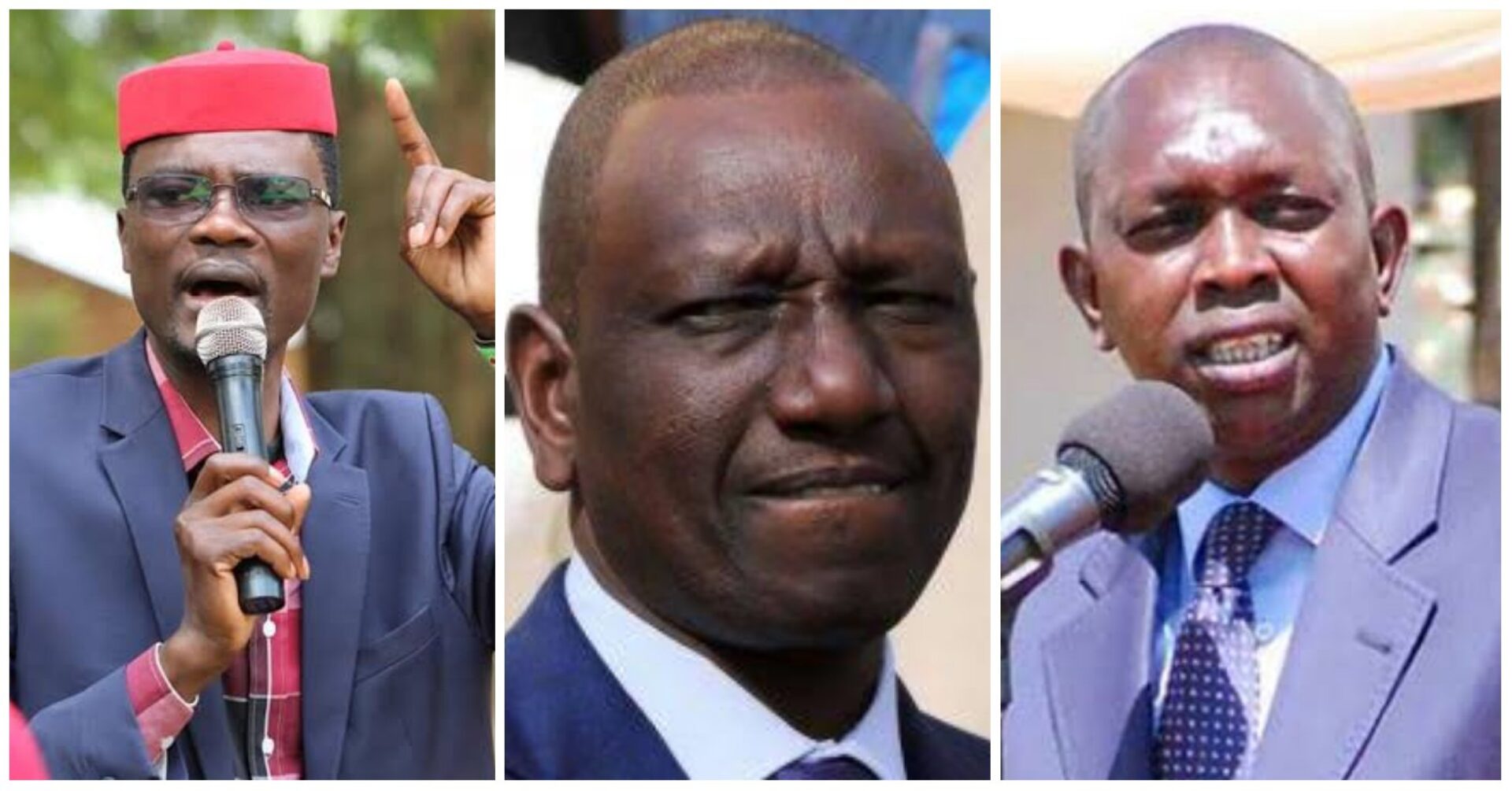 CAPTION: Kenya’s Deputy President William Ruto has expressed fears over his life, two of his top most ‘generals’  [pictured above] have in turn responded and reassured him of their support: despite whatever storm comes their way

This afternoon, Deputy President William Ruto declared “Enough is enough,” following what he described as continued political intimidation to block his 2022 Presidential bid.

He said he is aware of a huge scheme that has been orchestrated to destroy his office and his future plans but asked those responsible to leave others out of it.

“I want to tell those who are driving this agenda, they rather kill me but I will not be intimidated or slow down,” Ruto said in Solai where he attended the funeral of Sergeant Kipyegn Kenei, the slain Administration Police officer who worked at his Harambee House Annex office.

READ ALSO: Trap Laid Out To Corner William Ruto Ahead Of 2022 – Will He Escape?

Kenei was murdered just before he could record a statement with the Directorate of Criminal Investigations (DCI) detectives investigating a Ksh. 39 billion fake arms deal believed to have been orchestrated by ex-Sports Cabinet Secretary Rashid Echesa.

“If they Killed Kenei so that they can intimidate me then I want to tell them that I am ready but keep in mind that his blood will not rest,” Ruto said, sensationally claiming that “I am aware of what has been planned for me but I am ready.”

He mourned Kenei as a disciplined officer and finished off by saying that his killers would never know peace and should face the full force of the law.

The DCI has been mobilised,for political reasons,to discredit & destroy my office with all manner NONSENSE and to bring me down. Those in this scheme are boasting that I will not be there soon. Since the system cannot elect anybody, they can only kill. But there is GOD in heaven.

Hours after Ruto made these remarks, some of his allies have since taken to social media and reacted to their boss’s apparent fear for his life.

Those leading the evening charge were Kapseret MP Oscar Sudi and his Kimilili counterpart Didmus Barasa who sent out tweets which indirectly implied that if anything were to happen to Mr. Ruto then instant retaliation from his camp should be very much expected.

If anything happens to @WilliamsRuto a number of us who believes in his ideolody will opt to become wild animals and live in the forest.

Uhuru Kenyatta, if anything happens to @WilliamsRuto……. We are not STUPID. #Ruto
— Hon Oscar Sudi (@HonOscarSudi) March 7, 2020

This comes as section of ODM leaders on Saturday hinted at sponsoring an impeachment motion against the DP over investigations into the fake arms deal and Kenei’s murder.

Siaya Senator James Orengo said that the party will consider constitutional means in dealing with the DP.

“Watch this space. In two weeks we will start the process that will see us deal with him,” he said in Siaya at the funerals of University of Nairobi’s Prof Gilbert Ogutu and politician Omolo Rading’s son.

Party Leader Raila Odinga and a host of other ODM politicians attended the ceremonies.

During the burial of Sergeant Kenei in Chamasis, Nakuru County, Ruto described the deceased Sergeant as an obedient officer who was very professional.

Recalling their last interaction with Kenei, he said he summoned security officers to his office on Monday, February 17, 2020, seeking to find out what exactly transpired while he was away.

“We met on Monday of the week that he was found murdered. That Monday, when I arrived at the office, I summoned the head of security as well as the person in charge of escort in that office.

The two came into my office and I wanted to know what had taken place on the previous Thursday because that Monday was my first day at the office (since the meeting reportedly took place). The two briefed me about the occurrences and backed their claims with CCTV footage.

Since Kenei had colleagues in the same department, I called all three into my office and asked them what had transpired at the office and they told me.

Kenei told me that it was true he knew Echesa and he had received a call informing him that the former CS and his colleagues would be coming to the office because they had an appointment and he ushered them to the waiting room. Since investigations were still underway, I told them I needed the truth.”

Ruto said he went back to his office on Thursday and asked to meet the officers on duty one more time regarding the firearms scandal.

It was at this point, claims the DP, that he made a phone call to enquire the whereabouts of Kenei, including reaching out to some of his kin.

“After two hours we found out that he had been killed.”