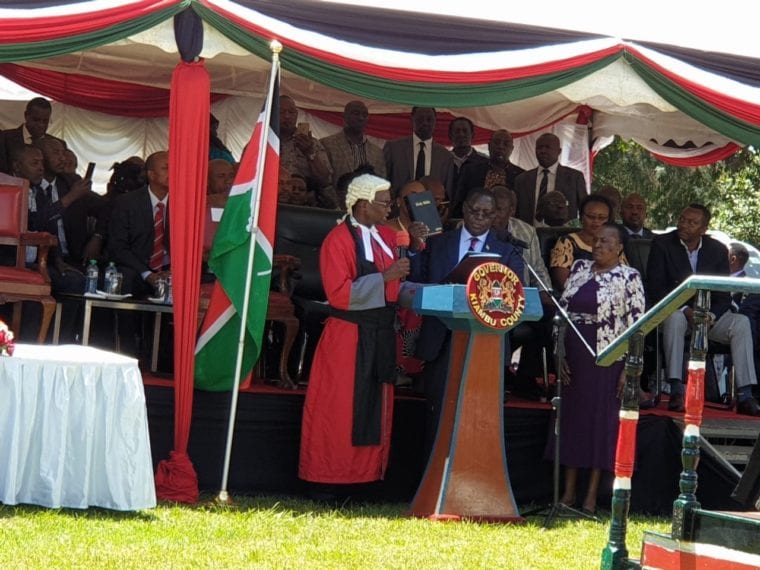 The current Kiambu County Governor James Nyoro was the Managing Director of Rockefeller Foundation based in Nairobi from November 2008 to August 2012.

During his time, one project was in the offing in and around April 2012. The Kenyatta National Hospital (KNH) digitisation project of 40 million records was supposed to be undertaken in phases.

Techno Brain, a local technology firm was one of the companies tasked with doing the work. The firm partnered with COSEKE, for the tender to digitise 10 per cent of the records.

“This is the first contract we are winning from the Government and is a sign that it is interested in growing local Business Processing Outsourcing companies,” Lakshman Manickam, Director Operations and Human Resource, Techno Brain, said in 2012.

In this first phase, four million records in the Ear, Nose and Throat clinics at the Kenyatta National Hospital, the country’s largest referral hospital, will be in digital format come September. The records account for 10 per cent of a total 40 million records at the hospital in need of digitisation.

The Rockefeller Foundation, through their Poverty Reduction funded the project that was supposed to take five years at a cost of Ksh35 million grant in the first phase.

Technobrain completed the digitisation of the records according to its part of the contract.

“With the new system, Doctors at KNH and other associated clinics are now able to access patient records online from their workstations unlike in the past where doctors had to request records registry or maintenance officials to search for them manually which was time consuming and resulted in delayed treatment. On the other side, patient had to confirm his / her National ID or other information for identification details which were entered in to the system and the complete patient case history was automatically populated within less than a minute or in few minutes”, Techno Brain’s Case study document on Scannign and Digitisation of Medical Records At National Hospitals.

What is not clear is what really happened to the other phases of the digitisation of records.

Online sources indicate that politics and bureaucracy of government got in the way.

One report calls the subsequent digitisation of health records as intriguing. A new firm Seven Seas came into the fray and there was an alleged scandal of Ksh4.7 billion shillings. Members of Parliament in 2018 wanted the terms of tender to Seven Seas reviewed.

The project entailed the establishment of a data centre at Kenyatta National Hospital (KNH) linked to 97 other county and sub-county referral health facilities, the National Hospital and Insurance Fund (NHIF) and the Kenya Medical Supplies Authority (KEMSA).

The delay of 10 months after the tender was awarded prompted a parliamentary inquiry. “There is an issue with the contract with Seven Seas saying the ministry had committed to give a letter of comfort to the supplier who claims they shipped the equipment but have not received the letter of comfort and thus they do not have the capacity to bring the equipment,” said Ms Sabina Chege, chairperson of the Parliamentary committee on health in 2018.

It is 2020 and it is not clear what has been done and what has not been done.

The corrupt medical agencies are reeling under the weight of stealing in their ranks by newly appointed managers who are close to highly placed and untouchable politicians in this country.

Just in case anyone else remembers: