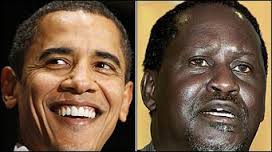 So in an anti-climax for the opposition over the weekend, US President Barack Obama was angered by the opposition CORD leadership and especially leader Raila Odinga. Why?

Obama said Sunday that some opposition leader had asked him to put checks on the Jubilee government whilst when he was in government, he had told off the US and western nations for doing the same.

He did not mention who the leader was but according to sources, the person in question is CORD leader Raila Odinga.

” There are some opposition leaders, I won’t mention who, who has been saying that that they want the US to check on the government and while they were in government, they did not want to do the same,” he told civil society leaders Sunday.

But who is that leader?

Back in 2009, this is what Raila said as regards western governments.

” Lecturing us on issues that deal with governance and transparency is in bad taste,” said the then Prime Minister. The continent is still recovering from an era of dictatorship and tyrannical leadership that many African countries struggled hard to dislodge. We therefore don’t need lectures on how to govern ourselves. We only require lectures on how to trade not only with ourselves but with the rest of the world to enable us prosper,” he had said.

He was speaking in reference to the then US Ambassador to Kenya Michael Rannergerger who had called on the government to fulfill its mandate without fail.

Also present at the meeting was other CORD leaders Moses Wetangula and Kalonzo Musyoka as well as Narc Kenya leader Martha Karua.

Karua had also had a previous run in with former UK ambassador to Kenya Edward Clay who she declared Persona non Grata in Kenya.