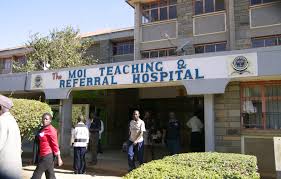 Three officials at Moi Teaching and Referral Hospital in Eldoret are implicated in multi-million shillings scandals. The three to the disbelief of fellow struggling staff are now living affluently with properties and fat bank accounts.
Julius Oraro, the supply chain manager has constructed rental houses in Nairobi’s Ongata Rongai using his relatives’ names. The registered company shows he is minimal shareholder. However, investigations reveal, the other majority shareholders do not work and do not even have bank accounts.
The officer is said to earn Sh250,000 from the investments. Apart from the Rongai projects, Oraro is said to own land in Rift Valley, Kisumu and his native rural home. His extended family members are said to hold private accounts where the money is allegedly chanelled through scandals are banked.
“Oraro demands payment before you are awarded a tender and does not entertain downpayment,” claimed our source.
Francis Kiprop, chief accountant is estimated to be worth Sh100 million both in real estates and bank accounts. It is claimed that a number of the companies that supply goods at he hospital are owned silently by Kiprop. One such notorious one operated by his lover Janet Boss who lives Elgon View Eldoret, it is claimed.
The woman acts as Kiprop’s proxy and whenever he flies to Nairobi from Eldoret, Janet happens to be on advance team.
Known is social circles FK or Finance King, Kiprop’s love for money is undisputed. One time, it is alleged, a supplier who wanted payment could not believe when FK showed him a cheque signed but demanded his kickback before releasing it.
Thomas Ngetich who is the finance manager is close to FK and strikes deals at time sidelining Oraro whom they refer to as a stranger.
Ngetich has also invested heavily in farming activities. Unconfirmed reports have it that he operates a transport firm with at least six lorries involved in ferrying goods.
Just like his other colleagues, Ngetich fearing Ethics Anti-Corruption Commission officers has transferred operations to next of kin.
At times, he pretends to be poor to hoodwink members of staff. Investigative reports reveal he has helped his people land lucrative tenders at MTRH.
According to sources, the trio is well linked to embattled MTRH CEO John Kibosia. Already, Kibosia is being probed on how he has acquired massive wealth running into Sh200 million. He is said to have secretly bought a three-storeyed building in Eldoret.
According to a report in parliament compiled by committee on health, eight companies were not pre-qualified to supply goods. The eight are linked to relatives of Kibosia, Oraro, Ngetich and Kiprop.
They supplied goods that included building and electrical materials. To falsify, quotations from other firm tendering were removed.
At times, goods that are purchased at a cost of Sh559,100 were paid at Sh694,550. Another of Sh417,000 was documented at Sh475,000.
To seal loopholes, the cartel splits orders at less than Sh1million.
Apart from tendering, Oraro and his allies allegedly even faked deaths of staff members to make a killing. Caroline Maina a deceased was paid Sh14,000. Oraro received Sh7,000 while Ngetich and Kiprop each shared Sh3,500 for what they termed fuel.
In total, the committee reports reveals Sh376,068 inform of imprest was paid to ghost sacked or those on study leave.
For example, Jacob Lagat was sacked years back but was paid Sh104,882 in advance. Jesse Opako on study leave was advanced Sh68,481, it is further disclosed.
Even as corruption rears its ugly head at MTRH with Kibosia being openly linked, politics has been introduced in complicating matters.
Sucked into the matter are youth from Elgeyo Marakwet who claim the call for demonstrations against the CEO removal are being fuelled and funded by politicians.
The youth led by Elvis Kipkosgei (chairman) Enock Kogo (secretary) Winnie Ndaluk (treasurer) say Joseph Sitienei, the man likely to replace Kibosia, is the main funder.
Recently, business in Eldoret was paralysed as hundreds of demonstrators invaded EACC regional offices along Uganda Road calling for investigations in multi-million financial misuse by top managers. As things unravel, the appear to be uncertainty on what happens next.

Citizen
Would you like to get published on this Popular Blog? You can now email Cyprian Nyakundi any breaking news, Exposes, story ideas, human interest articles or interesting videos on: [email protected] Videos and pictures can be sent to +254 710 280 973 on WhatsApp, Signal and Telegram.