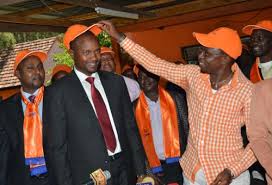 As campaigns for the Kajido Central seat enter the home stretch, it is now emerging that President Uhuru Kenyatta and his Deputy William Ruto considers the seat crucial and this has seen Jubilee coalition in a must-win strategy.
Schemes and counterschemes are being worked on to see Jubilee takes the seat. By late last week, word had it that the government side was planning to lure Cord candidate to step down as it happened in Gatundu South by-election where Uhuru prevailed upon a formidable candidate to step down in favour of Moses Kuria.
According to sources privy to Jubilee’s campaign strategy and agenda, the game plan is to win the seat as compensation for the Mathare constituency seat which Jubilee lost to Cord during the by-election. The seat was held by George Wanjohi of TNA but was snatched by ODM through Steve Kariuki.
In order to maintain its tyranny of numbers in parliament, Jubilee has vowed to take the Kajiado seat from Cord. The seat was held by Joseph Nkaissery who resigned after he was appointed cabinet secretary for Internal Security.
But even as Jubilee continues to campaign in Kajiado, we have gathered that within Jubilee, Ruto is worried of the political environment on the ground. Since the official campaigns began, Ruto has been a regular visitor in the constituency campaigning for Jap candidate Patrick Tutui. The DP is out to market Jap in the vast Rift Valley more so, among the pastoralist communities. Recently, Ruto held a meeting bringing leaders of the community together where the need to carry their political goods in one basket was agreed on. Sources say, at the meeting, it was agreed cattle rustling was a key player to their disunity hence need to disarm the communities.
But even as Jubilee continues to sweet talk the Kajiado residents with goodies, there is a serious rebellion in the entire Maasai community.
The rebellion in Maasai politics has seen ODM move in to capitalise on. Jap has Patrick Tutui as the torch bearer. Within Jubilee, Tuitui does not have grassroots support compared to ODM’s Memusi Elijah. As a result, Uhuru and Ruto have been reaching out to Memusa allies who defected with him to Cord upon being denied victory.
Another word on the ground is that Nkaissery is trying to play it safe and has been under pressure to back the Jap face. Ruto is using his ally senator Charles Keter to reach the grassroots. Keter was central in delivering a ward seat to URP in Trans Nzoia by- election. The battles between Moses Wetang’ula’s Ford-Kenya and Eugene Wamalwa New Ford-Kenya saw the Luhya vote bloc split in favour of URP winner.
That all is not well for Jubilee is seen from the attendance of their rallies. At a public rally Ruto held at Sankiloni-Inkinyie saw a handful attend while Kalonzo Musyoka on the same day was in Dalalekut with his rally well attended.
Already, fear is that the power tussles which have rocked Narok have spilled to Kajiado. Cord has, however, taken advantage of the Narok situation as a campaign tool in Kajiado. If they play their cards well, Cord can as well pull a surprise on Jubilee.
When Maasai legislators were arraigned in court, Cord leader Raila Odinga, Kalonzo and Wetang’ula were in court in solidarity. During the burial of a man who was shot by police during the protests against Tunai, Raila led his team and urged the Maa community to work with the opposition.
It is against such fears that have forced Ruto to mount his vigorous campaigns for Tuitui in Kajiado Central that even led to one person dying when a strong wind blew a dais at a political rally come homecoming party of Nkaissery.
Insiders say Uhuru is also in touch and has held meetings at State House with key players in the constituency politics.
Cord is also said be getting silent support from Bomet governor Isaac Ruto. Guv Ruto’s move to back Cord is aimed at DP’s influence in the region which he is also eyeing 2017.
It is now emerging that Jubilee and Cord are headed for a major onslaught in what could mark the beginning of a political duel running into 2017 polls. The victory or loss of it for any side may have lasting political ramifications. The ODM candidate Elijah Kanchori who had lost in the Jap primaries to Tutui is being said to enjoy the backing of the majority of his clan. During the Jubilee nominations, Tutui garnered 10,502 votes against Kanchori’s 10,100, which made the latter join ODM, where he was eventually nominated.