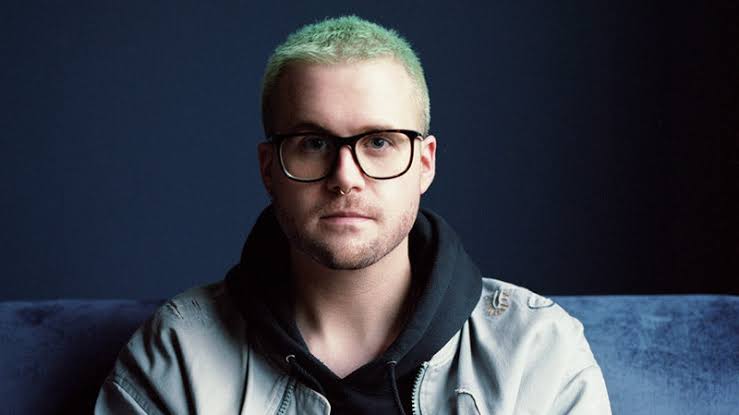 For a while now, it has been public knowledge that Cambridge Analytica, a controversial UK political consultancy, ran the campaigns of President Uhuru Kenyatta in the 2013 and 2017 Kenyan elections.

In 2018, social media giant Facebook announced that it was suspending the data firm from its platform after over violation of its policies on user data. This was after a researcher accessed millions of user’s data from the site and transferred it to Cambridge Analytica.

The firm confirmed its involvement in Kenyan elections to an undercover reporter for Britain’s Channel 4, last year.In the exposé that went viral, executives were taped saying that they ran “just about every element” of Uhuru’s campaign in 2013 and 2017, including rebranding his party twice, and writing the campaign’s manifesto and speeches. Also noting that they did “two rounds of 50,000 surveys.”

If it shocked you that Uhuru and Ruto breathlessly carped about Western imperialism and neocolonialism whilst still paying a Western firm millions of dollars to get them elected, fresh excerpts from 30-year-old Canadian data consultant Christopher Wylie’s book “Mindf*ck: Cambridge Analytica and the Plot to Break America” will blow your mind.

The book says that in 2013, the political consulting firm received payment from an unnamed African country through funds meant for the nation’s health ministry.

How this was achieved, you wonder? Cambridge Analytica was simply added as a subcontractor in a multi-million dollar project within the ministry.

The firm, Christopher Wylie says, made this proposal to the country’s health minister during a meeting at an expensive restaurant in London where he had gone on behalf of the presidential candidate.

“In late 2013, I was asked to join a meeting with a potential client in an African nation. This would be a political project, I was told, involving targeting voters ahead of an upcoming election. I didn’t know much about the country, but I assumed we could get hold of the necessary data through mobile networks, or public sources, so I said ‘Sure’. We met with the client, who turned out to be the country’s minister of health, at an expensive restaurant in London.”

As was agreed, a proposal for a subcontract sent by private British behavioural research company, Strategic Communication Laboratories (SLC) was received and approved.

Overthe next few months, millions of dollars from the health ministry were diverted to Cambridge Analytica via SLC. The money, cnyakundi.com understands, arrived from the country’s embassy in “diplomatic bags” in order to bypass any border inspections.

“I couldn’t believe the African project would play out as planned, but it did.”, says Christopher.

“SLC created a proposal for a subcontract and submitted it for approval with the ministry of health. Over a period of many months, as the health-related projects proceed, some of the money – millions of dollars – did not actually go to ministry of health programs. It was split between the minister’s political campaign and SCL, with SCL’s cut arriving from the country’s embassy in diplomatic bags so they could bypass any border inspection or declaration. I removed myself from the project early on, realizing it was morally and legally beyond the pale.” 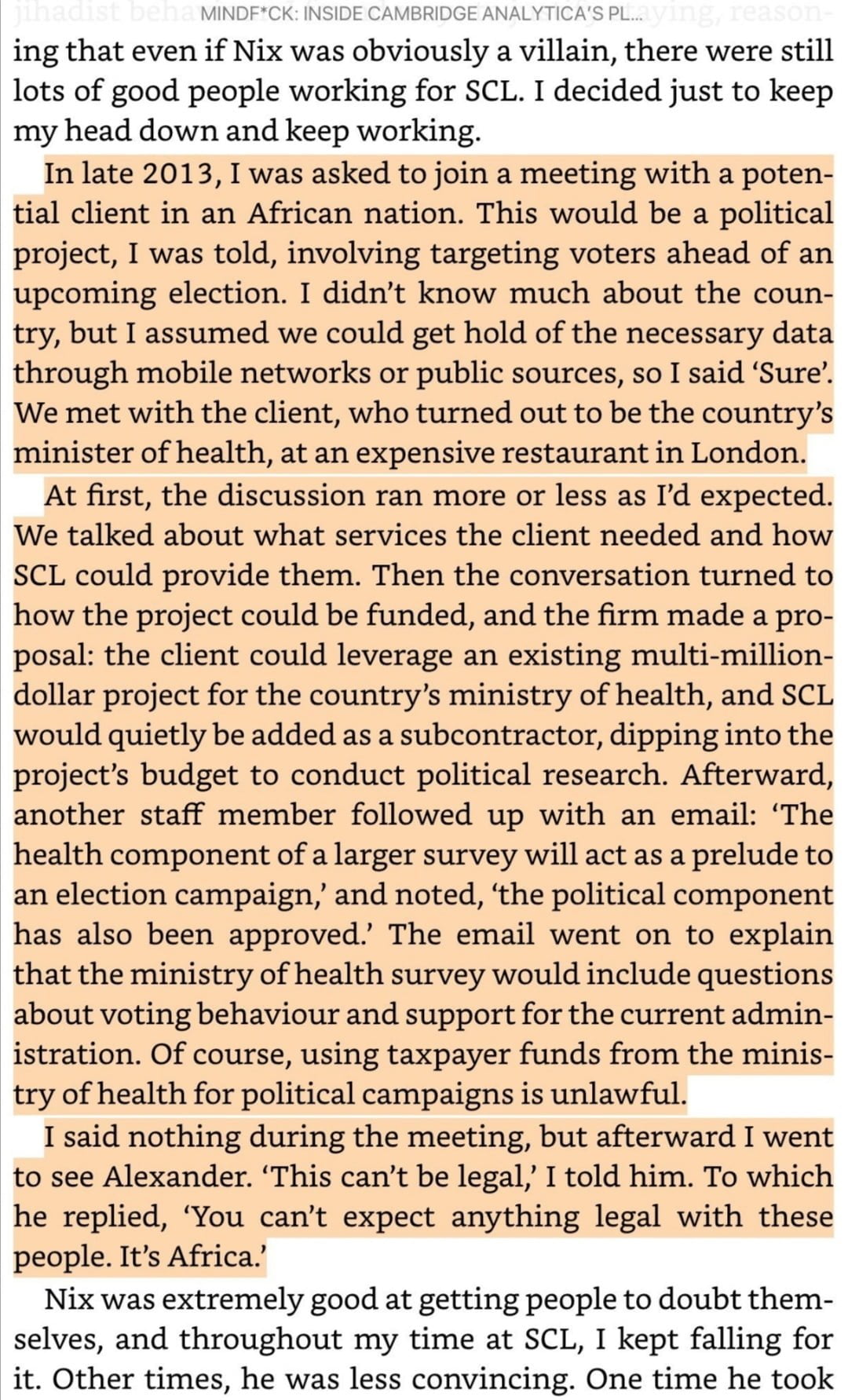 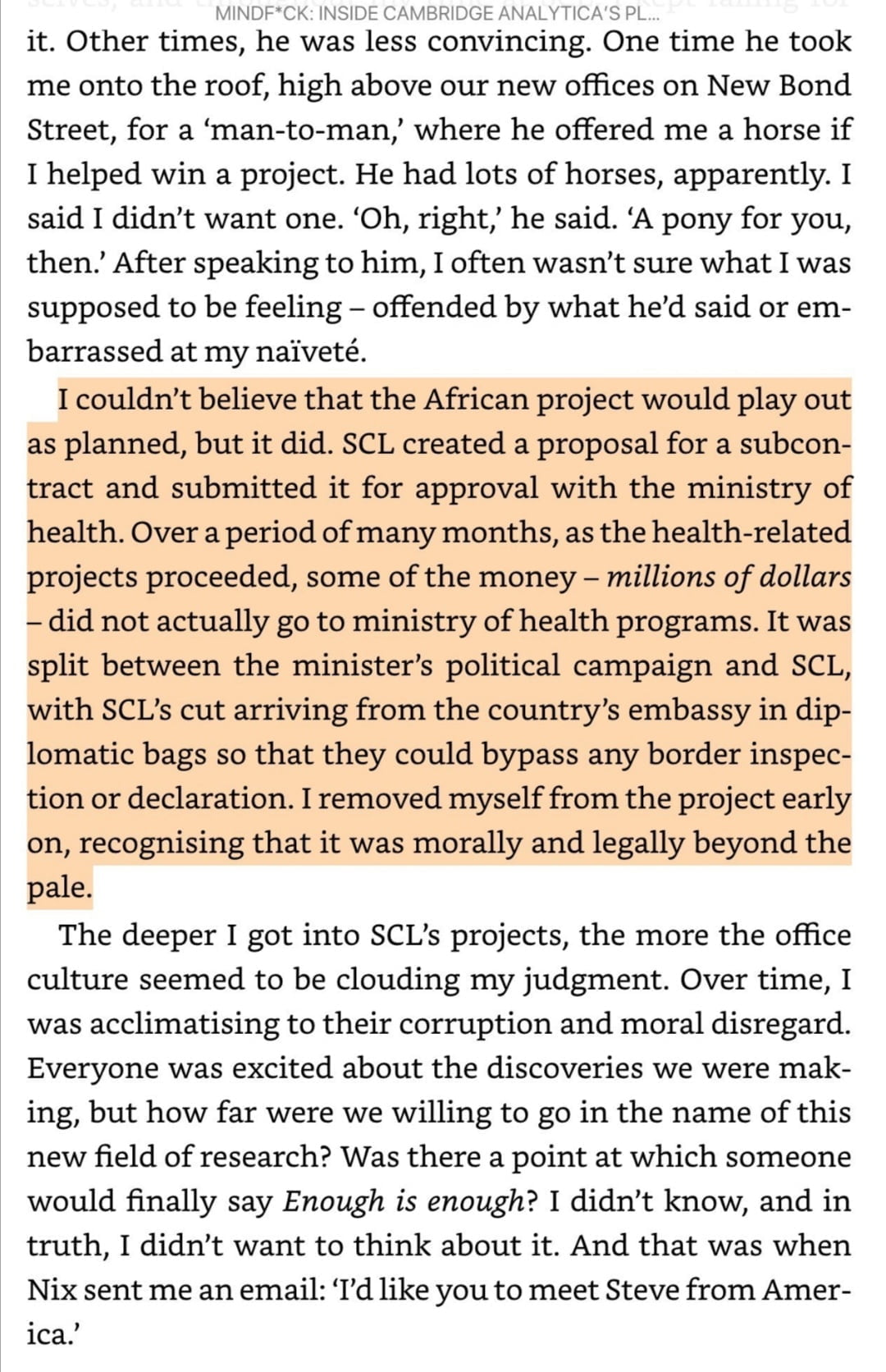 While we can’t tell for sure, many netizens, including Kenyan blogger Robert Alai and Researcher Rasna Warah are convinced the nation described in the book is Kenya, and understandably so, considering the countless cases of millions mysteriously disappearing from Kenya’s health ministry before and after Uhuru’s involvment with the firm.

This scenario in the “Mindf*ck: Cambridge Analytica and the Plot to Break America” book by @chrisinsilico, I think that the country being described is Kenya and the Ministry of Health did this. @bonifacemwangi @johngithongo @NdunguWainaina pic.twitter.com/x0zoFheYo5

So Uhuru did not pay CA with his own money but diverted money from the Ministry of Health? @johngithongo @DavidNdii https://t.co/bmmVBCEiOj

You can’t expect anything legal with these people, it’s Africa. Quote!

Remember the 8 Bn scandal that rocked the country in his first term..Uhuru's relatives were involved

There were multiple elections in various African countries in 2013, and the firm was (admittedly) involved in several of them. On its website, however, Cambridge Analytica clearly names Kenya as one of its biggest ever political case studies in the continent. This is in regards to the 47,000-person survey it conducted in 2013 to identify Kenyan voters “real needs (jobs)” and “fears (tribal violence),” as well as their “preferred information channels.”

Describingit as “the largest political research project ever conducted in East Africa.”

It’s parent group, SCL, describes similar activities on an archived page of its website, and says it also advised on communications, branding and strategy during the electoral period. 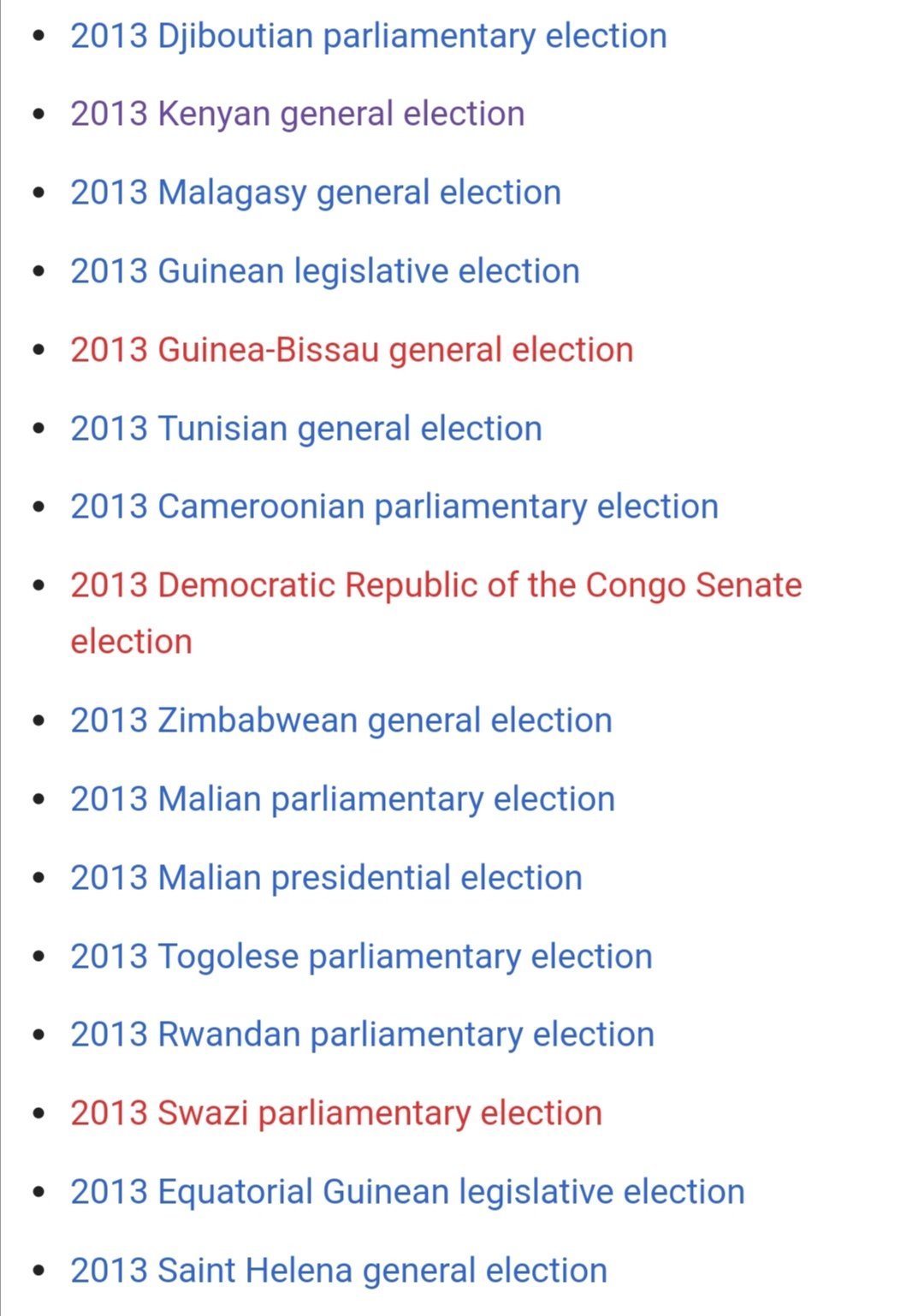 CAPTION: List of African elections held in 2013. Some opion that the country mentioned in Christopher Wylie’s book might not be Kenya as largely believed.

As the role of the firm in Kenya’s presidential elections in 2013 and 2017 continues to fall into place, it’s upon citizens to decide how to use this information which presents a classic case of how state mandarins connive to rip-off taxpayers during elections.