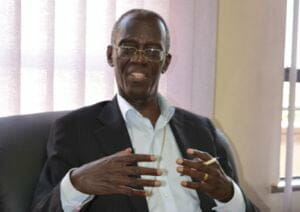 Unknown to many, the idea was first floated by a quiet bishop who is today the head of the Anglican Church of Kenya the Most Reverend Dr Eliud Wabukala, then bishop of Bungoma diocese.

In the wake of the mayhem that stalked Kenya after the 2007 presidential poll, Wabukala met fellow bishops in then Western Province and floated the idea of persuading antagonists Mwai Kibaki and Raila Odinga — both who had claimed victory in the presidential contest — to agree to a power-sharing formula, a suggestion that prompted bitter protests from some of his colleagues who accused him of being a pawn of either of the feuding parties.

When we met a few days later at Ufungamano House under the umbrella of the Inter-Religious Community, a number of leaders from other denominations, including South Africa’s Archbishop Desmond Tutu and the All Africa Conference of Churches got interested in it.

That is how it all started. It was adopted as one of the resolutions we presented to the Kofi Annan group at Serena Hotel. It worked. Not known to me at that time Annan was so fascinated with the idea.

I was surprised when in the middle of the night I got a call from him asking me to meet him at Serena over that particular subject. I went with NCCK General-Secretary Canon Peter Karanja to meet Annan who was very interested in understanding how my proposal could work.

We stated our position on the matter. We were happy when our initiative became the cornerstone of the National Accord power-sharing deal that came out of the Serena talks,” remembers Wabukala, not wishing to talk about the matter further.

Such is the character of the incumbent ACK Primate: dialogue and quiet diplomacy behind the curtains. Apart from being elected the 5th Archbishop of the Anglican Church of Kenya on April 24, 2009, he also serves as the international chairperson of the Global Anglican Future Conference, (GAFCON ) chairperson of the Fellowship of Confessing Anglicans and chairman of the National Anti-Corruption Campaign Steering Committee National Advisory Committee.

He has previously served as both vice-chairman and chairman of NCCK and Academic Dean at the St Paul’s United Theological College now (St Paul’s University). Primate Wabukala told the People Daily in an exclusive interview at his Bishops Gardens office in Nairobi:

“If we are honest with ourselves, we should admit that the Grand Coalition Government, with all its shortcomings, noisy pull-and-pushes, endless stalemates over certain crucial matters of national interest, it is the only government since our independence that has effectively functioned and served the people of Kenya.

The Archbishop accuses the Jubilee administration of “listening and talking too much with very little implementation.”

“I talk to them. I talk to the president himself. Surely he gives me audience. He is a good listener. That, I must give to him. But unfortunately everything ends at the listening stage. Nothing more comes out of our conversations. Implementation is a big problem to this government. This disappoints me a lot. I am sure I am not the only Kenyan disappointed in this rhetoric. However, my belief is that they can do better. They still can achieve a lot if they reduced the rhetoric and committed themselves to service delivery.”

As chairperson of the national anti-graft steering advisory committee, Wabukala regrets that corruption is deeply entrenched in the Kenyan society such that it requires the determination of all persons in positions of authority to join hands and collectively fight it. Says Wabukala: “Vision 2030 cannot be achieved without us first abhorring corruption. It annoys me that the people who talk against corruption loudly in public are the most corrupt and are the custodians of networks of corruption.

Most Kenyans believe that you cannot get services without offering a bribe. That is very sad indeed. Greed is swallowing our society fast. We must change our culture, attitudes and flawed mind-sets on corruption.”